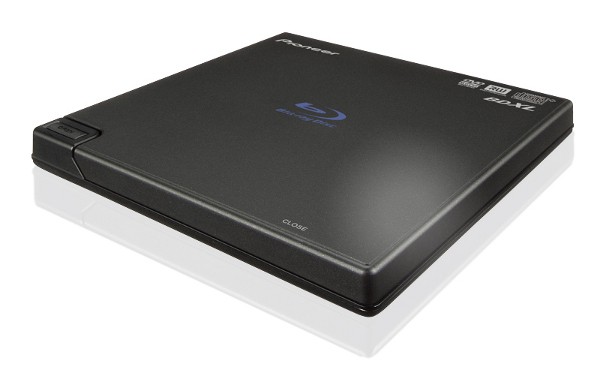 Pioneer Electronics, the company well known for audio and entertainment devices, has unveiled their new portable Blue-ray burner, the Pioneer BDR-XD04. The new device is the world’s smallest and lightest BD/DVD/CD portable burner which comes with  BDXL 1 support. The Blue-ray burner looks like an ultra-compact clamshell kind of a driver, which can read and write to any BDXL disc formats. This includes BD-R triple-layer 100GB media, BD-R quad-layer 128GB media, and BD-RE triple-layer 100GB media, as well as conventional Blu-ray™ discs (single-layer 25GB media and dual-layer 50GB media)

“As the popularity of drive-less ultrabooks continues to rise, the BDR-XD04 becomes the ideal accessory because of its compact size and portability,” said Steven Cohn, director of Optical Sales for the Home Electronics Industrial Department at Pioneer Electronics (USA) Inc. “There’s a growing need for a drive that’s highly transportable for playing CDs, DVDs and Blu-ray discs, as well as for storing valuable personal files on a secure, removable medium.”

The Pioneer Blu-ray burner will be made available thee end of January, for a price of US $149.99.