Dustforce proves beyond any doubt that any activity can be entertaining when you have to perform it in a videogame. With the adequate gameplay and functional mechanics, this indie game is every bit as amusing as SEGA’s Sonic titles, without the glamour radiated by every level. On the visual side, there is still much do be improved but for a small venture such as Hitbox Team, this omission is forgivable. 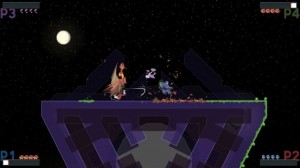 It seems like these guys have focused all their attention to improve the gameplay and make it addictive, while neglecting the visual side and even the narrative, but the result is satisfying. The story behind Dustforce is rather strange and it revolves around one character with a passion for dusting and the mad skills required to clean up room after room. In fact, there are four such characters to choose from but the variances are reduced to different speeds and hit boxes, so overall the experience is very similar.

What these characters have in common is the commitment to clean up levels fast and deal with the occasional threats they encounter on the way. It seems like dust has a negative effect on the critters as well, because until you get the chance to clean them, they are aggressive and try to stop you in your tracks. This opposition is not really convincing and if you time your combo moves well, you will quickly put them to rest. Just watch the cooldowns and you will be just fine.

If you would have all the time in the world to clean up a level, Dustforce would inevitably turn into a tedious adventure, but there is more than meets the eye about this game. Each clean sweep and every monster defeated adds some points to the combo, displayed in the bottom left part of the screen. The goal is to keep it growing at a steady pace, in order to unlock special stages.

Frustration is a part of any videogame and Dustforce makes no exception, as you will surely find out when missing a dusty area with just a few seconds left. Players are forced to replay the entire level, but with these taking a bit over one minute, they won’t be set back too much. Dustforce is an exciting game that would work just as well on Xbox and players are constantly encouraged to hone their skills and improve their score. The ultimate incentive are the replays where you can see the best players in action.

A valiant effort for Hitbox Team that deserves 4 out of 5 stars. Don’t take my word for it, see for yourselves: