DICE did a great job in keeping the high standards they’ve got us used with and resisted the temptation of cutting down key features for the sake of popularity. Battlefield 3 might not be a giant leap forward from the previous titles but it is still an excellent game, that will please both the dedicated fans and the newcomers who are bound to enjoy every minute of this installment. 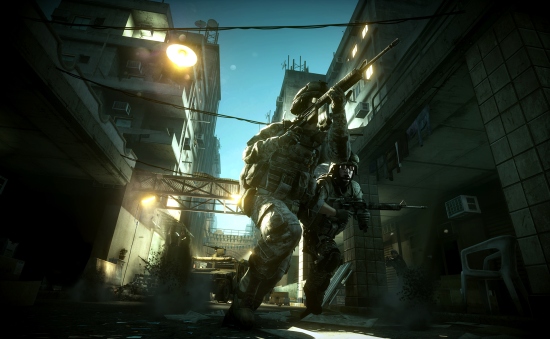 Give singleplayer a chance

Different locations are not longer just another excuse to add a couple of more levels and subsequently a few more hours of gameplay, but pristine mission providing an incentive to move further with the campaign. The only drawback is that the campaign still feels a bit too linear, and sometimes the limitations are downright frustrating. Fortunately Battlefield 3 features the same distinctive highly destructive environment as the prequels, and the odds are overwhelming that your prowess as a demolition man is equally important as, lets say, the sharpshooter skills.

Of course the multiplayer is where you are often required to blow things up in order to reveal a hidden foe, but the campaign features plenty of such occasions as well. As long as you’ve got the appropriate arsenal at your disposal, there is virtually nothing that can stop you from leveling a certain area. There are machine guns to choose from, some with alternate fire modes, sniper rifles that should give you the upper hand against enemies lurking in the distance and of course the rocket launcher. This particular weapon is essential when you must blow a helicopter out of the sky or dismantle an armored vehicle.

Unless you choose the easy mode to play this game, Battlefield 3 will put your skills to the test, thanks to the competent enemy AI and less supportive teammates. The opponents are more then capable of taking advantage of terrain, will always focus on flanking you and if that’s impossible will try to destroy your cover fast. Furthermore they are armed to the teeth and more then once I faced an untimely death, due to the inability of setting my priority in killing the right guy. Sometimes a foe wielding a sniper may be far deadly then one firing a rocket launcher, but if you fail to kill the latter, then he might just blow your cover to pieces and leave you exposed to a hail of bullets.

Interesting enough they seem less interested in annihilating your partners, and I think that’s for a good reason, since they are kind of immortal. While your teammates can sustain the damage inflicted by a long rifle burst and on special occasions, even a direct rocket hit, they have a low killing ratio. It would be unfair to say they are completely useless since they are capable of drawing a decent amount of fire and sometimes even deliver a deadly blow to an unsuspecting foe.

There’s really no way of being sure that your teammates are there for you at all time, but the closer you’ll get to this goal is by trying the multiplayer and playing alongside real people. Then again, there’s no guarantee that they’ll raise to the challenge, but at least there will be someone to blame. Without the multiplayer component this would probably be just another nice shooter to play over a weekend, but the online game is really the final frontier for Battlefield 3. With up to 64 players online in a match, some impressive maps available and different modes to try, it should provide all the adrenaline rush FPS junkies are looking for.