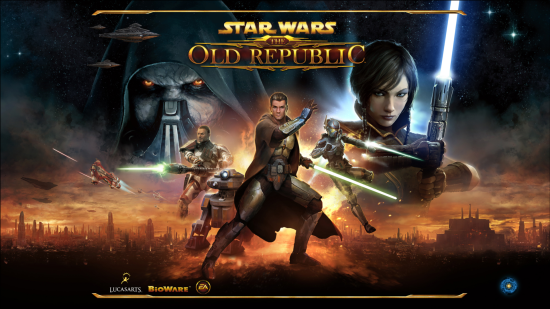 I wouldn’t even begin to say that I have had enough time in the game to give a proper review of it, but I have been playing Star Wars: The Old Republic since last weekend on my spare time.

This game has had a massive amount of funding with voice work, great audio sound effects and music scores that you expect from a Star Wars title.  This was probably one of the most expensive games of all time to create and it is top notch visually. 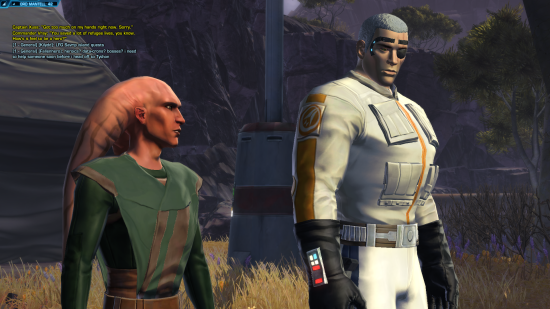 In playing the game you have two sides you basically can join from the start (Galactic Republic or Imperial Sith).  You have a choice of 4 character types for each side ( Jedi, Consular, Smuggler, Trooper) for the Republic side for example and you pick a race (selection of 4 as well) as well as apply some customizations (Face, hair, scars, size).  Overall I felt the amount of race choices was extremely limited for a Star Wars game where there are thousands of races.  I would have loved to create a bounty hunter that looked like Cad Bane, or a Besilisk Sith for example.  I didn’t like that the Zabrak which was first shown in Star Wars The Phantom Menace with Darth Maul was one of the primary races, it seemed overkill to see so many Darth Maul clones running around with only variation on horns and color patterns on their faces. 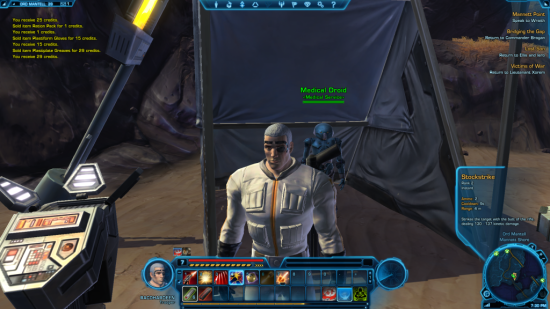 That being said, the MMO game delivers on story elements and unique features that help it stand out from other MMO games I have played.  The quests are enjoyable with minimal run and collect type of questing and the fact that you have choices that affect your “light or dark alignment” based on how you approach them.  You can choose to gamble in a runner game where poor refugees are forced to collect bombs hoping they are blown to bits, or you can simply shut the game down.  Your control over your choices no matter if you are on the Republic or Imperial side really helps you become attached to your character. 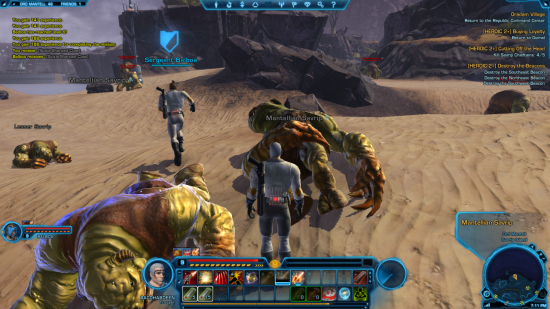 Teaming up is easy to do, you get a clear list of everyone on your Channel and joining up with other players takes a few minutes.  You can put markers over your allies so you can easily keep track of them when on screen as well, this is kind of important because so many troopers can look the same in the same gear and if you don’t always memorize the names of your companions you can forget who is who (Guilty). 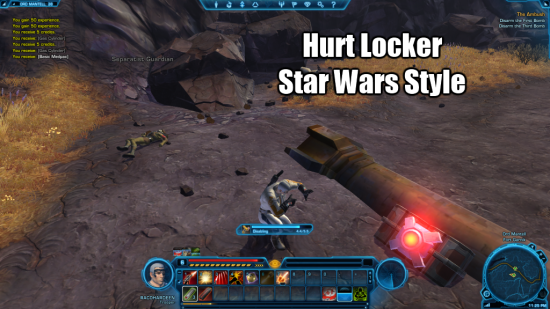 I barely reached level 9 and wanted to get at least my initial review and impression up on the site, and I enjoy the game but it does have a few elements that annoyed me a bit.

The first is that other than 1 or 2 abilities you can’t “attack” anything without clicking and targeting an opponent, you can’t simply just attack in front of you next to a creature with the game being smart enough to auto make that your next target.  With a ranged character and shooting blasters, I should have just been able to point and shoot at anything I wanted and it feel more like a Star Wars game where you had to have some real accuracy in the attacks.  The same with the light saber duels when I played a Sith Juggernaut.

I really like the choices of respawning with a medical droid on-site or having to respawn back at your last checkpoint area.  But sometimes if you fall down near rocks or scenary, when you respawn you can be trapped inside an object and completely stuck unable to do anything until you either die, or log out of the game and back in.  This happened to me 2 out of 3 times when I died in place trying to hide behind objects.

Star Wars Old Republic by default doesn’t let you click and walk, you must hold the WASD keys to move, and if you are attacking and moving it is cumbersome to move your hand to the 7,8,9,0,-,= keys while moving your character and clicking/targeting with your mouse.  You can remap the keys but this is a lot of experimentation to find what works best for you, it is worth investing the time in though.  Star Wars has up to 24 ability/item slots that you can map to keys and you will certainly need at least 10 by the time you reach level 9.

I am still at the beginning stages of the game but I find there is a distinct lack of weaponry for classes, you really have only 1 type of weapon and get various upgraded versions of that weapon.  Why can’t a trooper use a 1 handed blaster, or a vibroblade, why can’t there be more choices in how you want to define or craft your class.  This restriction just doesn’t feel right to me, I mean you have 1 melee attack (rifle butt) with your gun, but you should have the ability to use many different types of weapons and just take penalties using them.  There should be more customization in the weapon types and skill types so you aren’t so forced into one weapon only.  Again, this may not be the case after you reach a certain level but you are pretty restricted early on and I have been using the same blaster for the past 5 levels.  There does seem to be more armor variation between medium or light however.

Regardless of the limitations which some may be just from being to early on in the game, I am loving the game and having a great time.  It just feels great being part of the Star Wars Universe in an MMO and my kids enjoy watching me play at night.  Still the game isn’t cheap and at $59.99 for the game (1 month of play included) and $14.95 per month of play it is a very expensive MMO in my opinion, for this money I would expect to see vast expansions and improvements in the future at regular intervals.