If you are concerned about what will happen when oil runs out and you like real time strategy games, then there is a good chance to be impressed with Oil Rush. UNIGINE sends players into a world that was transformed after Judgment Day and is now completely covered by water, while people are fighting for dwindling resources. Oil has almost run out, which makes the remaining pockets even more important and large armies collide or engage in skirmished to control key nodes. The premise is interesting and developers did a good job in imagining the apocalyptic scenery but they could’ve done a better job in terms of gameplay. 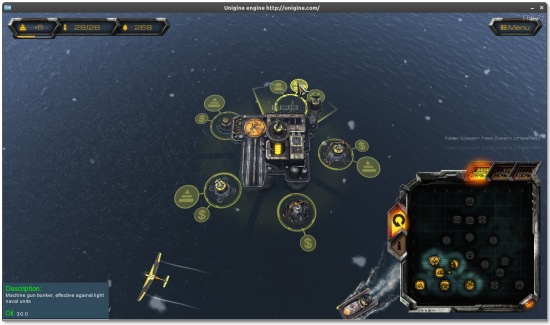 All those who survived the aftermath are now engaged in a bitter fight for oil and in this intense war, those who control the nodes emerge victorious. Just like in any respectable tower-defense scenario, troops are spawn automatically near these nodes, so the more you control the larger the army will be. In terms of units, there is not a large variety of troops that you can command in battle, with jet skis, battleships and attack helicopters making most of your army.

These few units can inflict a lot of damage when used in conjunction, but sometimes you will need to make the most of their individual abilities. Knowing when to choose mobility over resilience and speed over firepower can make the difference in your favor, but sadly there is nothing to do against a larger army. The odds are simply stacked against you when the opponent marches towards your poorly defended nodes and micromanagement or special tactics are not going to save the day.

Speaking of large armies, the player needs to rush the nodes and after establishing a dominant position, reinforce them with turrets. Just like in any real time strategy game, investing too many resources in fix defenses is a bit risky, because you will need the mobility of an army. The best defense is a permanent harassment and in multiplayer this becomes obvious, because you will face intelligent players rather than highly scripted AI.

The only problem is that at least for now, you will not have too may opponents waiting for you online until the game gains some traction. This brings us to the less favorable part of Oil Rush, which is the rather tedious campaign and the weak storyline. One of the issues that plagues both the singleplayer and the multiplayer is the fact that you can’t really control your troops in battle and each skirmish feels random. Oil Rush is worth checking out, so don’t hesitate to take a lot at the trailer, but in my opinion it deserves just three 3 out of 5 stars.