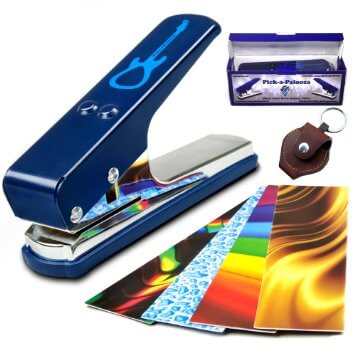 Hey there.  I’m a guitar player.  Not a professional one, thanks for asking, lol, but one that has been playing for the better part of 16 years now.  Once you have been playing for this long, you get comfortable with your gear.  That includes guitar picks… but those are the ones are easily misplaced.  I have lost so many guitar picks throughout the years that it’s not even funny.  And the worst part about it is that there will be times where even your back up pick to the back up pick will end up missing.  That’s just how the universe works.  Every guitar player knows that it comes with job.  lol  Anyways, it’d be great to be able to summon a back up pick at will.  That’s where Pick-a-Palooza fills the void.  The awesome people behind Pick-a-Palooza reached out to the guitar player of the Dragonblogger team to try out and review their pick creating device and I answered the call!  So let’s get into my experience with creating my own guitar picks using Pick-a-Palooza. 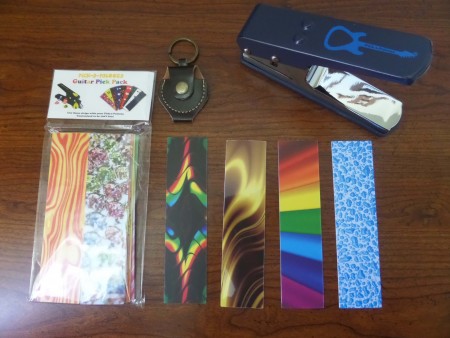 First impressions were mostly positive.  The Pick-a-Palooza closely resembles a stapler and works very similar to that of a hole puncher.  It also came a cool guitar pick holder/pouch with a keychain and a guitar pick pack with several strips of hard plastic with a variety of designs on them.  The idea is to insert one of the strips into the Pick-a-Palooza and punch out a pick.  Sounds easy enough.  Each plastic strip was good for at least 4 guitar picks.  I went ahead and punched out a few to see just how well they would come out.  I was pleasantly surprised to find that the guitar picks punched out fairly clean.  There were no rough edges around the guitar picks.  The one thing that worried me the most was that there would be rough edges on the picks.  Any rough edges on guitar picks end up scraping against the guitar string causing the string to eventually wear out quicker.  Last thing I wanted was to have to get new strings because I was practically sawing my string in half with a rough pick.  You can scratch that off as a worry when using the Pick-a-Palooza picks. 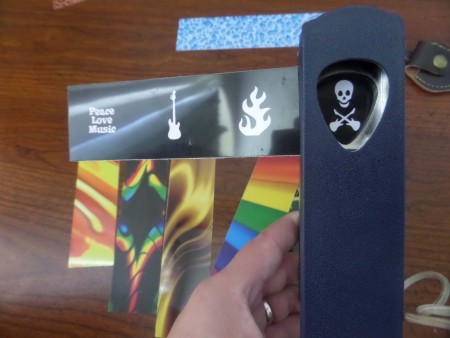 Secondly, I noticed that you had to put quite a bit of force to punch out a pick.  My 9 year old daughter struggled to punch out her own picks.  In the end, I had to do it for her.  This can be a good thing and a bad thing.  I saw it as a good thing.  Because you can insert any type of plastic in the Pick-a-Palooza (as long as it fits in the slot), you don’t want your kids making picks out of everything and anything they find.  Especially if they are mischievous and realize that daddy’s credit card is a hard plastic and would make one awesome guitar pick!  lol  The bad thing about it is that I have to punch the guitar picks out for them.  Sometimes they want to make their own picks and you can’t just hand off the Pick-a-Palooza to a kid and have them do it themselves.  It definitely is something that would be great if it was a bit more kid friendly, but essentially, you are cutting hard plastic so some adult supervision is not that bad. 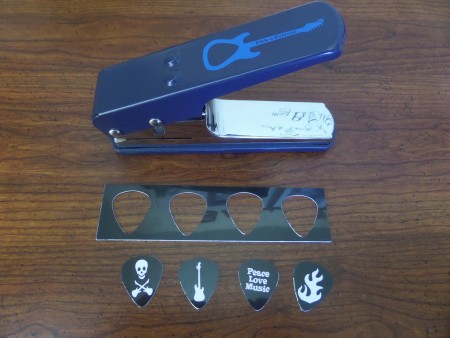 Now… the one and only gripe that I had with the Pick-a-Palooza is that the only way you can see you guitar pick BEFORE you punch it out is to hold it upside down.  It doesn’t sound so bad… until you realize that, with out the Pick-a-Palooza laying on a flat surface, you are going to need both hands to punch out a pick and the pick practically comes flying out when punched.  For example, the guitar pick pack came with some pretty cool skull and flame designs that I wanted to punch out.  But having to hold it upside, and then adjust the plastic strip to fit perfectly took a bit of coordination to do.  On top of that, you could not place the Pick-a-Palooza on the table, or any flat surface, because you’ll lose visibility of your pick and may end up punching out the pick with the design all chopped up.  When you punch it in mid air, the pick is going to fly into the air and land on ground.  That’s just how it’s going to be.  lol  I actually embraced this, “pick in the air” thing.  I took the Pick-a-Palooza to a kid’s birthday party and started punching out picks for the kids.  I had the picks fly into the air and the kids would try to catch em.  It was a great way to have fun with the kids and each one ended up walking away with a pretty cool guitar pick and party favor.  Win-win situation, if you ask me.  lol 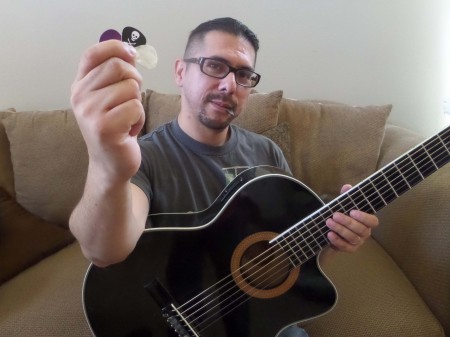 And lastly, their effectiveness as a guitar pick.  As the name implied, Metallman is into metal music.  I love playing Metallica and Pantera tunes on my guitar.  My guitar pick will need to be able to perform or its just not going to cut it to be a part of my guitar gear.  Using a pick from the guitar pick pack, the thickness of the pick was similar to that of a 1mm guitar pick.  But the thickness can all depend on what hard plastic you use.  After some use, I found that the guitar pick withstood the, Master of Puppets test, but I did find that the longer I used it, the more of the pick seemed to whittle away.  Hmmmmm….  In the end, I decided that, for a guitar player, the Pick-a-Palooza is best utilized when you need a pick right away and can’t find your regulars.  For non guitar players, it’s a great novelty item to have to create cool guitar picks to hand out to kids to play air guitar with.  lol