I usually don’t buy Early Access games because they generally don’t have enough content to justify the price, but when I read about how much content was available in Divinity: Original Sin 2 I had to take a look for myself.  I can honestly tell my readers that this early access only has about 25% of the game done and there are still missing features, dialogue interactions, even classes and skills are coming but there is no shortage of first chapter content and I put a solid 72 hours of gameplay in and was engaged the entire time.  This was 2 plays through one with Explorer mode and a full custom character, the other was in Classic mode with Sebille as my main character.

Divinity: Original Sin 2 like it’s predecessor is a turn based RPG game from Larian Studios that harks back to Baldur’s Gate and Neverwinter Nights type of games, I dare say Planescape: Torment was one of the most ideal games in this style from back in the day.  What you get is an RPG that has many interactions with NPC’s where depending on which character you have and what traits you have you open different dialogue options.  Having the trait “Pet Pal” is a near necessity too as you can speak to any animal in the game having conversations which can reveal side quests or simply talk your way out of combat with animals that you would fight if you didn’t have the ability to parlay with them.

I did some early video game recording and one thing I noticed is I couldn’t live stream, for some reason when live streaming via OBS (Open Broadcast Software) you could only see the landscape and background but not the character models in the game and there was horrible latency.  I am not sure what caused the streaming issue, so I was stuck using Bandicam for my video recordings, though I would have preferred to live stream.

The graphics are improved even over Divinity: Original Sin but many of the items, skills and equipment will be very familiar using the same portraits and drawings.  The way skills are done is a little more forgiving and your first level character is far more powered in Divinity: Original Sin 2 over the first one, with damages generally being in much higher ranges.  The sequel also focuses on being able to multiplayer with up to 4 people who can drop in and out of your game (or you can join their’s) instead of two player only like the original Divinity: Original Sin.  The odd thing and feeling about the game is that while you are leveling up your characters, you can see they will eventually come into conflict with each other and interviews with the developers as well as with some NPC interactions you get the feeling each NPC and therefore player has their own angle and it may come to a last man standing at some point in a later chapter.  This makes me almost afraid to give powerful gear to my NPC’s as I don’t want them to be able to overpower my primary character should the tides turn later.

There are so many side quests in the Early Access, again the developers say about 25% of the game content is this Chapter 1 which is escaping from Fort Joy, there are so many ways to escape, and paths you could take so unless you are actively exploring there is a lot of replay ability.  Even when you go into the final battle there are quite a few paths and ways to get a special purging wand, so depending your play style you can explore around.  I found that teleportation like the first game is so invaluable in being able to manipulate the turn based battlefield.  Leveraging your terrain, objects and even height where you get increased bonus, range and damage when on a higher surface than your opponents can allow you to make quick work of all your opponents.

Make sure you are saving often, there are some auto-save’s in Divinity: Original Sin 2 but they are few and far between so you can die all of a sudden with little notice and if you aren’t saving the game frequently you can lose quite a bit of progress.  There is one section where you want to click to have your characters move to a different part of the map, and there could be traps, bombs or just poison terrain and your characters will sometimes just walk right through the danger, get stuck and not find the safest path.  I was in Fort Joy right before the final battle and just decided to click on the map near the final battle hoping my characters would walk all the way there safely as I cleared all content, but they died on the way off screen because of one part of the island where these plants keep burping out electricity, poison and whatnot.  They got stuck and died in that death trap, though they should have had other clear paths the AI could have taken.

Unlike other games where monsters respawn, this game you can talk to or kill just about anything and you can trade with enemies right before you fight them which is recommended.  So when you kill or wipe out an area nothing comes back, it leaves emptiness in your wake, so if you go on murdering most of the NPC’s and folk you end up with an empty island where you killed everything.  Inventory is not hard to manage though there could be a sort option and a way to quickly sort items or mass send entire backpack from one character to another, you often will pump up bartering for 1 character so you get the best deals but don’t want to waste your valuable skill slots adding it to more than 1 character.

Crafting is just as rudimentary as the first game where you can only mix 2 items together to craft something new, usually this is a mushroom or something and a potion vial, or nails and an empty grenade which is very valuable, but I have only found combo’s that make primitive weapons nothing to exciting so far in the early access, though expect more to come.  In the Early Access you only have access to Level 1 spells and a few Level 2 spells near the final battle, you only really start seeing the “Source” magic and power toward the final part of the chapter and you can tell that Sourcerers are going to be key here in their abilities which are above the common.  After all you are playing a “godwoken” character in the wake of all the gods being dead, and these creatures called Voidwoken are spawning and attacking whenever source magic is used.  The story is interesting and plays along well if you were a fan of the original where you were a source hunter, the game has a dark tone and some of the dialogue is grim and depressing in Divinity: Original Sin 2 but it makes for a gritty RPG set in a land where humans sacrifice magic users in an effort to keep the voidwoken at bay.

Sebille to me was the most interesting character who was an elf enslaved by the Lizard who fought for her freedom and seeks revenge, she tattoos the names of her victims on her body and she is a flesh eater, able to eat body parts and absorb/learn new skills from the dead she eats.  Literally have her eat an arm, leg, or head and she may learn a new skill from just about any class that she adds to her skill list.  Lohse is another interesting character, overpowered with some of her spells but she has a way of talking to spirits who inhabit her body, there isn’t much there in the initial chapter but I expect there may be more following in later content.  In the meantime, if you are a fan of turn based action RPG games and have played Divinity: Original Sin or Pillars of Eternity you may want to check out Divinity: Original Sin 2. 70+ hours for Early Access content is certainly more content than you get with some full release games nowadays.  I can’t wait to see how this one keeps evolving over the next 6 months or whenever it reaches full release. 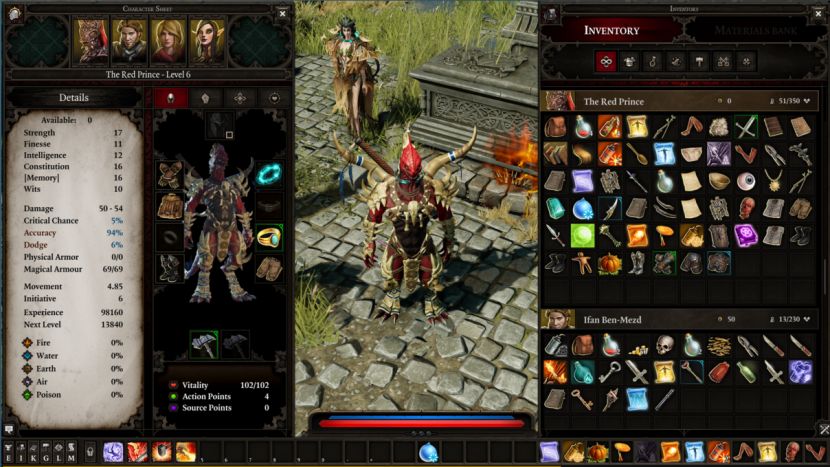 I won’t spoil it too much, but if you have any questions feel free to ask in the comments.  I pretty much exhausted all content in every dialogue, quest, side quest and killed just about everything including the final battle which was EXTREMELY hard.  The final battle is one of the most challenging out of any game I have played and I had been killed and had to reload half a dozen times before finding a strategy that allowed me to win, really by luck almost.