When it comes to the new consoles, PlayStation 5 & Xbox Series X, the questions we want answers to are: How much will PS5 cost? How much will Xbox X cost? It’s not that the gamers only care about the price, but it makes sense why it is so important to them. The new console will require a certain amount of money, and if you want to save for it, you must know it’s the price. The console cost can either make or break, particularly now while COVID-19 affects so many jobs, making people have less money than usual. There are more than a few ways that the COVID 19 Crysis can damage Sony, but we’ll mention the two most important ones. The first one is that the crisis can affect manufacturing. The second one is that the sale rate will be significantly lower simply because many people have lost their jobs worldwide or have a lower pay grade.

Both consoles (PS5 and Xbox X Series) are going to provide significant performance improvement compared to their previous versions, so it’s only reasonable to expect that the price will be higher as well. New entertainment rigs feature personalized processors and storage systems that will stimulate higher data speeds and higher resolution than ever. These parts don’t come cheap, and players certainly don’t expect the PS5 and Xbox Series X to be as budget-friendly as predecessors have become. That’s why both Sony and Microsoft try to avoid announcing the price before the other, but a recent leak from Carrefour might spoil the business tactic for PlayStation 5. With no surprise the digital version is cheaper and will cost a $100 less as it requires less components, but there is actually another benefit of buying the cheaper digital version of the PS4, and it’s even more significant when it comes to saving, that’s simply the cheap cdkeys or digital download games that you can purchase on from third party resellers that buys them in bulk and resell them for up to 80% cheaper than the traditional and old fashioned discs.

Carrefour is one of the most popular retailers in the whole of France, and they have legal stores in the whole of Europe. Carrefour announced that they would take preorders for PS5 and Xbox X starting very soon.

Yet Carrefour also briefly showed all of Sony’s PlayStation 5 models that were revealed a few weeks earlier, along with detailed information on the prices. A popular French website, PhonAndroid, managed to capture the screen below that had all the information about the future prices. The page was deleted quickly, but not before the screenshot with prices is obtained. The speed in which such listings have been deleted may indicate that they are real retail rates and not just placeholders.

The PS5 Digital Edition costs around 399 €. As for the standard PS5 edition, people will have to pay about 499 € if we can rely on the leaked information. Such prices are pretty much similar to the amount that all PlayStation fans expected. The standard PS5 will cost around 100 dollars/euros more than the diskless model, depending on whether you’re buying it in the states or Europe. If these rates are genuine and not placeholders, we must warn you that they contain VAT so that the final price may vary slightly. 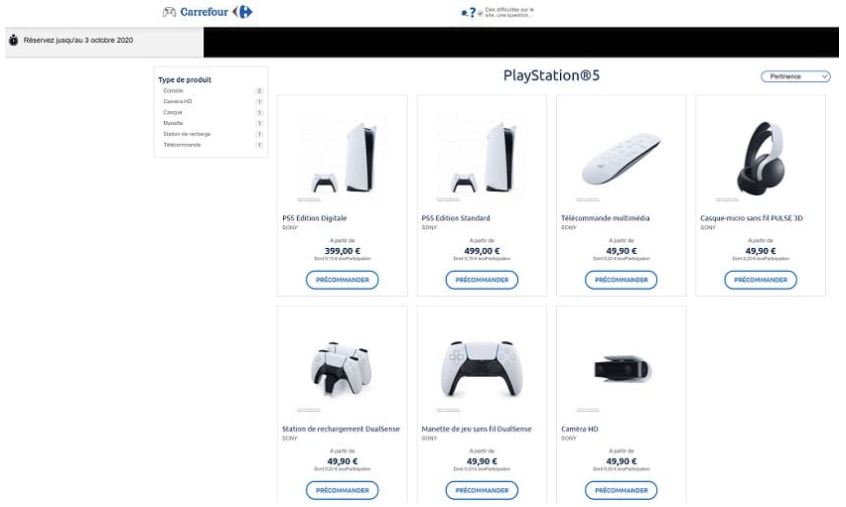 Sony’s PS4 marketing strategy will be more effective in guiding us in the proper direction to figure out the price for the US market. PlayStation 4 release costs were 399 dollars, 399 euros, and 349 pounds. If Carrefour collected data were right, the PS5 digital version would cost 399 dollars at release, while the standard model will cost around 499 dollars.

As for the accessories for the new PlayStation 5 price, there’s something that confuses us. Every accessory has the same price (49.90 EUR), which doesn’t make any sense. Yeah, it’s a regular price for the controllers, but everything else should cost much less. As soon as the French retailer found out that the news had spread, they removed all the info about the prices. As for the Xbox Series X, the price still hasn’t been published, but Carrefour will have the new Xbox in presale as well.

The Advantages to Buy the Digital Version of PS5

In this part, we want to discuss why it is better to buy a digital version of the new Sony PlayStation 5 instead of buying a physical one. It’s not just because PS 5 digital is cheaper; there are other benefits as well, and we’ll try to represent them to you as best as we can.

One of the main advantages of having a console is the price, of course. You’ll pay less for the console. But yeah, we hear you; you’ll be stuck with only digital copies. This shouldn’t worry you. The thing is that physical copies always cost more, and that’s because the BluRay disk itself costs between 10$-20$. The store where you decide to buy your game also has to earn something, there are shipment costs, and for all these reasons, digital versions of the games are simply much cheaper. The PlayStation Store has huge discounts on games every month, so you’ll easily get your favorite games at low prices. Also, there’s a possibility to pay a subscription to PlayStation Store, meaning that you’ll get a new game every month. And it’s not a rare thing to get a premium game with this subscription.

Another reason is that you can buy games from online retailers. One of the cheapest is Cdkeybay a video game price comparison website that lists all the places where you can buy the game cdkey codes, dlc’s and other content cards. They don’t sell anything, but they have a fantastic search engine that will crawl through the web, finding the cheapest option for any title you choose. It means that you’ll be able to buy the game even cheaper than you hoped for. It’s much easier to find a reasonable price on the whole web market than to visit a few stores in your neighborhood and hoped one of them would have a lower price. The internet market is enormous, and sellers compete with the prices all the time. When the games will be released be sure that you’ll find there the cheapest website to buy PS4 & PS5 games.

To sum things up, the digital version of PlayStation 5 is the best option for everyone that isn’t crazy about physical copies of the games. It’s also much easier to sell the game once you have enough of it if you have a digital version. In addition, online marketplaces will have the cheapest games for PlayStation and Xbox, and you won’t have to wait for special discounts from the stores. So do not hesitate, purchase the bargain PS5 and save even more on the digital games.