So recently Passion River Films reached out to us asking for a documentary review and we haven’t reviewed movies for a while, so both Brian Alford and Geoffrey Marks from the DragonBlogger team hooked up a movie night and watched the movie together.  This is a two author review of the documentary Poverty, Inc.

I really wish I could say some of these same things about Poverty Inc. a movie directed by Michael Matheson Miller in which he uses this particular documentary to discuss the importance of poverty and how it effects both sides. Those who are in poverty and the charities who gain from poverty itself.

This film discusses the idea of how poverty can be used as essentially a money making machine and tries to give viewers a view of what actually happens to the money people donate to charities or non-governmental organizations and exactly how that money is spent in places where poverty hits the hardest.

The documentary does a very good job of giving the viewer several examples of how the rest of the world tends to view such places as Haiti or Africa and how we typically view these areas as people who do not know how to live on their own or without the help of said NGO’s. One example the film provides is the overabundance of rice in Haiti and how the value of rice in Haiti is next to nothing due to the U.S. constantly dumping more and more rice there which causes the value of rice to drop and thus no one in Haiti being able to make any sort of profit off of it.

Another thing the movie discusses is how some companies who are trying to do right here in America actually can end up hurting other countries overseas. One example of this the film talks about is the Toms line of shoes and discusses how organizations such as Toms can hurt cobblers over in countries such as Haiti from being able to sell shoes.

Poverty Inc. does a very good job in being informative about things that not a lot of us really tend to think about when it comes to these charity organizations. However, the thing that rubbed me the wrong way about this film is how in the about the last 30 minutes Miller decides to completely bash on Bono from U2, who is an extremely well known advocate for poverty in other countries as well as child hunger causes, which made me feel a bit uncomfortable as if Miller just wanted to use this film as a means to put someone down at the end. 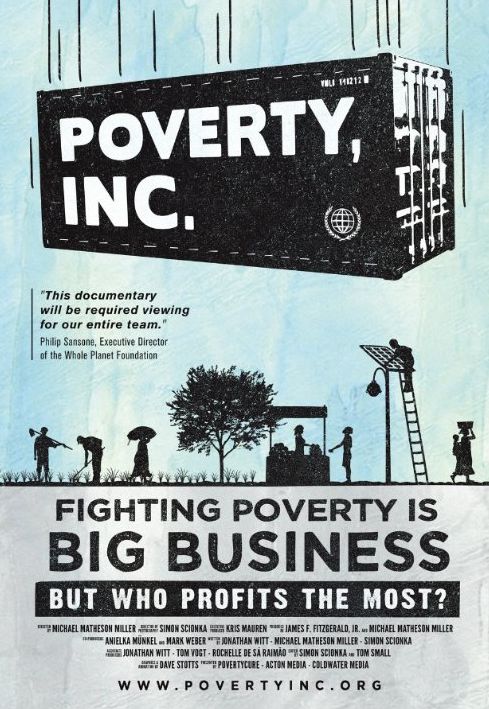 Which leads me to my last point, the ending. Remember how I said before some documentaries do a great job of providing a way in which the viewer can help or make a difference. This is an area in which Poverty Inc completely fails. The film ends with all this Bono bashing and no real way to let the viewer know how they too can make a difference in the lives of so many or how they can help the cause. I strongly believe that if you are to make any sort of documentary such as this one where you show your viewers a problem that you should also present to them a way in which the viewer can help in some way.

All-in-all Poverty Inc provides viewers with an insight on how charities work and the impact they have on poverty stricken countries without really giving the viewer any means or information on how they can help. I do however recommend that you give this movie a view so that way you too can learn a lot of things as I did about just how helpful or in some cases greedy these companies can be.

Michael Matheson Miller’s “Poverty Inc.,” is an eye opening documentary that highlights the essentially condescending view many first world citizens have towards those in poverty, and the industry that has grown around that view. As people develop more financial means, they inevitably use those means in charitable ways. However, the unintended side effect is that the money that goes into the labyrinth of charitable organizations, and not for profit NGO’s that are meant to do good in the world.

Miller doesn’t ask us to question our intentions, but to question the means by which we go about it. As it turns out the semi paternal views most people have regarding charities has lead to a “do it for them because they cannot do it for themselves” attitude that sees us providing goods instead of building infrastructure that allows the production of those goods. Why raise a cow when the milk’s shipped in for free? The unfortunate side effect is that third world countries that could have booming economies now have developed a pocket culture entirely revolving around taking advantage of the absurd donations and NGO aid plans.

While Miller initially suggests that this industry grew around the behavior, something more sinister takes hold as the film goes on. Particularly when it is pointed out that often, third world countries receiving these types of aid are not allowed open trade in the same way as other countries, and often do not have a voice on the world’s stage. It’s enough to make one wonder if these destabilizing behaviors may not be intentional? Miller hints as much when discussing the topic of the cotton and rice trade that could have been done prior to these aid dumps.

Unfortunately, if I’m being objective, Poverty Inc. suffers from some critical mistakes in it’s presentation. The movie seems to be broken into five chapters, and each of these chapters is informative and interesting. However, the structure of the movie itself is lacking. Instead of presenting the five issues, and then branching into each one independently, you are just dropped in to one of the points Miller wants to make. From there you wander aimlessly. Five chapters and the strange insertion of disco into a scene that definitely did not need it later, you arrive at the abrupt end of the film. “Bono isn’t that great, but he could be” says Miller, and then the credits roll. The movie is objective and informative, but it isn’t entertaining. This is a critical flaw in the film, and makes the movie difficult to sit through. Really though, those are the only issues the film has. The fourth chapter and the fifth should have been switched, and the theme of each chapter should have been stated at the beginning.
Still, it’s hard to be critical of a movie with such an important lesson. When we write that check for red cross, we feel good about it, but we never really ask ourselves where that money goes. Miller proves that it’s more complicated that we think, and in fact if we don’t do our homework, that charitable donation may go towards destabilizing an entire country’s economic structure. That’s exactly the opposite of doing good.