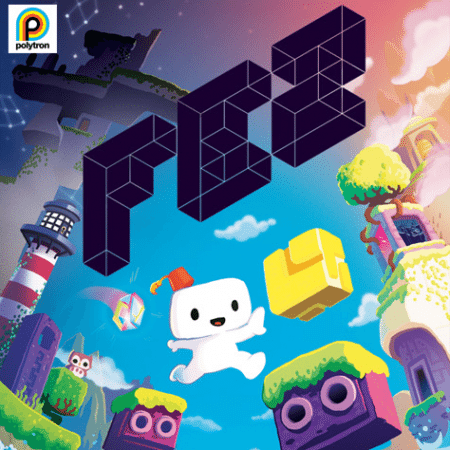 There are times when I want to just come home and load up a game where I can run and gun or really don’t have to think very much and simply just relax. However, there are times when I want to be challenged and I’m not talking about games where the difficulty is so hard that you just die over and over again (here’s looking at you Dark Souls) because I personally don’t enjoy just getting frustrated. I want a game that gives me a challenge, but at the same time is welcoming and one where I won’t be so easily frustrated. That’s where Fez comes in.
Fez was originally developed for the PC and the Xbox 360, but last month Fez finally made it’s way over to the PlayStation 3 and PlayStation 4 last month allowing Sony gamers the opportunity to have a crack at a game that has had quite a bit of controversy surrounding it due in part by it’s lead developer/creator Phil Fish.

Players control the character Gomez as he sets off on an adventure to find the pieces of the golden Hexahedron which holds all the other dimensions together. With the dimensions torn apart Gomez travels between the worlds searching for every last shard. There are 32 Golden Cube Shards and 32 Anti-Cube shards which makes up the Hexahedron and they are scattered over the course of a variety of worlds.

What I really love about this game is how it pays homage to games such as the treasure animation and sound from The Legend of Zelda whenever Gomez opens a chest or how you will spend most of your time solving Tetris tetromino puzzles as well as an entire level that has the graphics and sounds of the original Game Boy.

In Fez most of the game is centered around solving puzzles some of which can be pretty complex and will have you searching for hours trying to find out exactly what to and where to go next. What is great about the discovery in the game is that Fez will let you know when you have found all the collectables in an area by way of the in-game map. The map will highlight which area of the game you are in and if that particular area is in gold that means you have found everything there is to find in that area.

The controls of the game are very simple and are very easy for anyone to pick up and play, but you will find yourself spending minutes, if not hours, searching every single nook and cranny of the level to try and find that one missing cube shard to clear that area.

Once finished finding all 32 of the Golden Cubes you start the game in New Game Plus where this time around the game is more about code cracking than it is finding particular items which gives the game an average playthrough after collecting every single item somewhere around 10-12 hours. So for those of you like myself who really enjoy hunting every last item you will find yourself fully engulfed in this game.

What I really love about Fez is just how easy the game is to control. Fez provides players with such simple and fluid controls that allow anyone to be able to simply pick up and play it. Players are put into a world where the levels are three dimensional in a world that at first glance appears to merely be 2-D. However, with a simple press of the L2 or R2 button players are able to rotate the world which gives that three dimensional appearance allowing the player to view each side of the world.

Another aspect that I really enjoy the most about Fez is how Polytron decided to go with a more old-school 8-bit feel for this game which is what I truly believe makes this game shine. It simply wouldn’t be Fez if not for the look alone. Fez proves that you don’t need high-caliber graphics to make a game enjoyable and this game pulls it off so very very well. With very rich colors that really do tell the story in this game you at times will find yourself in awe at just how beautiful Fez really is.

If you’re looking for a game that gives you a lot of exploration and discovery Fez is most definitely the game for you. It is one that you will find yourself quite challenged as you sit in frustration at times trying to figure out exactly what you are supposed to do, but yet you will feel very rewarded once you complete many of the game’s tough challenges. I have a big appreciation for games tat don’t give players a choice on the games difficulty as I find that takes away from exactly what the developer intended and here in Fez we see exactly what developer Phil Fish had in mind for this game. I can only hope that one day he changes his mind and we get another amazing Fez game.