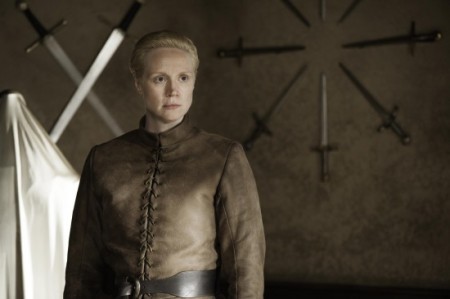 OK, before I get started let me start with saying Hi. I’m Lynda and I’m new to Dragon Blogger. I am a huge Game of Thrones fan. I have not read all the books but I love the show. I am only on book 2 so bare with me if some things get me excited only to break my heart later on.  As I am new here I will just start off for where the show is now.

Please be aware I will be talking about things that have happened in this episode so if you have not watched it yet be aware **SPOILER ALERT**  I will try to capture the episode as best as I remember it although it may not be all in order as the episode. 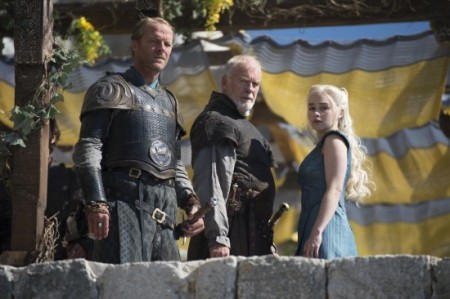 The episode starts off with Danaerys continuing to free the slaves of Meereen with Grey Worm and a few others from her ever growing army who go undercover dressed as slaves and sneak in through the sewers like ninjas to talk with the slaves and bring them weapons so they can free themselves.

Then we travel to the Wall where Jon Snow is teaching the men in black some tips on how to fight the wildlings that will be approaching soon.  I was surprised to see Locke there as he is not there in the books. I assume he is there to try to find Bran for Lord Bolton.  Ser Allister is angry over Lord Snow’s gain in popularity.  Allister and Janos Slynt conspire to give Jon what he wants: A trip to Craster’s Keep to kill Karl and the remaining awol members.  The only way he can have people go with him is if he can get volunteers. After Jon Snow’s big speech he managed to get a few, including Locke.

The next scene moves us beyond the wall to Craster’s Keep where it looks like a lot has been going on. Its starts showing Karl drinking wine from Lord Mormont’s skull while one of Craster’s “daughters”  sits on the floor next to him with her faced all bruised. There is sex going on all over like a frat house.  A woman comes in asking what he would like with Craster’s last born son. The other daughters start chanting and as he was about to kill the baby himself she tells him to make the offering to the white walkers.

Bran and his gang is not far from Craster’s keep.  They looked like they were about to go to sleep for the night and they could hear a baby cry. Bran slips into the mind of Summer and runs through the woods to try to find the baby. Instead they see Ghost (Jon Snow’s wolf) locked up in a cage. Just then it seems Summer has fallen into some sort of hole trap and is hurt. 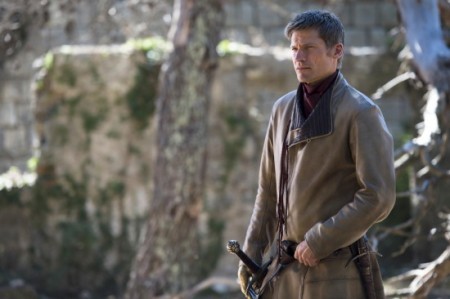 Back at Kings Landing Jamie and Bronn are having their sword training and have a chat about Tyrion. You can see in Jamies eyes that he cares and does not think his brother is guilty of killing his son. Jamie finally goes to the dungeon and visits Tyrion.  Unlike Tyrion’s relationship with his sister Cercei you can see that he and Jamie do care for one another. This puts Jamie in a tricky spot to be able to try to save his brother. Cercei on the other hand has asked Jamie to put more guards on Tommen’s guard for he is the future king.

On the ship Littlefinger and Sansa have a chat about what happened  with King Joffery.  He tells her that she did have a part to play in it as the necklace she was given a few days before and that she wore the day of her wedding was missing a stone. The stone contained the poison that killed Joffery and thanks to his “new friends” who made this happen.

This cuts us to Margaery Tyrell and her grandmother Olenna Tyrell having a conversation. Lady Olenna tells her that she had no intention of letting her marry “that little beast” and tells her how she herself was supposed to marry a Targaryen and her sister was supposed to marry a Tyrell and how she managed to get Tyrell to purpose to her instead. She tells Margaery that she needs to speak to Tommen and get him on her side before Cercei can turn him against her. Lady Margaery slips past the guard detail on watch of Tommen and sneaks into his room.  She has a chat with him with a soft heart and slight seduction. She makes him swear to keep their chats secret. She also got to meet Ser Pounce. 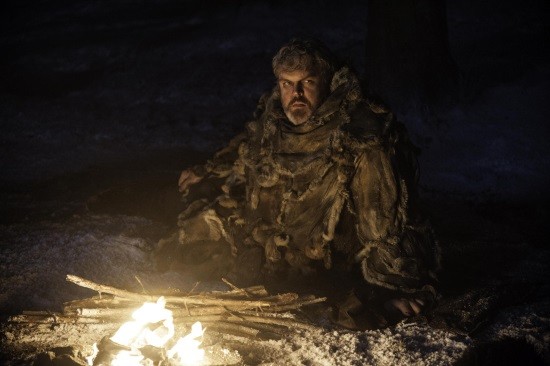 Back beyond the wall, Bran and company go to check out Craster’s Keep. They see Ghost locked up and notice the Nightswatch but quickly realize this will not be a friendly greeting. They were about to find another way around when all of a sudden they get knocked out. Next thing we see is poor Hodor chained to a post while a bunch of  ex-nightswatch stab and poke at him.  Cuts back in at Karl questioning Bran and Jojen Reed and his sister about who they are. Jojen is looking very ill.  Just then Jojen starts to have a seizure. Karl was about to further injure Jojen and to stop him Bran came clean about who he was and Meera tended to Jojen.

Jamie is trying to get back into my good books again ( its not working) makes an offer to Brienne.  He offers her his new Targaryen steel sword as well as some new armour he had made for her. He asks her to go in search of Sansa and to keep her safe.  They get her to take Podrick with her. This will give her an extra hand as well as keep Podrick safe away from King’s Landing. He asks her what She will name her sword. She named it “Oathkeeper”.

In the final scene of the episode we see the white walker has taken the baby. Ive been told this part is not in the books. He travels for a bit through some iceland until he reaches a what looks like a sacrificial alter. Another White walker walks over and picks the baby up and sticks his pointed nail into the cheek of the baby and the baby’s eyes turn into an iced blue like all the walkers.

Catch up on the latest episode of Game of Thrones, or get the whole season here!