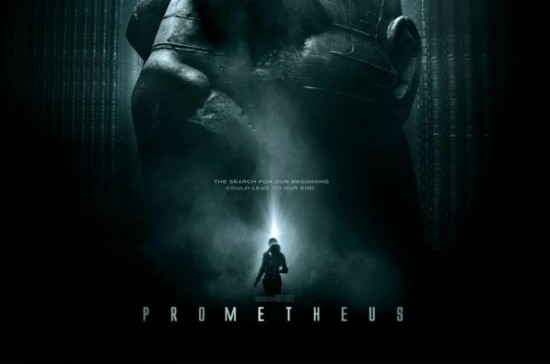 I admit, so far the movie reviews I’ve been doing are about films I’ve waited a long time for and really wanted to see. I’m going to start seeing some new movies even if I’m not anticipating it to write the review, but this film I’ve wanted to see since I learned Ridley Scott was on board. I admit, I went in a little biased and hoping it would be the knock down best sci-fi film of the year.

Archaeologists Elizabeth Shaw (Noomi Rapace) and Charlie Holloway (Logan Marshall Green) have discovered on Earth a number of carvings and drawings by ancient civilizations all across the globe that point out a very specific body in space. Based on computer computations, an expedition led by Meredith Vickers (Charlize Theron, who is on quite a roll) and supported by David the android (Michael Fassberger) heads off for the place the images seem to point to and true enough, they find evidence of space alien life that may have influenced mankind’s development. What they find is incredible, but once the investigation begins, horrible events occur that put the safety of the entire mission is at risk.

Firstly, I will reveal that there are no spoilers, so you can read away.

Simply, there is much to like, or even love about the film. For those who don’t know, the film is connected to the first Alien film Ridley Scott directed back in 1979. It is connected, but not exactly a direct prequel, as in it deals with the same universe, same continuity, and some of the same ideas, but does not lead directly into the Alien film. Ridley expanded the ideas that made Alien and transformed them into something larger, more expansive: the search for our creators. It also does not answer that or a great many other questions in the film, which I don’t mind at all. I think sometimes it is a weakness in a film that explains every little thing by the time the credits roll. While I have read that there are ideas in place for a sequel to Prometheus, even if another film does not get made we can watch this and just wonder ourselves what the answers would be.
From a technical standpoint, the film is almost flawless. There are some breathtaking shots of both the alien planetoid the expedition lands on as well as stunningly recorded shots of Earth landscapes, very much like the gorgeous vistas we saw in Lord of the Rings. Most of the acting is top notch, though there some characters who don’t really have much to do. The first hour moves a little slowly for some but I remember when a lot of movies took their time to get to the action, and I was never bored. And it is not a copy of Alien at all; when the action does pick up, it explores some new areas for the franchise (even if not for sci-fi movies in general) and even has a scene that almost matches the original ‘chest burster’ scene in its cringe-worthiness! In a way, Ridley Scott does what he did originally with Alien, took a plot and sequence of events not entirely new in the genre but made them with real quality, tension, and vision that many directors before him could never achieve.
The characters of the film are pretty good overall, although there are a few too many nameless future-corpses for my taste. The characters are well conceived overall, but only two of the cast getto develop as characters. I definitely appreciate that there are very few scenes in the film that aren’t necessary for one reason or another; go to the restroom and you will miss something important.

There are some things I didn’t like about Prometheus, though, and this saddened me because I wanted so much to just love this movie. The biggest problem I see is that some things just didn’t make sense or I knew that what was happening really couldn’t without something else being added. Without going into details, there is a person who has a surgery with the incision stapled up during the movie, but then the person gets no real rest, ends up running all over the place, exerting his/herself and even climbing at one point, and the whole time I’m wondering how those staples were holding. I’ve known several persons who accidentally reopened an incision just by stretching to reach something. I also have an issue with the reactions to death in the movie. No spoiler here, if you watched the trailers to know someone dies. Problem is, the whole movie lasts over a very short period of time, but in each case where someone has perished violently, the rest of the crew seem perfectly fine by the next scene with only one real exception (one of the main characters, of course). Everyone else is like, “Back to work, nothing to see here”. Another specific point is that the ship sensors, which are pretty nifty and seem to notice a lot of what is going on, suddenly do not notice two pretty big things toward the end; I guess they are programmed for building tension (“Dave, according to my studies on American filmmaking, this is the most dramatic time to tell you we’ve been losing oxygen out into space for two days and you have about an hour left to live!”). Some of the characters jump to a conclusion really quickly when there isn’t enough evidence (old school Batman right there!), but I’m hoping that is part of Ridley’s plan and that some of these quick assumptions turn out to be wrong if there is a sequel). I went into the film looking to give it a glowing review, but too many things drew me out of my enjoyment with a ‘WTF’ reaction.

Overall, it is a visually stunning movie and, if you don’t look too deeply for errors, you should have a pretty fun ride. Despite the things that distracted me, I still enjoyed watching Prometheus immensely. Simply put, with its flaws it is still better than most sci-fi movies. Ridley still makes many of his scenes look dark and dismal and makes you almost feel the dust in the air and the grit in your teeth. His worlds are rarely pretty, but you feel them, and that is a fantastic feat. So while I did not love the film, I liked Prometheus a lot. It pushed some of the right buttons, made me cringe at least once, and had me mesmerized for long stretches of time. As long as you don’t have your expectation set so high that the film cannot reach them, and if you aren’t there ready to pick out every error, most people, even folks not as much into Science Fiction, should find something to like about Prometheus. I give the movie 4 out of 5 stars and really hope it makes enough money to continue the adventure.