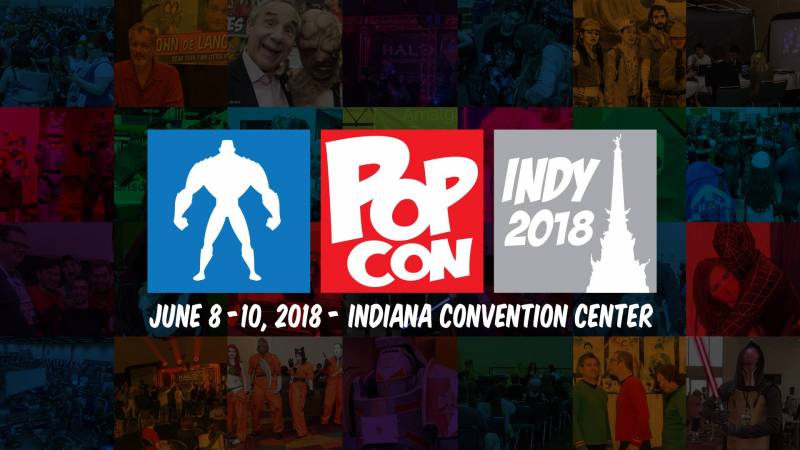 Indy Pop Con celebrated their 5th anniversary this year at Indy Pop Con 2018 from June 8th-10th and this year they went all out providing a lot of guests, panels and a very fun experience as expected. Pop Con has always been my favorite convention, however, it is my job as a journalist to provide what I like to call my semi-unbiased and yet fair review and to make sure I let you guys know the good and the bad that I experienced at this year’s Indy Pop Con.

With Indy Pop Con having it’s fifth convention in Downtown Indianapolis again at the Indiana Convention Center, I expected there to be a lot of festivities celebrating their fifth as well as the success that the organizers have had throughout the past five years. I have noticed each year that they have tried their best to step up and build year after year. However, I will say that I was pretty disappointed with the lack of celebration regarding the show’s fifth year and if there was a lot of it going on I must of missed it or it wasn’t very well marketed. The guest line-up consisted of Star Trek actors Wil Wheaton and LeVar Burton as well as Pom Klementieff, “Mantis” from Avengers and Kristian Nairn & Isaac Hempstead Wright from Game of Thrones just to name a few. While IPC did have the star power they need the other guests didn’t seem to be big enough to get as much attention which was rather unfortunate. Tara Reid from Sharknado was there and she didn’t really seem all that excited to be there and in fact didn’t seem in my opinion very thrilled to be talking with fans, however, this is not at all the fault of Pop Con and I’m sure they won’t be making that mistake again. The other YouTube guests seemed pretty unheard of to me except for Ethan Nestor, better known by his YouTube Channel “CrankGameplays” but that was pretty much it for as far as people that I had heard of in the YouTube community. I am hoping we get more big name YouTubers next year such as Ethan Kline, Angry Joe and maybe even Philip DeFranco would be great to see and might be an even bigger draw for the attendees.

Every year, Pop Con has a panel on Sunday afternoon, to give attendees the opportunity to discuss their thoughts on the event and provide the organizers some feedback. I will say that I do wish more attendees would use this opportunity to come and provide feedback instead of venting their frustrations on the Pop Con Facebook page as this gives those that need to a chance to do so with the show organizers themselves such as the President of Pop Con LLC, Carl Doninger. During this panel a few things were brought up such as the lack of filmmakers being present or any independent actors being present to provide panels or discussion on the movie industry which at an event that features everything in the Pop Culture industry, fans would like to see some panels discussing film much like how Ari Shankar attended last year providing a premier of the new Netflix Castlevania show. Another opportunity for improvement heavily discussed by the fans was the treatment of this year’s cosplay contest. A majority of the discussion on IPC Facebook page was how displeased a lot of people were about the way the judging was handled from people feeling rushed in the pre-judging aspect to flat our feeling as if the time they took to create their cosplay and design was ignored. Most felt as if they did not have the time to explain to the judges the amount of work and dedication that was put into their cosplay and felt as if their time did not pay off. However, Carl did say that they acknowledge how misguided the contest was and lack of proper judging and that this would be much better handled starting next year.

Which leads me to my next point. One thing I truly love about Indy Pop Con is how accessible those that are in charge of planning the event happen to be. I’ve attended a ton of conventions and IPC is the one that I feel has such an “Open Door Policy” with their fans more so than any other convention I’ve had the pleasure of attending. They frequently respond to those that have any complaints or feedback on social media as well as at their panel they have each year. I wish more conventions did such a thing because at the end of the day you can’t make money or have a better convention without the support of your fan base and I’ve always felt those that pay money deserve to have their voices be heard. The vendors this year most certainly were not lacking this year. Sure, there were fewer vendors at IPC 2018 then there have been in years past. However, I firmly believe in quality over quantity and it most definitely showed here this year. I found myself actually wanting to discover more of the vendors and take a lot more time checking them out as opposed to previous years and yes, it did look like there wasn’t much to see at first glance of the exhibit hall, but once you took the time to walk around there truly was a lot to see. One thing that was really nice was that although there was a lot of attendees it didn’t feel like it due to having fewer vendors there so there was a lot of space between vendors and you didn’t rub elbows with other attendees like you typically do at a convention of this size.

Indy Pop Con has been known for having after parties during the weekend and this is something I wanted to take some time to discuss. Friday night was open to people of all ages and held at Gate Ten Parking tucked right behind the Lucas Oil Stadium. Now, I will say that as a man in his 30’s such as myself that being at a party with a DJ and serving alcohol while children were present didn’t quite make me feel all that comfortable and I could also notice that in the expression of others around me. While I understand the need to be all inclusive to those of all ages. I also feel that those underage should’ve been given their own party separate from the alcohol. The party on Saturday night was a 21+ party which included a cover charge and felt more like a party than that of the one on Friday night. The site itself has expanded since last year and now has two buildings as part of Gate Ten’s location which provided a lot more space. It will be interesting to see that IPC does next year as I personally would love to see more bands as opposed to DJ’s.

Indy Po Con 2018 wasn’t a disappointment by any means. Sure, they have a lot to learn from and is a work in progress, but still is my favorite convention. I encourage those of you that didn’t attend or maybe even unsure of checking it out to at least go on Saturday which seems to always be the best day at any convention and check it out. You won’t be disappointed especially with their being an app to guide you to panels and also a map showing you the location of where panels are which is something I hope becomes a Pop con norm. I cannot wait again for June 2019 to come around and see what changes are made and if they top themselves this year. By having a staff that listens to their fans and responds to feedback, I’m very confident we will see a much better and more exciting convention than this year.