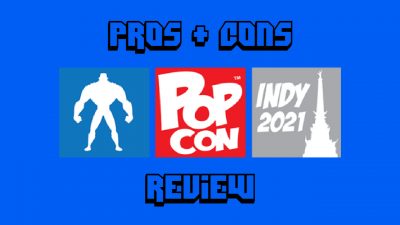 For months on end, convention goers and fans of many different genres of pop culture have been desperately waiting to attend conventions in person once again. For the city of Indianapolis, this wait has finally come to an end. A few weeks ago I had the privilege of attending my 8th PopCon with this being only the 7th in-person event for PopCon Indy. Last year, PopCon faced some challenges with their Virtual PopCon, but with those challenges behind them, they had the task of how exactly to go about bringing back the event in person with there still being a pandemic albeit one that has greatly subsided in the past year.

I had the pleasure of speaking with one of the founders of PopCon, Carl Doninger, on our podcast, The Dragoncast, a few weeks back, and one of those challenges were that they simply weren’t sure about what exactly the Covid restrictions would be as far as working with the city of Indianapolis, the Marion County Health Department and of course, the Indiana Convention Center. It wouldn’t be until close to a week away from the event when PopCon announced that there would be no Covid restrictions save for those that are not vaccinated to wear a mask. Granted, I was fully prepared to include just how PopCon would handle said restrictions, but since this was no longer a concern it isn’t something I will have to mention here.

So, how exactly was the return of the first major in-person event in the city of Indianapolis?

First off, I was rather curious which side of the convention center would be used and for those that attended the convention in its first few year’s you will be familiar with which side is the old and which side is considered the new and for this year’s convention, the side used was the one by the Maryland Street entrance which is what we call the old side.  What I have always noticed about the old side is that it can make any convention look as if it has more attendees than it really does. PopCon doesn’t ever put out their attendance numbers (and they have yet to do so for this year as of this review) but I will say that what I would expect to see when it comes to the number of people for each day was far more than what a usual PopCon attendance would look like. I spoke briefly with PopCon Volunteer Director, Les Eller, on Friday of the convention and he said “We are surprised by just how many people are here today, especially for Friday.” I myself told him I wasn’t all that surprised since everyone has been in their homes for the past year and have been itching to come to a pop culture convention. Many of the other volunteers I spoke with said that they didn’t expect such a high turnout because they weren’t sure if people felt safe about attending a convention yet. 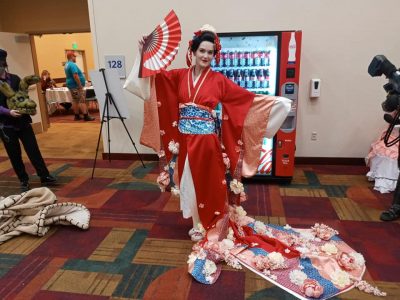 The entire weekend was filled with tons of attendees and lots of cosplay. It felt great seeing so many cosplay and especially from various new fandoms of certain shows and movies, one that struck me and one that I didn’t recognize right away was of Lady Dimitrescu from Resident Evil Village which really got me thinking about just how many people have been waiting for a convention just so they can cosplay a number of new characters from these fandoms from the past year. It was amazing to see just how much hard work many people put into their cosplays and you could even tell that the quality increased significantly due to people being in their homes for over a year. 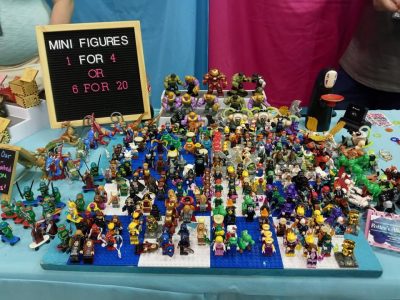 Upon receiving my badge I made my way to the vendor hall, the one place that typically has the most people at any convention and that especially holds true at PopCon. I always look forward to the quality of vendors as well as the layout of the vendor hall itself. Once again, I was curious how this would play out while the Covid restrictions were in place, but that wasn’t the case here as it felt just like any other convention and I loved seeing the smiles on the vendor’s faces as I know that every single vendor I talked with was thrilled to be back doing what they love. PopCon always does a fantastic job of getting as many local artists and other various vendors at their convention and this year was no different. The layout was, in my opinion, the best layout they have had. From the back wall of the vendor hall going to the right wrapping around the vendors in an L-shape was where you would find the numerous guests from Arthur Clark & Rob Wiethoff (Red Dead Redemption 1 & 2) to many other voice actors such as Jim Cummings (Winnie the Pooh), Billy West (Doug, Ren & Stimpy) and also actors such as  Holly Marie Combs (The Mandalorian). There was plenty of great variety in the vendors and the vendor hall itself had a great flow to it. My only hope is that the vendor hall expands next year but keeps this same layout with even more vendors and guests. 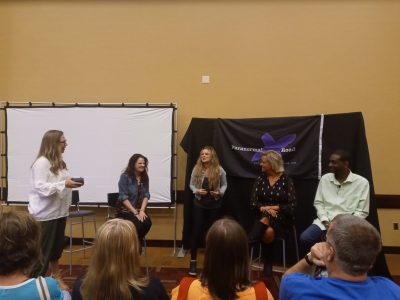 The panels were plentiful as there was everything from “Convention Horror Stories” a personal favorite, to even a panel with the voice actors behind the Red Dead Redemption series. One thing that was lacking here is that there wasn’t enough in the way of events. I always go back to 2016 which I firmly believe had been PopCon’s best year yet next to 2015 in which major YouTube sensation, Markiplier was at the convention. While PopCon did have their Internation Film Festival I will say that this event was the only major event happening at PopCon. I remember several years back when PopCon had events such as attending a showing of “Flash Gordon” back in 2015 at the historic Artcraft Theater in Franklin, Indiana, or even a pro-wrestling show which was held at PopCon back in 2016. I have always said that I wish PopCon held more events during their convention but there was one event outside of the norms like the newly branded “Ultimate Cosplay Championship” This new, ticketed event, was in the form of a live episode of the new paranormal show called “Paranormal X Road” (that’s cross road for those unaware) featuring Kitsie Duncan, a very well known paranormal investigator, KJ McGlinn a former local radio personality and also one that is in tune with her spirituality, and also spirit medium Tiffany Rice. 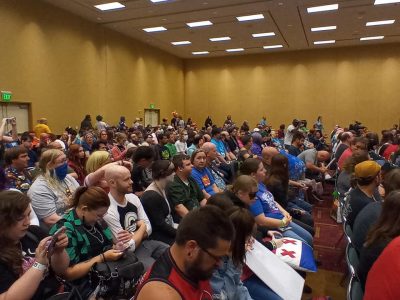 The show was very interesting as I myself don’t watch a lot of these types of shows myself but have been quite curious about the paranormal. This live recording was two whole episodes as the audience was able to meet two different families, one of which was KJ’s very own sister, and see just how KJ and Kitsie investigate. This was quite a nice addition to a pop culture convention and one that I hope to see again in the future. The only other major event that happened during PopCon was of course Twisted Toonz. Twisted Toonz has become, in my opinion, a staple now at PopCon and the one thing that I always look the most forward to every time I attend. The premise for Twisted Toonz is quite simple, bring together some very well-known voice actors and have them read the script of a very well-known movie (in this case was Willy Wonka & the Chocolate Factory) and have them play various roles from the movie and voice them as the characters you know and love. So hearing Jim Cummings play as Grandpa Joe voiced by Winnie the Pooh is something you probably won’t get to see anywhere else. I highly recommend making Twisted Toonz a must-see for those that ever plan on going to a PopCon as I promise you won’t be disappointed.

As far as my complaints would be for this year’s PopCon Indy I would have to say that as a podcaster, I would hope that the Podcast Awards gets some more love, and attending it didn’t seem all too eventful. Another issue would be that of making sure PopCon makes certain that everything going on during the convention is on their site as this was a problem for the Podcast Awards as it was not even listed on the schedule and many of us were very confused as to what time or where the awards show would be at. I also hope that the vendors’ hall will be more expansive than this year, but I can let that slide considering PopCon wasn’t all that sure on what to expect in July during a convention so I am certain planning was still a bit hard to do.

Last, but certainly not least is the issue of someone dressed up as a Nazi was somehow able to make their way into the convention. Now, I could be like most I have seen and give PopCon a lot of gruff about how someone could enter a convention dressed that way, but the real focus should not so much be on the convention, but more so on the person that chooses to dress as a Nazi. There are several ways this could’ve happened. For starters, there are restrooms inside of the vendor’s hall which make it rather easy for someone to come in badged with a backpack, go to the restroom, and change into said outfit. Now, I have always wondered why conventions don’t do bag checks at the very least when entering the vendor’s hall and I get there are quite a lot of people coming in and out but I feel it is something that needs to be addressed. Also, why no walkie-talkies? I have been to other cons in years past that have made sure that, at the very least, the actual staff is equipped with them, but PopCon does not have them. This would vastly improve on communication as well as if someone saw something. 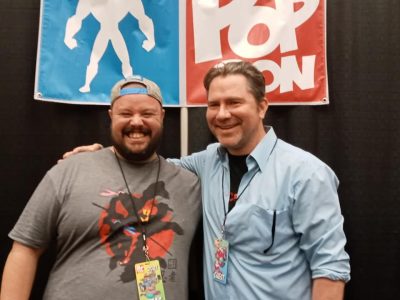 This leads me to another point convention goers, I saw tons of people posting the photos of this person dressed this way, but how many people actually reported this person to staff? There was one person that said they did and they were ignored by a volunteer, while I cannot confirm that to be true, we as a convention community should always have the mindset of “see something say something” much like the cosplay is not consent rule we have to be aware of anything or anyone that tries to cause dissent in the community. While PopCon does share some of the responsibility for who enters their convention, you cannot blame them for another’s actions.

All-in-all I will say this has been the best PopCon in several years and I would absolutely recommend those looking for a great, local convention to come check PopCon out next year. They always care about their community and are very easy to talk to about any issues you may have with them especially when they are the only convention I have ever attended so far that has a panel dedicated to telling them exactly how you felt about the convention just before it ends. Unlike some conventions I have attended where you can tell the most important aspect is making money, PopCon may be a business, but it doesn’t seem like it in the way in which they care so much about trying to make the convention better and better each year as well as making sure to do right by their attendees.