Larkspur, Calif. (June 17, 2021) – Developer Kemono Games and publisher Ravenscourt are happy to announce ProtoCorgi will release on Aug. 26, 2021 for PC and Nintendo Switch. Fully rested and primed for a furrocious battle to save his creator Nixie, ProtoCorgi’s starring cybernetic pup Bullet is now ready to head out and defeat every villain that stands between him and his goal.

Watch today’s new story trailer on YouTube to learn how Bullet came to life and also how Nixie disappeared:

If you want to take the cute-yet-deadly cybernetic corgi out for an early enemy-blasting lap around the galaxy, you can do so in a new demo available as part of Steam Next Fest.

In addition to the latest gameplay, the demo also includes a first-look at ProtoCorgi’s level editor, allowing you to create custom adventures for Bullet. The level editor has many fun features, including the ability to choose between horizontal or vertically scrolling levels, your favorite in-game tunes, and more. The level editor offers different backgrounds and access to all kinds of obstacles as well as enemies to teach Bullet a few new tricks with your creations. 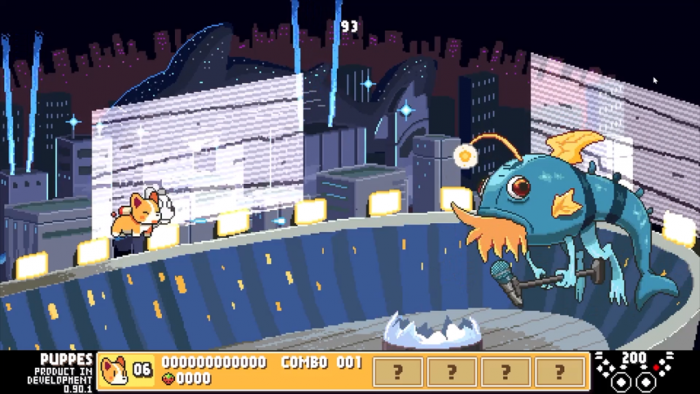 When Bullet discovers his creator Nixie was kidnapped by evil alien forces seeking galactic domination, the cute yet deadly Corgi emBARKs on a quest to save her. The adventure ahead fills your screen with fully animated beautiful retro pixel art and lets you experience Bullet’s fights with precise controls, solid gameplay, and a passionate story. Shoot, dodge, and bark your way through in this adorable bark-em-up.

We are an indie development studio based in Rancagua, Chile. We are inspired by the old arcade games, but not afraid to clash as many pixels as necessary to breed a new generation of games with new and exciting mechanics.

Established in 2014 – and operating from its Munich headquarters in Germany – Ravenscourt’s mission is delivering amazing games to a broad audience from both established studios and industry newcomers.

With a diverse portfolio, managing the titles of multiple international studios, Ravenscourt games span everything from adventure and management sims through to city builders and indie gems. The label even boasts a good old sing-along karaoke franchise.

Our players delight in engrossing narrative driven adventures, relish the challenge of building new worlds and love solving puzzles. We have more delights in store for them…

The publishing label Ravenscourt stands for worthy interactive entertainment for a broad range of players. It belongs to the Koch Media Group.

The Koch Media Group is a global developer, publisher and distributor of video games, VR games, gaming hardware and merchandise. The group’s publishing activities, marketing and distribution extend throughout Europe, America, Australia and Asia. Koch Media has more than 25 years of experience in the digital media business and has risen to become a leading global publishing partner. The Koch Media Group runs a multi-label strategy with fully owned publishing units such as Deep Silver, Milestone, Vertigo Games and Ravenscourt, publishing games for consoles, PC and VR platforms across all physical and digital channels.

Content Creator/Owner of https://t.co/kw5uyPjwWQ for Tech, Game, Entertainment and streamer at https://t.co/e072uYSy5Y
We reached a new milestone on our YouTube Channel! Thanks to the fans for watching our content and helping us grou… https://t.co/MpzxWGRPxt - 60 mins ago