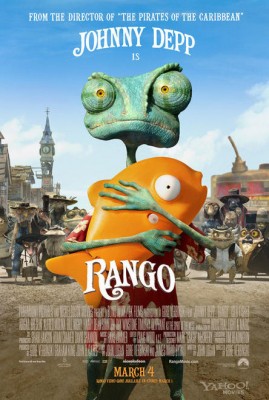 I’ve learned something from watching this film. Deep in the desert of Nevada, there’s a type of lizard that, as a defense mechanism, freezes in place in a trance-like state. Upon awakening, they remain unaware that they’ve “zoned out,” but they will, indeed, remember if you decided to kiss them during said trance, that and Hasbro made fully functional pistols and bullets for their Barbie and G.I. Joe figurines. Along with that, I also learned that a lizard learned to shoot, ride a road-runner, and several other skills quickly.

When I first saw a preview, I had a feeling it wouldn’t be all that good. It felt like something made after the success of Kung-Fu Panda—taking a genre not usually associated with an animated family film and having fun doing so. I had been concerned that it would be a dreary mess of fart jokes, terrible characters and voice acting, large plot holes, and dialogue, not mean to entertain the adults in the theater. I started to see who was involved in the making, both voice actors and creators, and saw more footage, and remained unsure. However, I was curious enough to take my sons without hesitation, and I say with great pride that I was proven wrong. Although I wouldn’t quite put it in the same class as Pixar or Miyazaki films, Rango was still better than a lot of releases meant for children.

Had you not seen the promotions, Rango, voiced by Johnny Depp, is a pet chameleon that falls into the desert as his family goes on vacation. He winds up in the critter-sized town of “Dirt,” which happens to be having a water crisis of extreme proportions. Through some quick-talking and dumb luck, the hero finds himself as the sheriff of this little town. He has a serious mystery to solve, bad guys to bring to justice, and lives to save. All the while, he’s bluffing through the entire thing. There’s a lot more going into play during the film, but I don’t like to give spoilers during a review, unless there’s a point I’m trying to make.

A few things I didn’t find particularly enjoyable, that didn’t stop it from being one of my favorites. The presence of Beans—the female lizard of the town, and Rango’s love interest—was one of them. Should there be a few more reptiles running about, it wouldn’t have been so bad. However, there’s only Beans and some baddies. While the relationship part isn’t ‘Padme and Anakin’ painful, it did seem like it was actually there, because it was simply required. Another thing is there comes a scene where Rango’s will becomes tested and strained, and he’s proven to be a fraud.

The entire thing went too fast, and instead of feeling sad, like I was supposed to, I just felt the “that was easy” type of emotion. There’s also the fact that right at the early scenes of the film, there’s a huge clue that can be followed, but everyone forgets about it, prolonging a grueling investigation.

Although I admit that these issues won’t prove as a problem for other people—certainly not the children—there is a lot I liked about Rango. The biggest aspect I enjoyed was that they didn’t dumb-down any of the characters, or the plot. There are a couple of characters that have serious development, but most of them aren’t, simply put, idiots.It is a Western, so there are tons of shootings, traps, and at least one murder. There are villains with specific motives other than ‘being evil.’ It’s 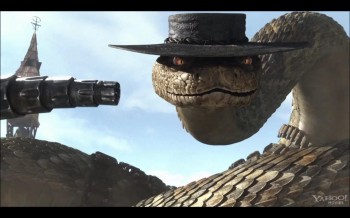 all blood-less and cartoony, but keep in mind that Steven Spielberg altered ET: The Extra-Terrestrial to remove guns from police and government agents’ hands. Here, critters are getting shot at, and shot down, but I’m always glad to see a film that treats the younger crowd as a bunch of idiots who can’t take it.

I also enjoyed the animation. I believe this remains to be Paramount’s attempt in dipping into the bucket that viewers Disney and DreamWorks continue to dominate, but did it with a solid film, over-all. Each animal had a different texture of skin in some scenes, even when there was more than one in the shot. With so many different facial structures and emotions, they still managed to show them well. As I’d expect from those involved, the film had a quirky and great sense of humor, and I found myself wondering just how many lines Depp ad-libbed along the way—making sure the movie didn’t go in a fully predictable way. More than once, when I felt as if I knew what was coming next, the story suddenly shifted in a new direction. Any movie that can pull this off without cheating—or throwing things in that don’t fit or ruin the scene—gets extra points for me.

I can’t say the movie is perfect, but a lot of things did go just right by not doing what so many other films do. They didn’t follow a family film formula—they followed a Western one, and although there were many Western clichés in the plot, and only fans of the older, Clint Eastwood films, would definitely recognize them. Most viewers seeing said clichés for the first time and enjoying the twists and turns that the story takes.

As a final statement, I enjoyed watching the movie. I felt blessed to have been able to see so many quality-rich animated films come out in the last few years. With all of the “Buddies,” “Chihuahua,” “Primate,” and other family films that follow the kid movie formula with little to no creativity. It’s fantastic to see things like Rango appearing on a regular basis. I just hope that it continues. Even if you don’t like animation, this one is just different enough that it may surprise you!