Although only a small percentage of people are aware, Gorillas are being endangered by the lack of recycling schemes for e-waste. Congo is home to over 10, 000 inhabitant gorillas and their existence is being endangered for manufacturing cellphones and other electronic gadgets.

How Is This Possible?

Columbite tantalite, sometimes known as coltan, is a major material used in the making of cell phones. In addition, it is a natural resource found in Congo. Cellphones and many other electrical gadgets are made with it.

You may be wondering how this endangers the Gorillas. In 2009 alone, 300 Gorillas were killed in Southern DRC because of the coltan mining activities in the area. Only about 4,000 can be found in zoos all around the world. The eastern lowland Gorillas are below than 5, 000 left in the world and only 24 of them can be found in zoos. Out of them all, the mountain gorilla is the most endangered with a population of 880 left in the world; there is none of them in zoos at all.

That just goes to show how threatened these species have become.

There are over 270 million cell phone users in the United States and most of them change their phones in 18 months or less. There are at least 4.1 billion people in the world who use cell phones. These sensitive numbers are regarded with little or no respect, as shown by the approach of cell phone manufacturers towards recycling of disposed phones and gadgets. Only about 1% of e-waste (electronic waste) is being recycled every year.

There are many companies including industry giants like Samsung and Apple that contribute a great deal to the industry.

How You Can Help

If I were you, in a bid to help, when I want to dispose of my old or used phones, I would rather choose to sell my iphone.

An interesting fact is that a tonne of cell phones can produce up to 300 grams of gold as opposed to the 5 grams you can get from a tonne of gold ore. There are many advantages to recycling e-waste and the most important of all is the preservation and protection of the Gorillas’ lives. 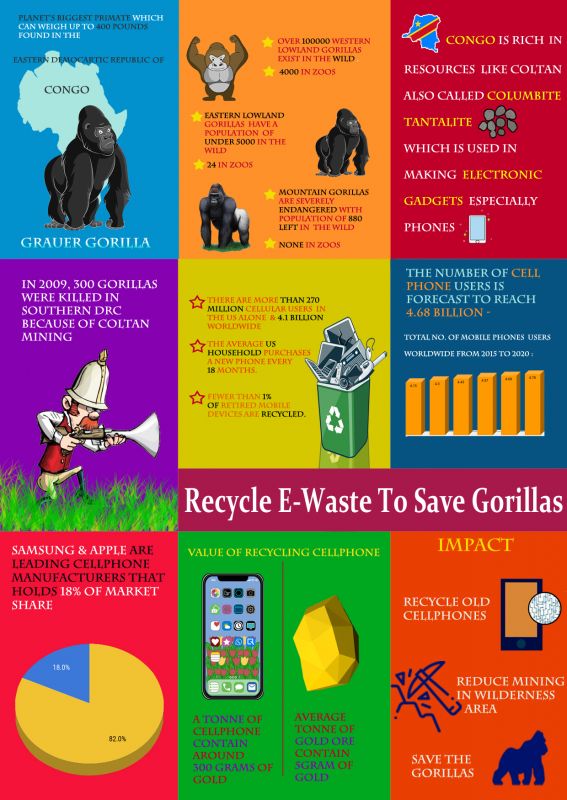