I went to see Resident Evil: Retribution opening tonight and decided to see it in 3D Imax.  Let me just say that there is no other way to see this flick!  The 3D images are even better on an Imax screen because they really pop out at you.  Before I digress too much, and gush on and on about the imagery, let me say this is the only spoiler alert you will get.  If you don’t want to know, stop reading now.

This film starts with a backwards rendition of the boat fight, hinted at the end of Afterlife, while the credits roll.  Once Alice gives her synopsis, complete with images from the other four films, we get to see this fight in full, forward motion.  I actually almost ducked a few times when the bullets started flying.

After seeing Alice float in the water (which with the Imax 3D made it look like the water was above your head) she wakes up married to Carlos with a deaf daughter, Becky.  The morning seems to start normally but then all hell breaks loose and Alice is running with Becky to keep them both alive.  During their flight a very alive, and nice, Rain gives them a ride.  Well as all things go in a Resident Evil film, this getaway doesn’t last, and soon Alice and Becky are on the run again.  The pair runs into a house and hide but Alice must fight to save Becky.  She kills one zombie but then zombie Carlos kills her, and wakes up in an Umbrella facility. 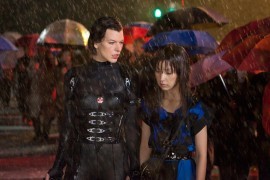 Here is where the real tale starts.  Jill Valentine tries to interrogate Alice, but to no avail.  Eventually Alice gets out of the room when the computer shuts down for two minutes but is almost immediately fleeing for her life.  Alice runs into a nighttime downtown of… Tokyo?  As rain comes down, Alice sees people with umbrellas and a lone girl standing in the middle without one.  Who is that girl, patient zero we saw in a previous film.  Of course, confusion sets in but Alice must fight to get away and the zombies chase her into a corridor, which is white and long.  She escapes into another room, which turns out to be the main control room for that Umbrella facility. 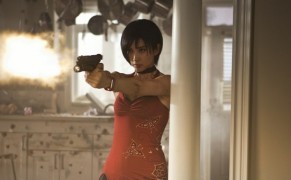 Now we find out where Alice really is as Ada Wong, who is her escape help, along with Wesker (who has miraculously survived) who jammed the computer.  This Umbrella facility is the main one.  It is under the sea and contains several city areas, which Umbrella used to sell the T-virus to the US, Moscow, Tokyo, and China, which is how it really was able to infect the world.  Ada was interesting but there were several things that made me lose my immersion into this survival tale.  Whenever she spoke, I felt like it was a bad dub-over from a foreign film.  She also kept her gun in a holster on her leg, which her dress slit up to, and always pushed that leg out.  While that may be so she could get the gun easier, it just seemed forced most of the time.  Alice learns they must get through New York and make it to the Suburbia section to rendezvous with the rescue team, which consists of Luther West, Leon S Kennedy, and Barry Burton.  Both areas bring their own problems but Suburbia is the worst since here Becky reappears, thinking Alice is her mother, and Jill along with bad versions of Carlos, Rain, and One (the leader from the original Resident Evil) try to capture the women.

The firefight here was awesome with bullets flying out of the screen and glass shattering all over the place.  However, this is another area where Ada’s character made me get out of the movie for a moment when she has this harpoon gun that pulls one of the bad guys toward her so she can kill him.  Where did she get this from as her dress is tight enough you can tell she didn’t have anything else on her and she wasn’t wearing a belt to keep any extra weapons.

Alice and Ada are split up, with Becky going with Alice.  Ada gives Alice some glasses to help her find a way out should she need it and then Alice runs into an alive Rain from the simulation earlier.  Alice ends up saving the guys, who are in the Moscow area of the facility, and then they all use the glasses to find a way out.  Unfortunately by this time the Red Queen (yup she’s back and is a homicidal as ever) has managed to take control again and attempts to force the team to give up, with some insurance, Ada.  Becky gets taken by one of the crawling, mutated biohazards (as they call them this time around) and Alice goes after them while the guys fight off Jill and the rest of the gang.  Once Alice saves Becky, they find a room which shows the people used in the simulations on a rotating rack.  There is several of each person, and here Becky realizes that Alice is not her mother as she thought before.

The only ones to make it out are Becky, Alice, Leon, and Luther, as bombs the guys set detonate and flood the entire facility.  Across the frozen water they go, to meet up with another rescue team.  However, Jill and Rain show up with Ada, and Rain injects herself with some form of the T-Virus so she can’t die.  Jill and Alice fight while Rain takes on Luther and Leon, killing Luther in the process.  During the course of the fight, Alice manages to get the Scarab off Jill and together they get rid of Rain by shooting the ice below her so the undead take her down. 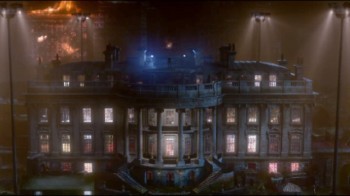 At this point, the rescue copter arrives and takes the five survivors back to the home base.  Here Alice meets with Wesker, who injects her with the T-Virus once more because he tells her he needs her to be at her strongest to face the worst yet.  They are now united against a common enemy, the hordes of infected that are attempting to gain access to the White House; where the last remains of humanity are; and kill them all because the Red Queen wants there to be no life left.  The screen pans out and you see thousands upon thousands of undead of all forms that have been in the last four films.  There are also ones which can fly, and that is the last thing you see before the credits roll.

For an action flick it was pretty good.  The fight scenes were what you are used in a Resident Evil movie, some slow motion and some regular, several near misses and a few deaths of lesser characters along with at least one who tears your heart out.  The Imax 3D really made things pop.  Several times it looked like something was coming out of the screen at me, whether it was bullets, water, snow, or a creature.  You also got a very true depth perception with the Imax, which made the film even more interesting.

Besides the above-mentioned problems, I had a few others.  Alice suddenly knowing how to sign with Becky was probably the worst but watching the characters unload their guns without reloading, when they would have been out of ammo at the rate they were shooting, I had to grit my teeth.

For a Resident Evil film, Retribution was on spot.  I do think they need to find a way to end the series though, because again I can see another one being made.  Unfortunately I’m not sure how they could create a new storyline which would work and not just be a big fight with either the deaths of all those left, or some unexplained reason they finally defeated the hordes and the Red Queen.

I say go see this if you are a Resident Evil or an action film fan.  Don’t go for a completely believable plot.  It’s a fun movie to kill ninety-five minutes but if you are expecting a be-all, end-all this isn’t the movie for you.