“You are only quite a little fellow in a wide world, after all.” These words, spoken with such warmth by Gandalf (Ian McKellen) to his burglar, sum up the movie and the trilogy perfectly. For this isn’t quite a movie about Bilbo (Martin Freeman) and his unexpected journey as much as it is just him being a small cog in an extremely large machine. Bilbo is very much a little fellow in this story that is filled with war, deceit and utter chaos. The third and final chapter of this little bedtime story goes out with a classic, albeit familiar, Jackson bang.

The Battle of the Five Armies starts off exactly where The Desolation of Smaug left us off at. Smaug (voiced by Benedict Cumberbatch) has awoken and on his way to Laketown to terrorize and burn to ash. The company stands in horror, on their lonely mountain, as the inhabitants of the small town on the water is being demolished by the dragon. Even though the desolation is rather short, compared to the story in total, it immediately sets the dreary tone for the rest of the film. Gandalf is still clinging to life, imprisoned in Dol Guldur, until some familiar faces comes to the rescue and send the Necromancer (also voiced by Cumberbatch) packing. It’s a very welcomed reminder of what’s to come. I found myself screaming in my head when Saruman (Christopher Lee) proclaims, “leave Sauron to me.” The dwarves who were left behind to watch over Kili (Aidan Turner) have reunited with Thorin (Richard Armitage) and the rest of the company while Tauriel (Evangeline Lilly) and Legolas (Orlando Bloom) set out to investigate rumors of evil brooding at the old stronghold, Gundabad. As Bard (Luke Evans) and the survivors of the destruction of Laketown take refuge in the ruins of Dale, Thranduil (Lee Pace) pays them a visit with clothes and food. They unite as both require something from the newly appointed king-under-the-mountain. Azog and Bolg, with their seemingly limitless armies, draw closer and closer to the mountain without a single man, elf or dwarf aware of such terror.

While the madness ensues outside the walls of Erebor, inside, another madness is brewing. This madness, however, is of the mind. Dragon sickness has taken over Thorin as his search for the Arkenstone has put an intense strain on the company of dwarves and their burglar hobbit. All of these events lead up to an explosive final act that attempts to rival The Return of the King’s final act. Although it is very serviceable, it still can’t help but fall short and stand in the shadow of the original trilogy. This film seems to have payoff after payoff but leaves you forgetting where the build up was in the first place. 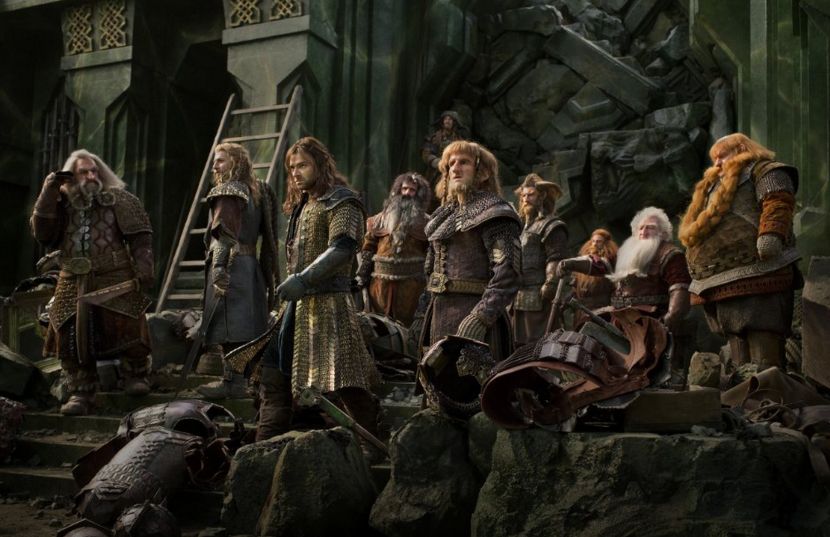 The fantastic acting continues, which is obvious since all three films were shot back to back to back, in the final installment of the The Hobbit and some career performances were given. Martin Freeman steals the show any time Richard Armitage isn’t on the screen with him and his increasing self confidence. This is evident in a scene where he’s talking with Gandalf and tells him he’ll alert Thorin that an ambush is about to be sprung upon him and he is in immediate danger. Gandalf says, “I won’t allow it” and Bilbo responds with “I wasn’t asking.” Looking back at The Unexpected Journey you can really see how Bilbo’s attitude and demeanor has gone from scared and skiddish to brave and unyielding. An even bigger surprise, in my opinion, is how great Richard Armitage was in this one. His ability to portray what a slow decent into madness looks like was right on point. Thorin’s succombing to dragon sickness is frightening and threatens the company as he refuses to give in to Bard or Thranduil’s demands. Even with an army of elves and men outside the front gate, Armitage’s unwavering depiction of a madman who will “not part with a single coin, not one piece” makes Thorin seem even more dangerous than before; like a cat pinned up against a wall. Evangeline Lilly’s heart-felt performance as Tauriel peaks every time her and Aidan Turner’s Kili are together. Their growing love throughout the film is a bright spot in an otherwise dark time. Overall, there wasn’t a single performance where I thought, “it could’ve been better.”

Watching this film in IMAX 3D with 4K resolution was stunning. Peter Jackson never fails to impress when it comes to the visual aspect of his films. From the hauntingly beautiful fortresses of Gundabad and Dol Guldur to the ruins of Dale and desolate Lonely Mountain, the Battle of the Five Armies was breathtaking. New Zealand really has some of the most amazing landscapes our great Earth has to offer and it is on full display here. I was completely immersed in the scenery and, I can’t believe I’m saying this, was rather sad to see The Shire again when everything had run its course

All-in-all, I would say, The Battle of the Five Armies is by far the most entertaining and action packed of the three. It resolved so many issues in such a short amount of time it hardly feels like it had a run time of 144 minutes. Unfortunately, after all was said and done, I was still left wanting more. It had everything you want in a film set in Middle Earth but I can’t help but think “it could’ve been better.” Now don’t get me wrong, I loved it. I have completely and whole-heartedly enjoyed the entire Lord of the Rings/The Hobbit saga but I guess I was expecting more. To be completely honest, these three films felt very much like the first three. The first one in both series sets up the rest of the story. They get everyone together and sets things in motion. They’ve got less action and few thrills but it serves as a vital piece of the plot. The middle films are the centrail piece. They are the heart and soul of each triology. They have the best storyline, a good amount of action and are probably the most thoughtout of the three. Then the third one comes along and has to resolve everthing. Tidy things up and put a lovely little bow on top at the end. They are mayhem and chaos and we love them because the action is constant; the peril is constant. For that reason I would have to say that The Two Towers is my personal favorite of The Lord of the Rings series and that The Desolation of Smaug was my favorite in this series. I give The Hobbit: The Battle of the Five Armies an 8 out of 10. It was fantastic, a visual splendor and it had action pouring out of the walls but it couldn’t top Desolation.

I’d like to hear from you and what you thought about it. Did you feel there was a strong simularity with the two series? Did any actor stand out to you? Which one was your favorite? If you haven’t seen it yet, I highly recommend it. In IMAX if you can afford it, at the very least on a digital screen.

Don’t forget to pick up your copies of these wonderful films.