A new challenger has emerged in the realm of RPGs.  Did it come from just Ken Rolston?  No.  Did it come from just Todd McFarlane?  No.  Did it come from just R.A. Salvatore?  No.  It came from all three of these iconoclasts and a dedicated team of innovators seeking to give gamers a liberating RPG fantasy they never had played before.  Were they successful in this task of gargantuan proportions?  Rather than draw swift conclusions or continue on in lofty hyperbole, I will break down in simple terms the gratifying and not so gratifying experience provided by Kingdoms of Amalur: Reckoning PC Edition.  Feel free to watch the video review below or continue reading.

A Decent Base for a Story

Amalur’s story may not set you ablaze with excitement but it does possess a pretty decent base.  You wake up a living corpse – minus ugly zombie deterioration – and find out that you are a person who is literally fateless.  The madman behind spawning the abomination that you are is none other than the gnome scientist Formorous Hugues.  While you could say the band of characters you meet are pretty much based on the generic RPG stereotypes – the worried doomsayer, a silver-tongued vixen, etc. – its refreshing to play a game that doesn’t totally default to the typical Tolkien formula of elves, dwarves (gnomes in this game), and orcs.

Cutscenes That are Actually Nice to Watch 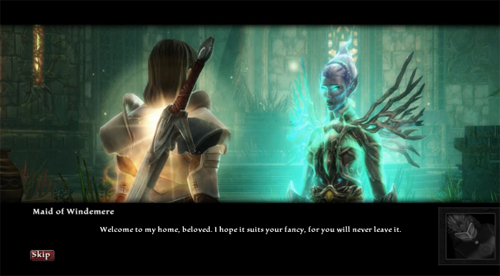 Thankfully, cutscenes in this game are fun to watch in most cases and can easily be skipped at any time if you’re not in the mood to hear all the dialogue.  They give you a chance to take in the gorgeous environments and distinct art style.  The lengths and strides games are taking in graphics sure are impressive but I appreciate Amalur forging its own path and deciding not to follow the hyper-realistic trend.  My only gripe with the graphics would be the fact that several characters appear to have a wide-eyed look in most of the cutscenes.  It gets pretty distracting at times to the point of warranting a chuckle or two.

Taking scenic routes in this game can be quite rewarding but there comes a time when you’ve just passed through a certain area one two many times and want to zip right through it.  If you end up in such a situation then you’ll definitely find a friend in the “fast travel” feature.  All you have to do is visit a location once and in the future it takes a simple click on your game map to teleport you right to that same spot.  It makes questing way easier to power through and I cannot tell you how indispensible it has been to me.

Combat in Amalur is really one of the most enjoyable elements.  Ever hate the fact that you get locked into a certain type of fighter in typical RPGs and reach a point where its utterly impossible to revise your style of attack?  That doesn’t happen in Amalur…ever.  Tired of the longsword?  No problem, switch it up to chakrams or daggers or a staff!  If you don’t have enough points to make you strong enough in the aforementioned weapon talents then simply ring up your neighborhood Fateweaver to give you a hand.  They will clear your slate – for a price – and you can redistribute your experience any way you like.

Skilling Actually Has a Use

Skilling is not just for show in this game.  Each talent serves vital purposes, and depending on how you’re interested in playing, you better invest in them wisely.  For example, beefing up the persuasion skill alone will not make you the master of conversation.  Some points thrown into the dispel skill will serve you better in convincing people to see you eye-to-eye on certain matters.  Hint, hint…the House of Ballads storyline.

After laying out all these positives, I can just sense you eagle-eyed readers out there searching for my first real dig at this game.  Well here’s where the honeymoon ends.  As much as the game displays itself strongly in certain areas – it strikes me as more of the same for the most part.  You got yourself the familiar dialogue wheel, wave after wave of identical enemies, and you guessed it – a world that is bloated with useless sidequests.  I’m really not so keen to spend my time on 50+ quests that do not shape the narrative and give a dinky little trinket to add to my junk pile.

Amalur’s faults do not damage the hours of gameplay.  In fact the old adage of quantity does not equal quality is crushed by this game.  There’s so much packed in that you’ll enjoy – it’ll make you forget that lousy 2 gold coin drop you just received.  I hazard to conclude that Amalur can be merely described as “a success.”  I believe a more befitting description of what Amalur is would be “no strings attached.”  Just as the game promises, you truly are a fateless being that can forge a destiny entirely of your choosing.  It is for that reason that I find this RPG one for the ages.