I recently had the chance to take my wife out on a long overdue date night. We went to the drive in to see a double feature. This first movie up was The Lone Ranger. I am going to spend a few minutes with you and share my thoughts on the film.

I want to start by saying that no matter what anyone else says, you the viewer need to make and form your own opinion when watching a movie. Don’t be so quick to try and compare a remake to an original or an actors performance in one movie with that of another. I used to watch The Lone Ranger as a kid (yes, I’m that old), and remember well the characters from the original show. 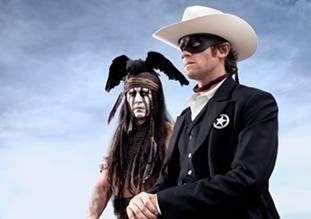 For me, one of the things I like most about Johnny Depp as an actor is that his characters are always very unique. No two films with him in it are the same old actor like so many others are. This movie did not disappoint.

I think the thing that I enjoyed most about Tonto is his humor. He may not look like a funny guy, but he is. Whether he was trying to be or not is up to you to decide, but to me, his character was well developed and fit the story very well.

Now, I know that there were a few other actors in the movie and they were great as well. Armie Hammer was wonderful as The Lone Ranger. The reluctant hero that chose to do what needed to be done when no other choice could have been made. 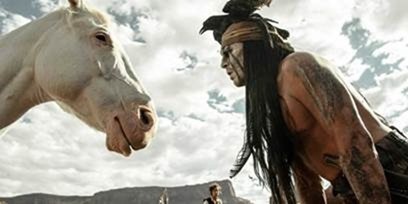 I must also say that my actual favorite character in the movie would have to be the horse. Yes a horse. I don’t know if this horse was real or CGI or what, but this majestic creature was awesome. That’s all I can say about that. If you want more, go see the movie.

I don’t want to spoil anything by giving away any of the story but this movie was full of action, drama, and just plain excitement. The special effects gave this movie the extra touch that will live on in my memory for years to come.

Over all, I have to say that this was one of the best movies I have seen in many long years. I know that my assessment doesn’t match many of the other reviews out there, but that’s ok. I see things through my own eyes, and not the eyes of those borrowing on the opinions of others. If you want to have a great time and want to watch a story that is very different as compared to all of the others, you must go and see The Lone Ranger.