I am an Adventure Time fan and one of my favorite activities is watching Adventure Time with my two boys, we have played a few of the Cartoon Network games for Adventure Time before and actually some of them have been quite good.  I didn’t have high expectations for Adventure Time: Explore the Dungeon Because I DON’T KNOW! but I was looking for something fun to do with the kids and we hadn’t done a Gauntlet style game in a long time.  Unfortunately I was left thinking this game was put together too quickly and intended only to capitalize on the fanbase of Adventure Time without truly delivering a rewarding gaming experience. This review was done on the Xbox 360 version of the game.  I use Gamefly to rent most of my games so I don’t have to buy them for the most part, I do also recommend if you like going through a lot of games per month look t using Gamefly.

First off in Adventure Time: Explore the Dungeon Because I DON’T KNOW! you are introduced to the tutorial by Bubblegum Princess who explains your basic moves, walking, attacking, hitting with your picked up object and blocking.  You get to plan the game as Finn, Jake, Cinnamon Bun or Marceline but can unlock other characters like Lemongrab, Flame Princess and more later.  There is instantly a clear advantage to Marceline and Jake, Marceline can simply fly over pits and Jake can stretch over them, but this forces the other characters to have to walk around pits and when you all have to stay on the screen and can’t split up, it forces the group of players to always walk close to each other without branching out much and can leave one person trapped unable to move until every backtracks to help them around a pit. 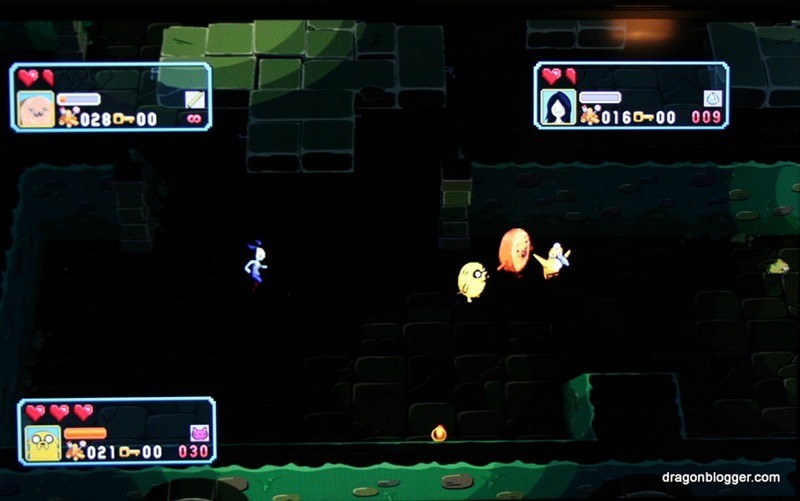 Second there are glitches throughout the game, mostly audio glitches where one of the characters will say something that gets choppy and just repeats for about 10 seconds.  It is like a bad audio recording that gets stuck in a loop, this happens most noticeably if two characters had to speak an action at the same time, such as two characters picking up a treasure.

The graphics are 8-bit style and a little on the less imaginative side, with little variation.  Jake with his infinite stretching could have used more character animations, attack motions, stretch over pit motions and so much more just to add some more visual flare.  The special attacks where you boost up your power meter are also a bit redundant and the lack of variety in power ups and weapons make it to where you say Lady Rainicorn, dropped another worthless Kitten Gun and Egg blaster. 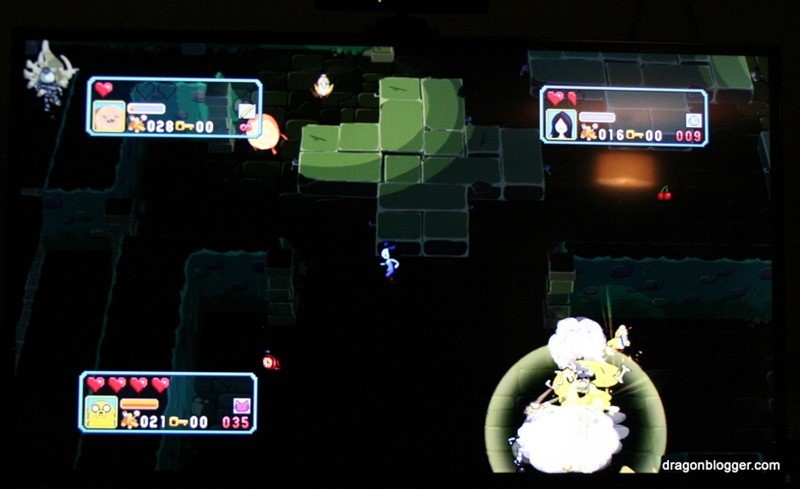 The game adds only one or two new enemies every 5 levels or so and you get a boss at every 10 levels that is very difficult and is the most fun part of the game.  There is little incentive to explore every dungeon level because the few tokens and treasures you find lack so much variety that even my 7 year old just got bored after level 23 and wanted me to send the game back to Gamefly.  My 10 year old got bored of the game after the 7th level and didn’t even make it to the first boss. 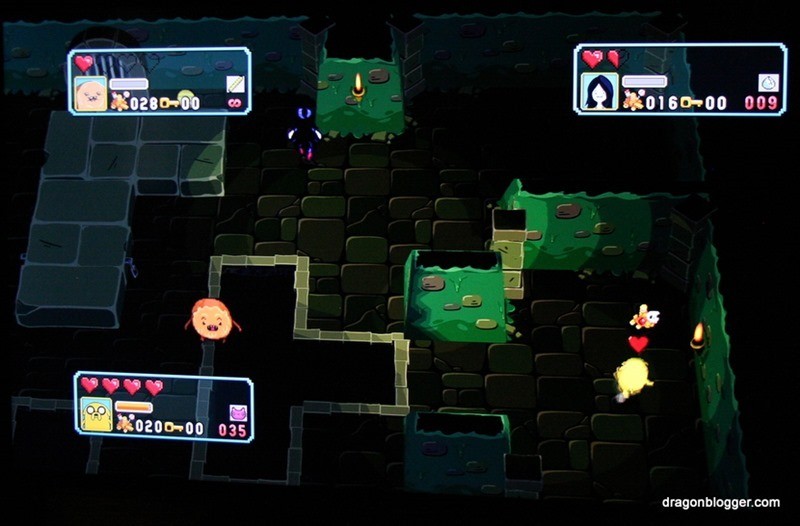 The game needed more variety, not just 1 pick up item, but other weapons, if they would have added a good 20-30 different weapon types, more medal types for powers, and added more variety they could have salvaged it some.  Adding a few other missions for every 10th level or 5th level too could have helped with some variety.  They should have taken a cue from the Dungeon Train episode of Adventure Time realizing the key to making a dungeon crawl game fun is in variations of infinite loot, style, looks, attack options…etc.  If you lack any sort of story and you never really feel like you are powering up other than adding an extra heart bar, boosting your Focus or other attributes so your attacks kill enemies faster and you can survive a few more hits.

I really wanted to like the game, but it doesn’t get my seal of approval, it may entertain very young kids who play in groups but overall Adventure Time: Explore the Dungeon Because I DON’T KNOW! went back to Gamefly within a week.  If you do play I found Marceline to be the best character in the game, the ability to fly over traps and absorb energy long range attacks to boost her meter were more valuable than the slightly increased attack of other characters.

Ironically my kids loved the Finn & Bones game on Cartoon Network much more and it is free http://www.cartoonnetwork.com/games/adventuretime/finn-and-bones/index.html

Buy One Month, Get One FREE!