Lately there are more STEM robotic kits than ever coming up in the market that not only teach kids how to assemble and build but also to program robotics using object oriented programming mostly in it’s most simplistic form in a mobile or desktop app.  Robobloq is one of those companies that markets a robotics kit for various ages, and they sent me their Q-Scout beginner robotics kit which is an excellent entry level robotics kit for kids ages 6+.  What I really like about the kit is that it uses metal components and a screwdriver for assembly, it isn’t all just press and plug Lego block construction so kids have a more hands on feel, using more dexterity and it feels more like building something solid.  Plus it is more sturdy since it is metal plated and can handle bumps, drops or a little impact a bit better.

Now, you can see you get 65 pieces total which include the Micro-Controller (Arduino Uno), an ultrasonic sensor, a line tracking sensor, 1 buzzer, and 2 RGB LED’s.  The Arduino IDE uses C but the mobile or desktop app for Robobloq makes it very simple to drag and drop commands and instructions and create routines and programs for the Q-Scout.  The base of the Robobloq does need 6 AA batteries however which are not included. 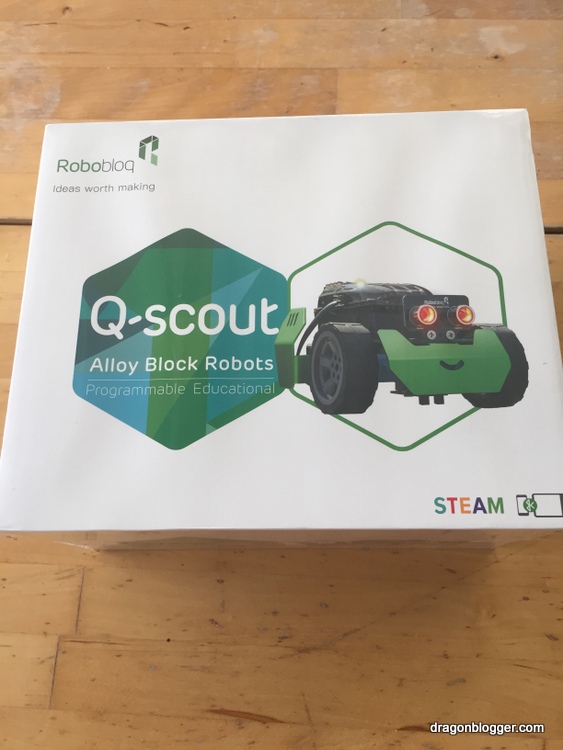 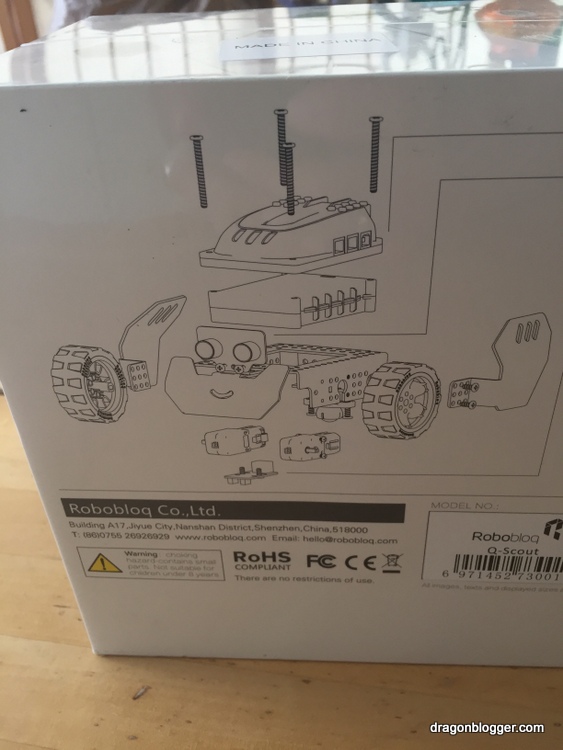 It is highly recommended you have a mobile phone (Android or iPhone) so that you can install the Robobloq app and use the instructions in real time from the Robobloq app to build the robot.  The instruction guide you can download online is very large to print out.  The mobile app also makes it very easy to pair with the Q-Scout when you are completed, compared with having to plug the Q-Scout into a PC via the provided USB cable.

The Robobloq Q-Scout had excellent installation instructions and every part bag was labeled very well, my 11 year old had no issues assembling it and put it all together in less than 40 minutes. 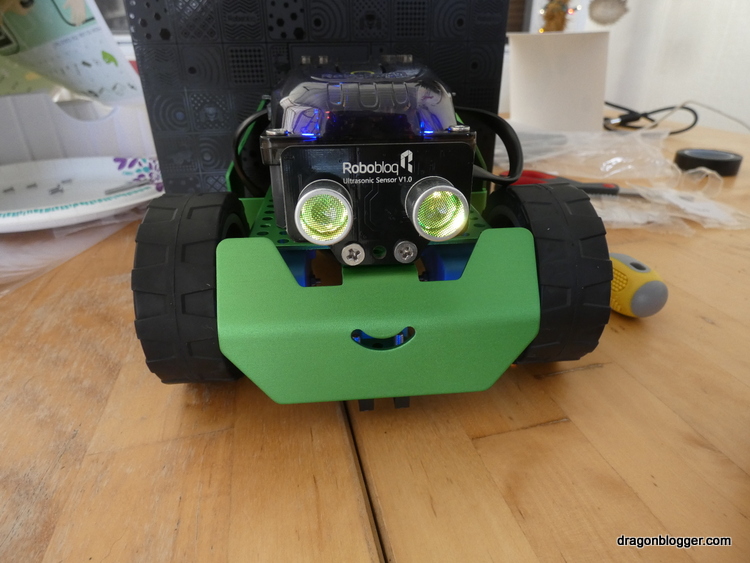 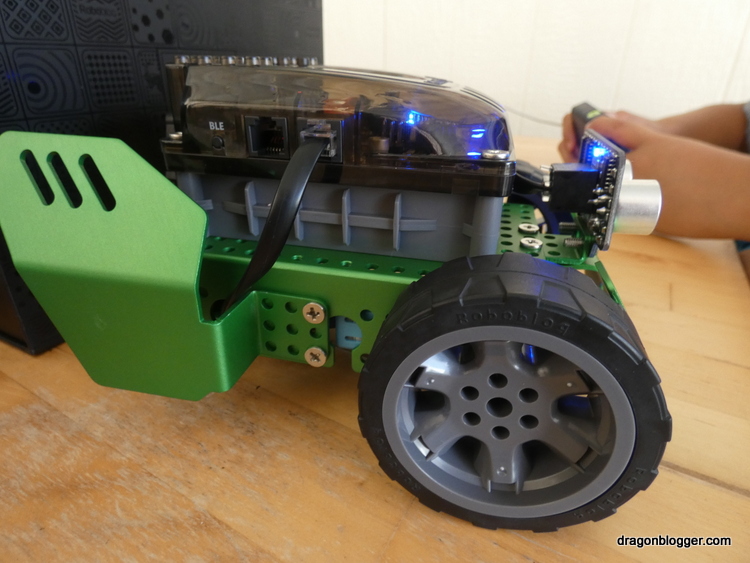 Two things to note when finishing up the Q-Scout build, the first is that the M1 and M2 cables can be hard to snap in all the way but you need to make sure they are snapped in all the way or they will fall out or may not work properly.  The other is it is easier to accidentally have the wrong cable plugged in and if it does you will notice the movements being reversed when you try and control the Q-Scout where up goes backwards…etc.  Very easy fixes, but just know that it took some pushing to get the cables snapped in and you can see that issue in the video while testing the Q-Scout. 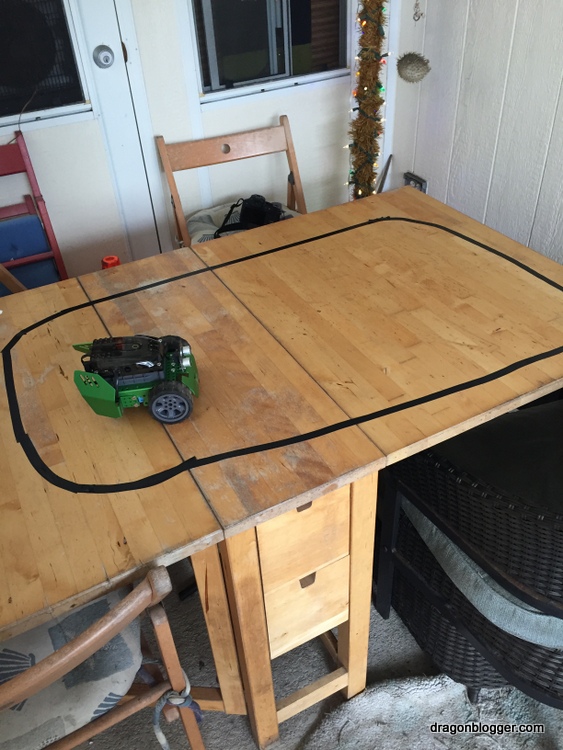 Prior to testing out any customized programming we just used the main functions by default in the Robobloq app which included manual driving controls, playing default songs, object avoidance and line tracking.  Object avoidance worked just fine as did all the music playing and other functions, but where we had some problems in testing was line tracking.  While the Q-Scout was able to track the line at first it was not able to detect the corner fast enough and zipped past it before it attempted to turn. 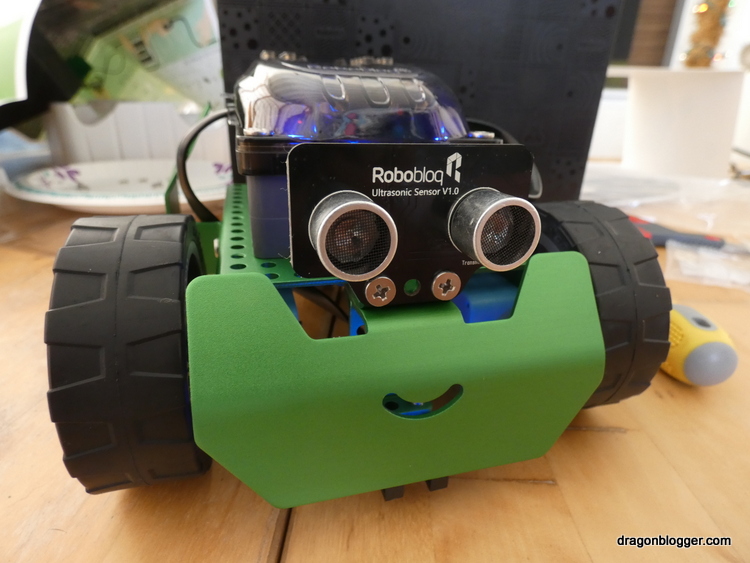 The Q-Scout actually moves very fast while in line tracking mode so I am betting you have to make a very large track, larger than we were able to accomplish with our table surface in order for it to track turns properly.  We updated the Q-Scout firmware from the brand but we still had problems getting line tracking to work accurately but it may just be the limited surface area I had to work with and size of the track being too small, though Robobloq said the size of the track appeared okay when I sent them pictures. 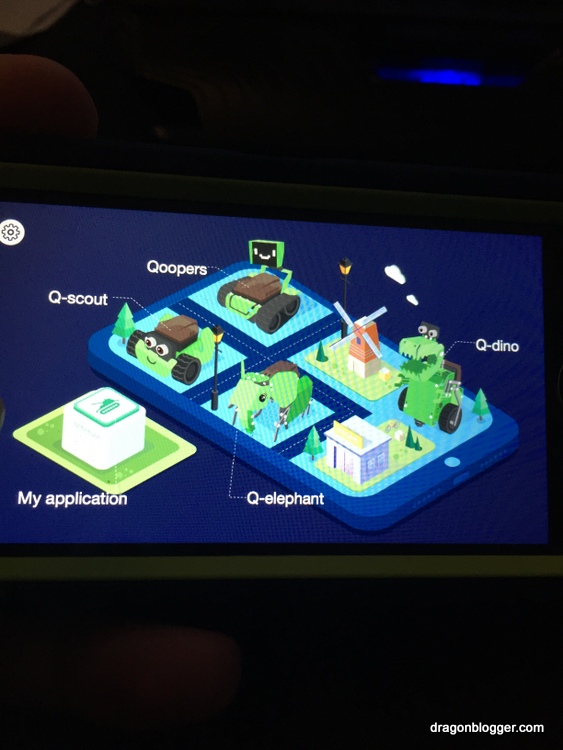 When you log into the Robobloq app you can select your robot directly for controls/default programs or you can click on My Application and start developing your own application for the Q-Scout or any other of the Robobloq robots.  The app gives you all the functions and capabilities of the robot and you simply select the functions you want on the left and build patterns in a visual diagram on the command order that is processed. 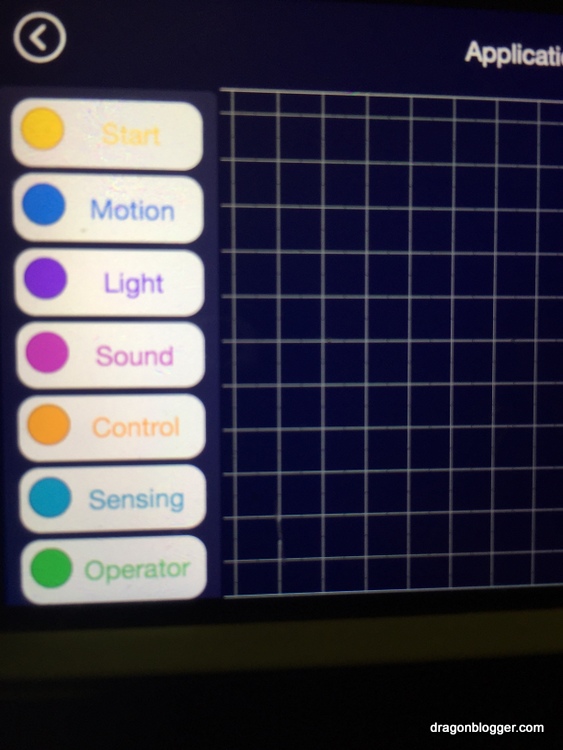 You even have such fine grained control over each note and half step with the music/sound box so that you can play Midi music as accurately as any midi player can. 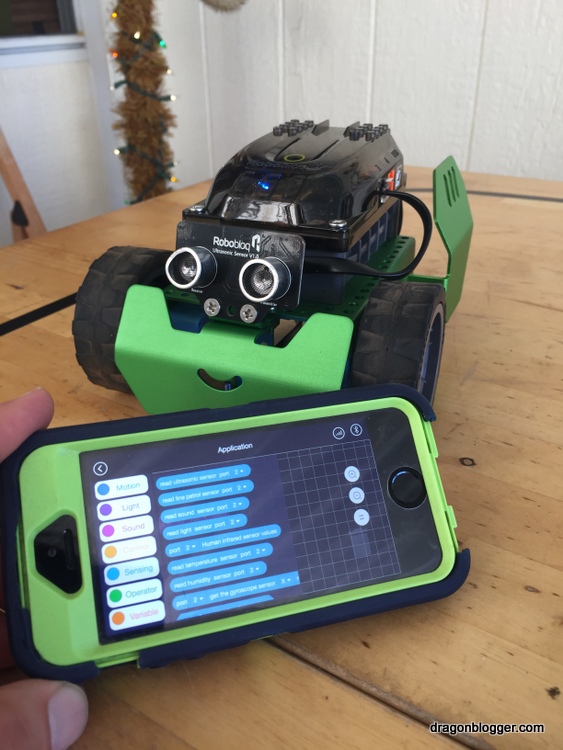 Now Q-Scout doesn’t have as many options for programming as the more advanced robots from Robobloq, but there is still a ton of options that you can chain together.  You simply drag the function from left to right and they connect to each other like a jigsaw when they are chained in sequence.  You also adjust what options and parameters for each function.  I did find it was much faster for me to build programs on the Windows Desktop app for Robobloq than for mobile only because the phone screen is very small and I am just more used to a mouse and keyboard.  As you can imagine if you are playing a song one note at a time it can be very cumbersome to build one note at a time, it would be nice if you could import midi songs and they can be understood and possibly modified for simplicity. 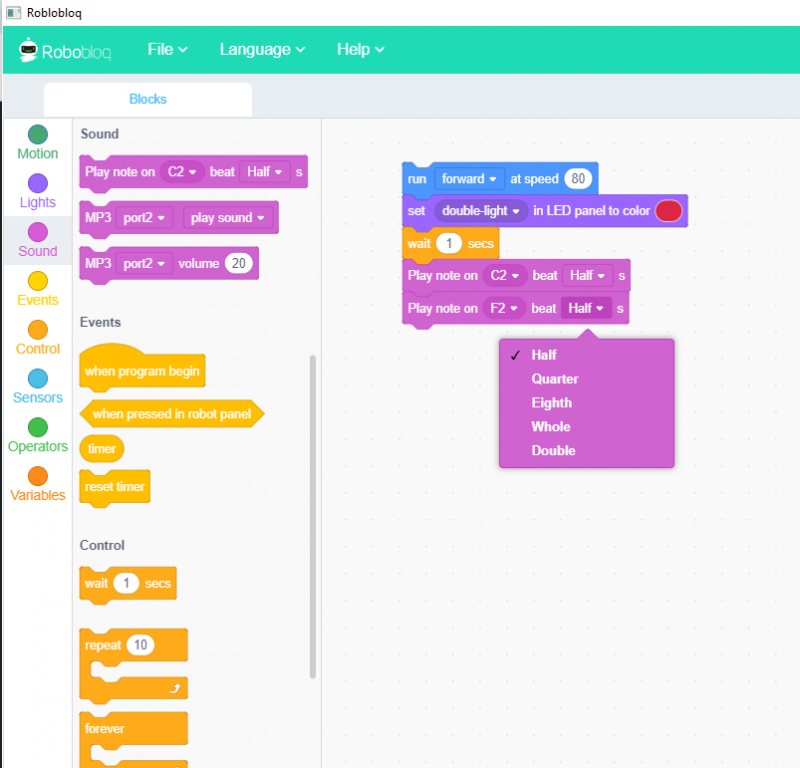 You can get pretty complex though even syncing the lights to blink with sounds, or movement to trigger with notes…etc.  Let your kids explore what complicated programs they can think of and you can save their programs as .bloq files or import/load .bloq files.  Really the sky’s the limit with the provided sensors and functions you have with the Q-Scout and if your child really likes the Q-Scout and gets it down you can upgrade to the more advanced robotics modules later. 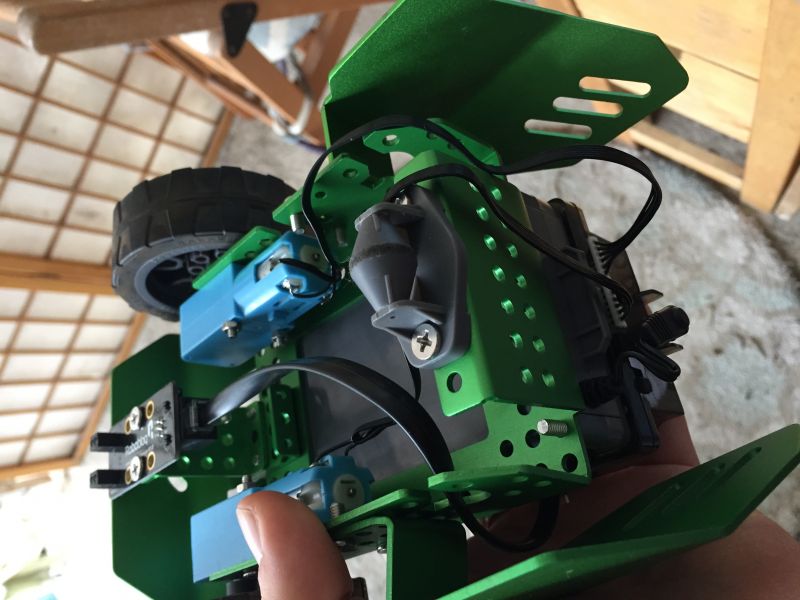 The one thing I didn’t like about the Q-Scout honestly and the one thing I wish they would replace is the poor choice for a 3rd wheel.  Instead of giving you 4 wheels you get 2 normal wheels, but this 3rd is like a plastic barrel or drum wheel that is very small and has no rubber at all.  This rear drum wheel is what prevents the Q-Scout from rolling on thick carpet, dirt, rough concrete or being used in parks and other places, it hampers it’s ability to free roll over any surface and limits you to very flat and relatively texture-less surfaces like hard tile floors or table tops.  It picks up dirt easily and gets stuck quickly.

For making a car like robot, having this 3rd wheel design was just too limiting if you don’t have a large amount of hard floor space in your house, and if you have carpeted rooms your kid is stuck playing with the Q-Scout on floors that have stick tile or tiled/wooden floors.  Since it moves fast, it really isn’t a table surface robot.  Keep this in mind if you are considering the Q-Scout and make sure you have adequate floor space if you are thinking about getting this toy robot for your kid.

Robobloq also has a number of other and more advanced robots, in particular their animal robots look amazing though I haven’t reviewed any of them yet. 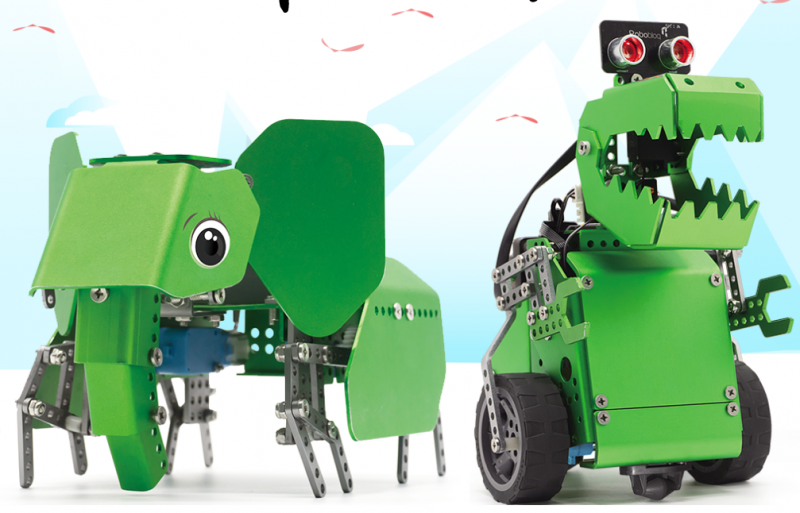 Disclaimer:  I was provided the Q-Scout to review, all opinions are mine and mine alone.