A couple of days back, Samsung announced the Galaxy S3 mini, which is a smaller sibling to its flagship device called the Samsung Galaxy S3. Samsung has yet to confirm the availability of the S3 mini in various markets however reports are suggesting that UK might get it first in a couple of weeks. The most notable features that have been stripped off from the higher end S3 are a slower CPU, smaller display size and lack of 4G LTE network.

But besides that, let’s get to the head to head comparison of these two smartphones. 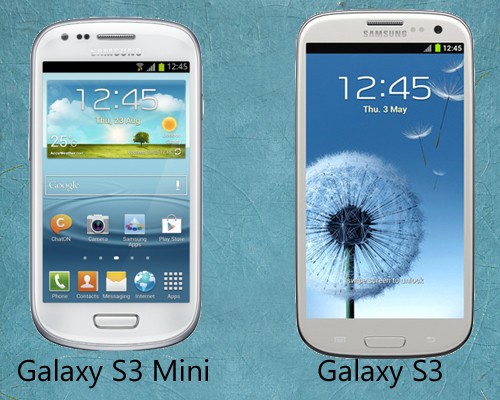 Samsung has replaced the 8MP primary camera of the Galaxy S3 with a 5MP camera in Galaxy S3 Mini. Though the LED flash remains intact, its front facing camera has also been stripped to VGA from the 1.9MP of original Galaxy S3.

Features such as Bluetooth 4.0, NFC, 8GB and 16GB variants are still all intact between both models however. One of the downsides I observed is the 1500 mAh battery power. That’s hardly going to last for one full day (if you use your device with moderate data connectivity). The original Samsung Galaxy S3 has 2100mAh battery, but maybe the smaller screen size and lower resolution will require less power and offset the difference.

Samsung has taken one step ahead of all so far as they have added Android 4.1 jelly bean on board with the Galaxy S3 Mini whereas the original Galaxy S3 has yet to receive Jelly Bean as an update in some markets. Most of the other features are the same as that of the Samsung Galaxy S3 including S-Beam, NFC and S-Voice. The one awesome feature that keeps light on when you glance at the camera is there in Galaxy S3 mini too. If you’ve anything to share with compatible devices like your TV for example, then DLNA would help you do that easily. On the other hands, these (& other) extra features are considered battery consuming and would not be a good fit for 1500 mAh device as was one of my concerns in the previous paragraph.

There are no confident reports on the pricing and which market will first receive the Galaxy S3 mini. I’m very confident that the US won’t receive Galaxy S3 Mini anytime soon as it’s not the best fit for the market. There is a good chance that this smartphone will make its entry in the U.K., Middle East & India or other emerging market and will perform better there than it would in the US.

A young and passionate blogger who loves writing about Android and Geeky Stuff.