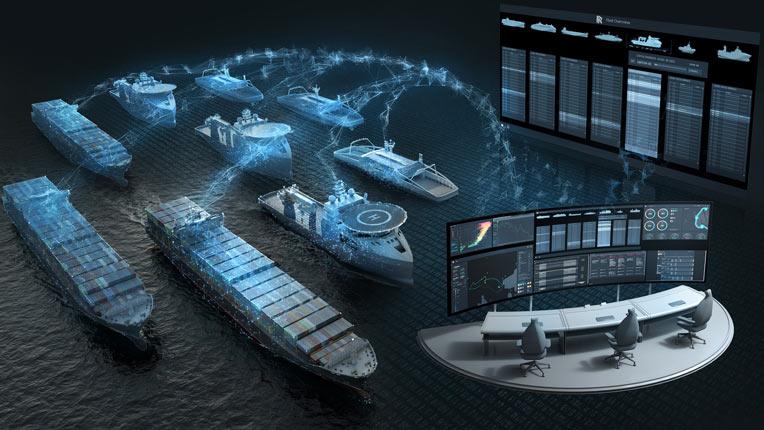 Yes, Technology is the reason!

If you see smart wearables, there’s IoT behind it.

If you hear about emotion-recognition, its deep learning analyzing your neural networks.

So why not thank the ever-growing technology that made the world digital in all respects and will continue to raise everyone’s brows with its surprising innovations, keep on spinning the world on tips.

We have witnessed some significant changes in the technology over land, but how about to experience digitization over marine life too. Rolls-Royce partnering with Intel is all set to revolutionize the marine industry with the ever new technical concept to be applied: Ship Intelligence.

Ship intelligence might be new for some; however, it has already made its advent making a sheer contribution in enhancing vessel performance, operations, user experience, and safety. The world while it’s been groomed by digitization, one must prepare himself to see in a more remote and autonomous world within the coming years.

The expanding bracket of IT advancements isn’t even possible without proper process and workflow management where an ITIL certification and its learnings hold great value in making the IT dreams turn into reality. Intelligent Asset Management and Remote and Autonomous Operations are the two major segments that play a vital role in making self-driving ships to be a great success in the near future.

The world is driven by AI and its subsets where one day they will rule the universe empowering machines to serve humans whenever they want and wherever they exist. The ever-new concept of autonomous ships will be made to use the computer vision of the world with AI spotting, tracking and labeling every water source coming across. (water users, shores, navigation markers, etc.)

No questions can arise on the capabilities of machines as they stay focussed, and determined when it comes to execution and when compared to human accuracy. Without any traces of doubt, modern devices play solo and can beat the human reaction time when programmed right and keeping this in mind the many renowned enterprises take interest in giving a technical breakthrough industry-wide.

So, take a rundown below that which advanced technologies the big company (Rolls Royce) looks upon to make the virtual facts and imagination come true.

Undoubtedly, the new technologies booming today have a sheer dependency on Data which is no less than oxygen. IAM is what that harness the power of data securely with Data Management and Health Management to enhance revenue generation, eliminate risks, improve predictability along with supporting environmental compliance.

Intelligent Asset Management is so implemented that it will deliver accurate real-time measurements using cameras, Lidar, and Radar to the remotely working crew, thus allowing better control of information.

Rolls coming up with this great venture understands that the digital world is blindly dependent on data for which they look upon their Intelligent Analytics Centre that analyzes and processes massive heaps of sensitive data, delivering semantic results.

Rolls Royce is turning no stone unturned in making the best use of Artificial Intelligence and its concepts of automated reasoning and deductive reasoning to support remote and autonomous development.

As data is more prone to human error, it is believed that autonomous ships will be more efficient, robust, cheap as well as safe when given the power of human intelligence empowering them to make critical decisions analogous to humans.

The popular brand is running trials all over the world. Nineteen ferries run on the coast of Norway having embedded auto crossing systems in them within the designated boundaries of test areas. The computer can undock, re-dock and cross between ports, nevertheless, still they need a human onboard.

Additionally, a Japenese ferry also runs on trial in Kobe during the night to gather thermal camera night vision images of the surroundings to get better insights on the changes and workings happening over the sea.

“ Intelligent Awareness System by Rolls-Royce accumulates data from multiple devices to alert the crew about nearby objects and obstacles.”

The power of IA systems will be witnessed in the self-driving oceangoing ships where they will adequately fulfill the motive for which they are built. The system is so designed that is capable of mitigating risk against navigation, especially while operating vessels at night considering major critical issues like worse weather conditions, docking/undocking circumstances, congested waterways and much more.

Rolls Royce has partnered with Intel where the networked data generated (up to 1 terabyte per day) will be processed by Intel Xeon Chips. The Royce-Intel partnership is predicted to be a success, looking at the efforts and attempts by these overlords, thus, using the latest digital technologies and data managing software and tools.

The timeline set to see first uncrewed ocean-going vessels is 2025, where Rolls Royce want to serve the world with a bigger vision, augmenting the digital revolutions. The time is not that far when people will not be occupied by work but by machines making their life so smooth and comfortable.

Autonomous ships would be a great discovery which when implemented in real will certainly revolutionize the sea world, giving new horizons to the marine industry. Yes, there might be some challenges to face in the initial days, but the modern techniques have enough potential to make machines learn, apply and repeat.