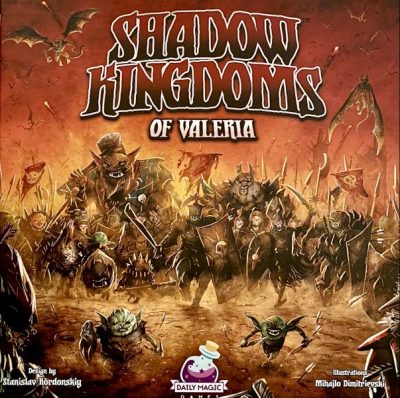 – The main mechanism of the game is Worker Placement. However, it’s slightly different that the player has only one worker in the whole game. Players will take this worker to different areas to perform actions.
– When performing the action, the player will have to take the dice in that area. There are different types of dice, and each type of dice represents a certain type of soldier.
– The higher the value of the dice, the more beneficial it is to perform later Battle Plans. However, the lower the value of the dice, the lower the price for players when buying items. For example, dice 2 will reduce 4 money; while the dice 5 reduce the cost of 1 money.
– One of the most important actions of the game is to get the Achievement card. There are 3 achievements for players to claim victory points. To complete the mission, the player needs to have all kinds of troops (the right type of dice). The stronger the dice, the more points the player will get. In addition, when performing Battle Plans, players will be able to upgrade their playing board. Upgrades will make the player’s actions stronger, or provide the player with more new features. Not only that, players also get bonuses from their own tactical area. The more bonuses, the more likely it is to create a chain of bonuses on the strategy board.
– When the playing area drops the dice to a certain number, all dice are thrown away. Players will draw a new number of dice into each area. And the game goes on.
– The game will trigger an end condition when one of the players completes 7 missions. The players then add up the points and whoever has the most points is the winner. 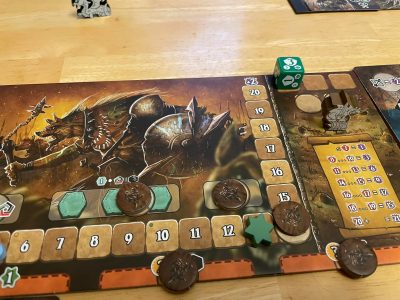 – A rather interesting euro game with a combination of a lot of basic mechanics but new systems. Using a worker that walks around to trigger an action, while simple, is very effective. Players are no longer distracted by action points, or limited in the number of actions, but instead do actions that are most beneficial to the player.
– I really like how Stan Kordonskiy reused the hiring system in Valeria Card Kingdom in here. The more people you hire of the same type, the more expensive it will be. While this system is not new, it is very suitable for games in the Valeria series. It creates a reasonable barrier to prevent players from hiring one type of hero too much.
– How to use and activate the dice in the game is also quite attractive. Players will decide between choosing a high or low value dice, as well as which type of dice. Low dice will help save money but weak power on quests. And vice versa for high dice.
– The tactical area is like a small puzzle. Players do not simply take any reward, but also choose the reward to create a premise to create a chain of rewards for the following rewards.

– I like and dislike the way the dice are tied to the action. The player must choose the right dice according to the requirements of the task. Unfortunately, at the beginning of the game, the number of dice is limited as well as the number of missions. This means that the player must take the dice that are really necessary. In addition, if the player is lucky, the player can get the dice in the area they need to act on. If not, then the player must take the dice in a certain area
– On the other hand, I like this. I like the feeling of solving the more important puzzle dice or the more important action. Sometimes taking a strong dice to easily do a task or do an action you really need and take away the dice that other people need.

– The way players approach the game 75% is the same. Players will always upgrade to get Wild soldiers. This creates an opportunity for players to be less dependent on the dice they take. That’s why this Wild upgrade is too strong to ignore.
– When playing with 4 people, the game is accidentally a bit long. The player does an action, and waits for nearly 3 more turns before coming back. Not only that, if in those 3 turns, a player does the task, the waiting time is even longer.

– Shadow kingdoms of Valeria is a game that is very accessible to new players or those who do not often play board games. The rules of the game are not too picky or complicated. Not to mention there are many examples in the law book.
– Compared to dice hospital, I like Shadow kingdoms more, especially in the quest solving system. I think Stan Kordonskyi has done a great job of creating a worker placement game with lots of little puzzles and challenges throughout the game.
– The game will not be for hardcore gamers. The time to play this game is not worth the investment for such capacitors. Although there are many small sentences, but that is not enough to satisfy the other cravings of longtime players.

You can purchased the product at this link