The Cloud is constantly evolving and it is not new news that most applications now have cloud based versions or cloud equivalents.  Just think of Dropbox, Google Drive (including Google Docs) and Microsoft Office 360 to see how cloud based applications are becoming the standard.  The idea that you can connect to any application from any PC from anywhere with an internet connection can also apply to your full Windows desktop environment with a Hosted desktop. 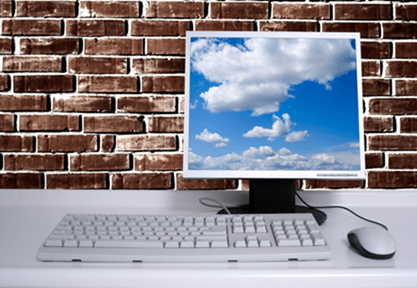 One advantage of a Hosted Desktop is that you can allow any of your users connect to that remote desktop which will always have the same configuration, interface, while keeping all applications, documents local in the cloud desktop.  This is one way to allow remote workers to have access to a single cloud computing environment where they can connect and perform work and reduces the administration overhead of having to manage and secure each user’s individual PC or laptop.  Any operating system can connect to a hosted desktop, whether your users run Ubuntu, Mac OS or an older/newer version of Windows they can connect and work on the standardized hosted desktop environment you have configured.

This can save costs by having multiple people access the same application pool, same server space as well as have access to same documents in a secure cloud environment.  A good hosted desktop environment will also have scheduled automated backups and restore capabilities so you never have to worry about losing data, or data being on one users computer that may get lost.

All hosted desktops share some common traits such as the following:

This is your Windows home screen where any number of application icons can be preset and ready to be loaded.  Many hosted desktop environments are accessible and run inside a web browser as well so they can be accessed from anywhere.

A standard exchange or email provider system is usually part of the package which allows you to create and run a full email organization for your users.  The server is connected and can integrate with smart phones in many cases via IMAP or ActiveSync.  This also gives access to a group calendar and group contact list that is the same for the entire organization.

Some examples of applications that allow for a hosted desktop environment include:

RDS is the Remote Desktop Services built into Windows 2008 and Windows 2012 servers which allows user to connect and have full desktop access remotely to machines.  It allows multiple users to be logged into the same Windows environment and have their own sessions created.

Conosco is one example of an IT Service provider that offers Hosted Desktop as well as other remote desktop services and application on demand solutions.