We finally know that Sony is indeed working on PlayStation 2 emulation for PlayStation 4 but what we don’t know is the detail about this emulation yet as Sony haven’t officially announced any specific about this feature. The confirmation comes from an email where Sony told Wired that “We are working on utilizing PS2 emulation technology to bring PS2 games forward to the current generation,” and continued that “We have nothing further to comment at this point in time.”

Even though we don’t know much about the emulator’s performance and when it’s going to be fully released for the PS4 community, we know that a few PS2 games are already out that are using this emulation. Recently a new PS4 Star Wars bundle was released including four ‘classic’ franchise titles: Super Star Wars, Star Wars: Jedi Starfighter, Star Wars: Racer Revenge and Star Wars: Bounty Hunter. All four titles are supplied via a single PSN code (You don’t get a DVD along with the PS4 bundle).  Three of those titles were officially released on PlayStation 2 and once you’ve downloaded them, you’ll see the classic PS2 logo appearing in the poor upscaled quality when launched. The whole game seems to have been upscaled and there’s no sign of messing around with the old texture confirming that the game indeed is running on emulation and is not a remaster.

We’ve got some substantial improvements to image quality, but do the games run as they should – or dare we hope, better? It’s early days right now. In truth it’s been a while since we analyzed PS2 titles, and getting a clean 480p feed isn’t easy – even with backward compatible PS3s in the house. However, it’s certainly looking promising. The emulator is clearly running these games more smoothly, with Jedi Starfighter hitting 60fps while the game running on PS2 hardware has nothing like that level of output. -Eurogamer

PlayStation 2 was one of the Sony’s most popular gaming platform having a library of more than thousands of games released worldwide and Sony’s External Development Studio Europe seems to be interested in what PS2 games fans would like to play on PS4. And out of the huge game library, many fans seems to be interested in playing the Socom 2 with online multiplayer. Out of the many fans, we even have DriveClub’s game director Paul Rustchynsky voting for his own PS2 game “WRC: Rally Evolved. 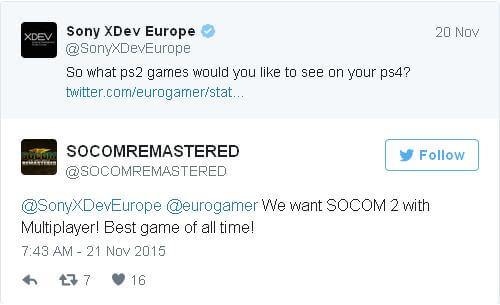 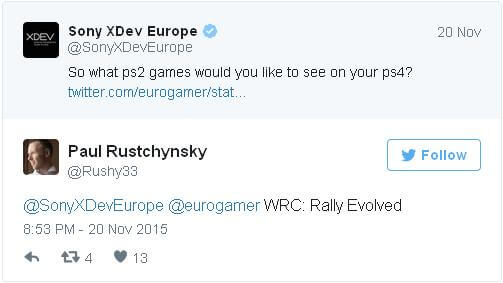 Since we don’t have any official details about the emulation feature, we can only assume that the PS4 will support online multiplayer and if lucky, you might not have to buy the PS2 titles again and use your old PS2 disk with PS4. let us know in the comment below which PS2 game you’d like to play on PS4.