Splendor by far has the simplest and cleanest rulebook. The actions are very straightforward. One is selecting the tokens (3 of the different colors, or 2 of the same colors). The second one is reserving a development card (and get a joker token – which is a wild token). Or the third one is building a development card (either from your hand, or any card on the table). Building a development card will provide permanent access to that amount of resource. Furthermore, there are noble cards that players attain by acquiring sufficient development cards. The objective of the game is to reach 15 points as soon as possible. There is an interesting twist though. Everyone will have the same amount of turns, even if one reached 15 VP first. I will discuss more about it in a later session. 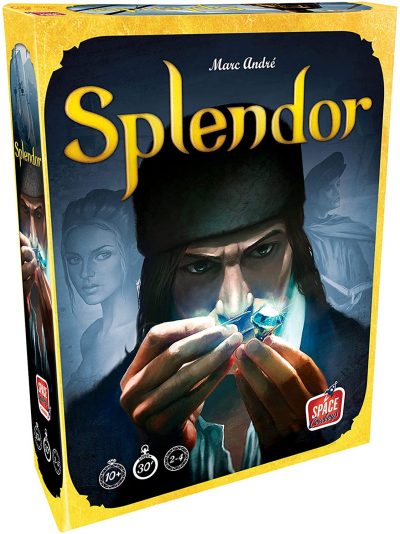 From the game setup, Splendor gives an impression of a typical engine-building game: collecting resources ( tokens) to build a basic development card, then building up to higher value development cards. Needless to say, this is how new players approach the game and will take on their first few games. But some will initiate their strategy with buying cards with victory points, so that they can skip accumulating zero value development cards.

Each approach has the pros and cons, however, the common theme is efficiency. In another word, every action should count and not be wasted. That action could block, blow smoke or even provide new opportunities for other players. Even after one player reaches 15 VP first, other player’s actions still count as everyone else will have one last turn. This happened so many times to me when I was the first to reach 15 VP but ended up losing the game.

In addition to efficiency, Splendor is a game of adaptability. With 25 face-up cards, a set amount of nobles and limited tokens, players will easily have conflicts of interests against each other – shortage of tokens, unavailable development cards, or even worse, aimed noble(s) taken away. Only by being pushed in these situations, will players have to confront it, adjust their own ideas and preconceptions. This will definitely give someone a huge adrenaline rush, especially when they just sabotage someone else’s master plans. Splendor will toggle how players adapt to switch from Tactics to Strategies and vice versa. Hence, some might embrace this and some might not. 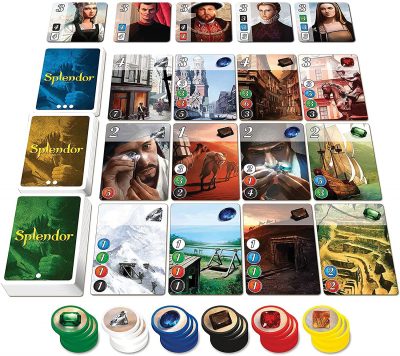 Juxtaposition of Tactics and Strategies

With a max of 10 tokens at disposal, it is obvious to other players about which development card you have had your eyes on; especially at the beginning when players can only build cards with tokens. It is inevitable that you will be sabotaged. This will not be the only case when you have to quickly deploy your new tactics and drop your grand schemed strategy.

Indeed, when you realize your opponents are in need of more emerald tokens, why do you want to release yours to the bank when you can just keep it for another turn or two ? Or when you realize your opponent will win a game with just 1 or 2 ruby development cards, you will have to thwart all his/her possible attempts to get them. You can either reserve/build all the development ruby that they can build/reserve, or you just don’t open any new level 1 (O) development card out.

On the contrary, you cannot reach 15 points by just relying on being reactive to the board and what others’ actions are.It is crucial to have a concrete plan of what you will do in the long term. There might be a pattern among the nobles – more than three of them require at least 3 diamonds. Similarly, in the top rows, there are some covert patterns among those 4 development cards as well.

If it is too far ahead of time, you can totally strategize to acquire the second level of development cards as well. Either through collecting the right colored tokens, or implementing the infamous “engine building” mechanism with the level 1 development cards. In addition to strategizing visible factors on the board, you can also have a grand scheme in secret that no one will be able to figure out : reserving the development card from top of the deck. Undoubtedly, this move will involve the luck factor of this game, which I will discuss later.

Splendor is a well-mixed juxtaposition of tactics and strategies. Those who benefit from turn-to-turn events shall not contrive to swing as much as large victory points. Meanwhile, those ,who rely on their master schemed, shall get stuck in their own stumpers. There needs to be a right ratio between these two. Certainly, regardless of which approach you favor more than the other, you will not achieve what you want without some fights. Fortify yourself! 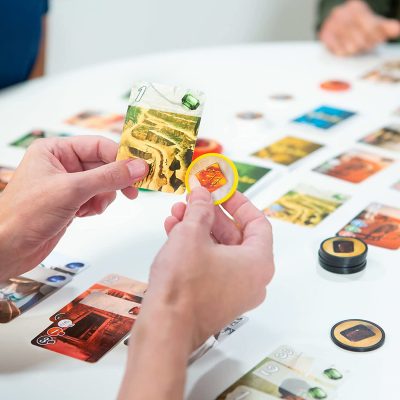 When it comes to games, like it or not, luck is always a part of the game. Splendor is not an exception either. From the latest drawn card on the table, or the wild move to reserve the top card from one of the three decks, to the smart move executed by others to block resources or cards. However, as mentioned above, Splendor is the test of adaptability and efficiency. Players will usually be put in the spot where they have to consider carefully and wisely. If buying a card is not an option, how about taking resources to block others? How about reserving a card for future turns? Or even reserving a card to payback the karma ? There are always more than one feasible options. Ensuring all the turns are not wasted. And when Lady luck smiles, it’s time to strike back.

When it comes to Splendor, there are various reasons that people won’t like it. They are all valid points. The game can be a little to dry, or it does not really advocate communication or conversation among the players. Some claim that playing Splendor is no different from doing some Math homework. To some others, they might not like the game due to the dynamic shifting between strategy and tactics. Especially when this shift is more likely to happen multiple times in the game.

Nevertheless, Splendor is one of masterpieces that is easy to teach and hard to master. With sufficient observation, resource awareness and the skills to toggle between strategy and tactics, novices will be able to beat the skilled ones. In the end, it is a great introduction game for anyone who wants to start their journey in the massive board game universe or just a step up from Monopoly. 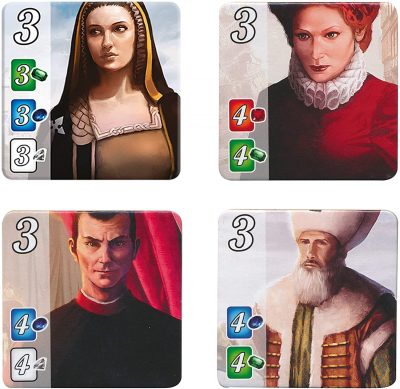