So a couple of weeks ago I ran across another streaming channel called HelixxVR and I realized really quickly this wasn’t a singular Twitch streamer but a channel with a group of streamers that all stream to the same channel much like we do at the DragonBloggers Twitch channel.  Their primary focus as you would guess from the name is VR titles which gives them a specific niche, as you know it is going to be VR content.

You can check out their Valve Index Review to get a feel for their style and quality.

I was able to line up an interview with se7en from HelixxVR. 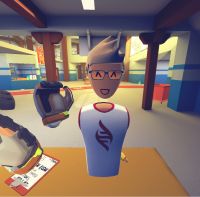 Se7en (Helixxvr): My name is se7en i am part of Helixxvr. I do the streaming and i’m generally seen as the face of Helixx. Im originally from London but now live in Thailand.

Helixx is a group of VR enthusiasts from around the world. We do Reviews, Game testing and promote everything Virtual Reality.
We set up in 2016 with the aim to help small VR game devs and give them somewhere to share and promote their games we did this via our facebook and youtube channels

Justin: When did you first start streaming?

Se7en (Helixxvr): On the 27th April 2018 i did my first official Stream on Twitch as another platform to showcase Virtual Reality, Prior to that I spent 6 months researching Twitch, networking within different communities and talking to successful streamers asking for advice
We set ourselves a target to hit partnership within the year. In November 2018  we started our partner push to hit our average 75 viewers and in December 2018 we sent in our application to Twitch after a long 120 day wait we finally got partnership in March 2019.

Justin: When did you first realize you wanted to become a Streamer?

Se7en (Helixxvr): I don’t think I ever wanted to be a streamer it was more of a natural progression from what we were doing with Helixx and as there are very few VR streamers it just seemed like a good thing to try.  After that first stream and the buzz you get from going live I was hooked and found that I was actually good at entertaining people also because we already had a community from youtube and our discord it was easy to grow Twitch.

Justin: What platforms do you stream on most often?

Se7en (Helixxvr): Twitch, I have tried other streaming platforms but it’s almost impossible to stream to them all and keep up quality content without burning out. I think it’s important for the Helixx brand to be on as many as possible and i’m sure in time we will find a way to make more time to get onto Dlive,mixer etc.

Justin: What devices do you prefer to stream from?  (Console, PC…etc)

Se7en (Helixxvr): I currently use a HTC Vive, Oculus Rift and the new Valve Index Headsets to stream VR and a fairly powerful PC.

Se7en (Helixxvr): My advice for anyone streaming is Have Fun, Be Engaging, Keep Talking, Network as much as you can and Turn off your numbers. It doesn’t matter it you are streaming to 1 or 100 viewers if you follow those simple rules people will come and watch you.  Use as much Social media as you can to promote yourself and build your community

Justin: Where, When and What Can People Find You Streaming?

Se7en (Helixxvr): I try to play as many different styles of VR games on stream as possible but found that i’m very good at Virtual Dj-ing and you will often see me in Tribe playing music. We actually have our own set of skins on the decks because of our work with the Devs in making it streamer friendly and our Sunday Streams we are joined by a Professional Dj, DjTrix who plays some of the freshest sounds and it’s always a party in that stream. I stream Tue, Wed,Thur, Fri and Sundays https://www.twitch.tv/helixxvr check out the channel and check out our Youtube channel for reviews and VR guides https://www.youtube.com/c/helixxvr

Justin: Do You Want to Give Any Shoutouts or Promote Anything?

Se7en (Helixxvr): To end this interview i wanted to say a big thank you to all of my community for being there in the early days and still keep coming back and supporting. Also to all the VR Devs that allow me to play these awesome games and experiences for whoever watches to enjoy as much as I do. A special thanks to the other members of HelixxVR: Kerminater, Eden and Flag for just being awesome.

I would like to thank Se7en for the interview and let readers know if they are interested in watching VR game content, listen to their Virtual DJ session and more check them out.  A few things I found in common of course with the HelixxVR was that we both run a platform with multiple streamers who contribute and they also do giveaways using the Gleam Platform, I actually first found out about them through their Elgato Streamdeck Giveaway which led me to find them on the various Discord groups.  You can also find more about them on their website https://www.helixxvr.com/ and the HelixxVR Discord Channel.