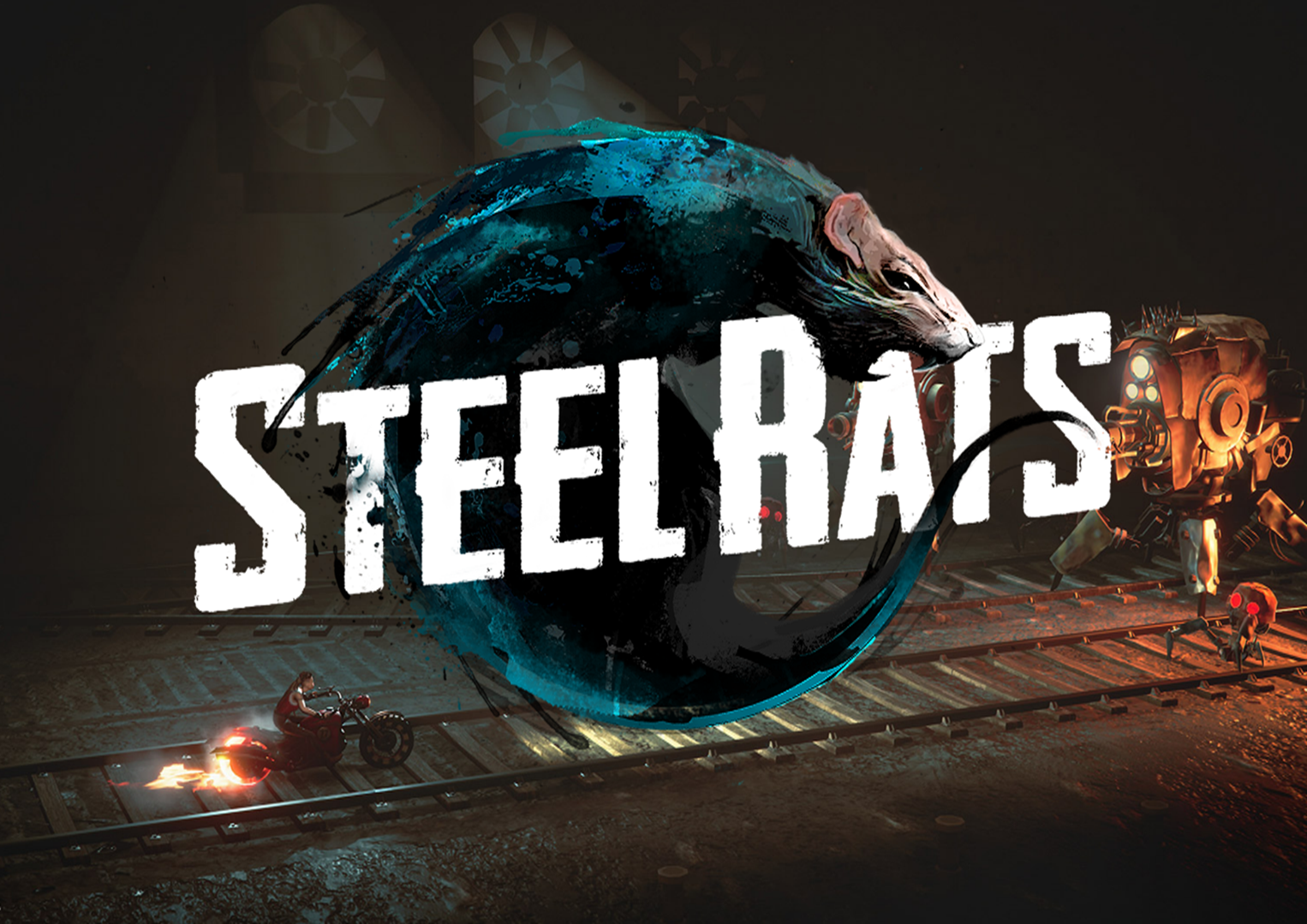 London, 28th June 2018 – It’s too late to run, it’s too late to hide, the alien invasion we’ve all been dreading has finally landed and it comes in the shape of a 10-foot-tall, 1,900-pound junk robot that can be found at a gaming convention near you. ‘The Screamer’ is one of the deadliest enemies in the upcoming motorbike combat racer ‘Steel Rats’ and this new trailer reveals how the ingenious ‘Ride Again’ workshop in Poland brought this metal monstrosity to life as a playable demo station and junk infused work of art.

Wreck and ride in Steel Rats an upcoming 2.5D action arcade title, that fuses motorbike combat with death-defying stunt racing gameplay. The heroic biker gang are tasked with stopping an invading horde of alien Junkbots and now one of the deadliest enemies from the  game has been made into a towering robot in real life, that also happens to be the most immersive ways to play the actual game.

Built over 90 days from 500 pieces of steel, the giant structure houses 5 LCD monitors that can be used to play the actual game and has already been on display at ‘EGX Rezzed’ in London, ‘Pixel Heaven’ in Poland and will next be invading Gamescom this August in Cologne, Germany.

‘Steel Rats’ is coming to Playstation® 4, Xbox One and PC later this year and is already lighting up the 2018 awards scene with eight nominations and one win for ‘Best Gameplay’ at the Game Connection Awards, a nomination for ‘Best Indie Game’ at the Digital Dragons Indie Showcase and winner of ‘Best Gameplay’ at Pixel Heaven in Poland earlier this month.

Ride in style through the retro futuristic world of Steel Rats. Set in an alternate version of 1940’s USA, gear up and mount your chromed stallion and save Coastal City from the invading horde of Junkbots. Your motorcycle is your weapon designed to crush your enemies in awesome and stylish ways whilst traversing up, down left and right, over rooftops and through enemy-infested tunnels. 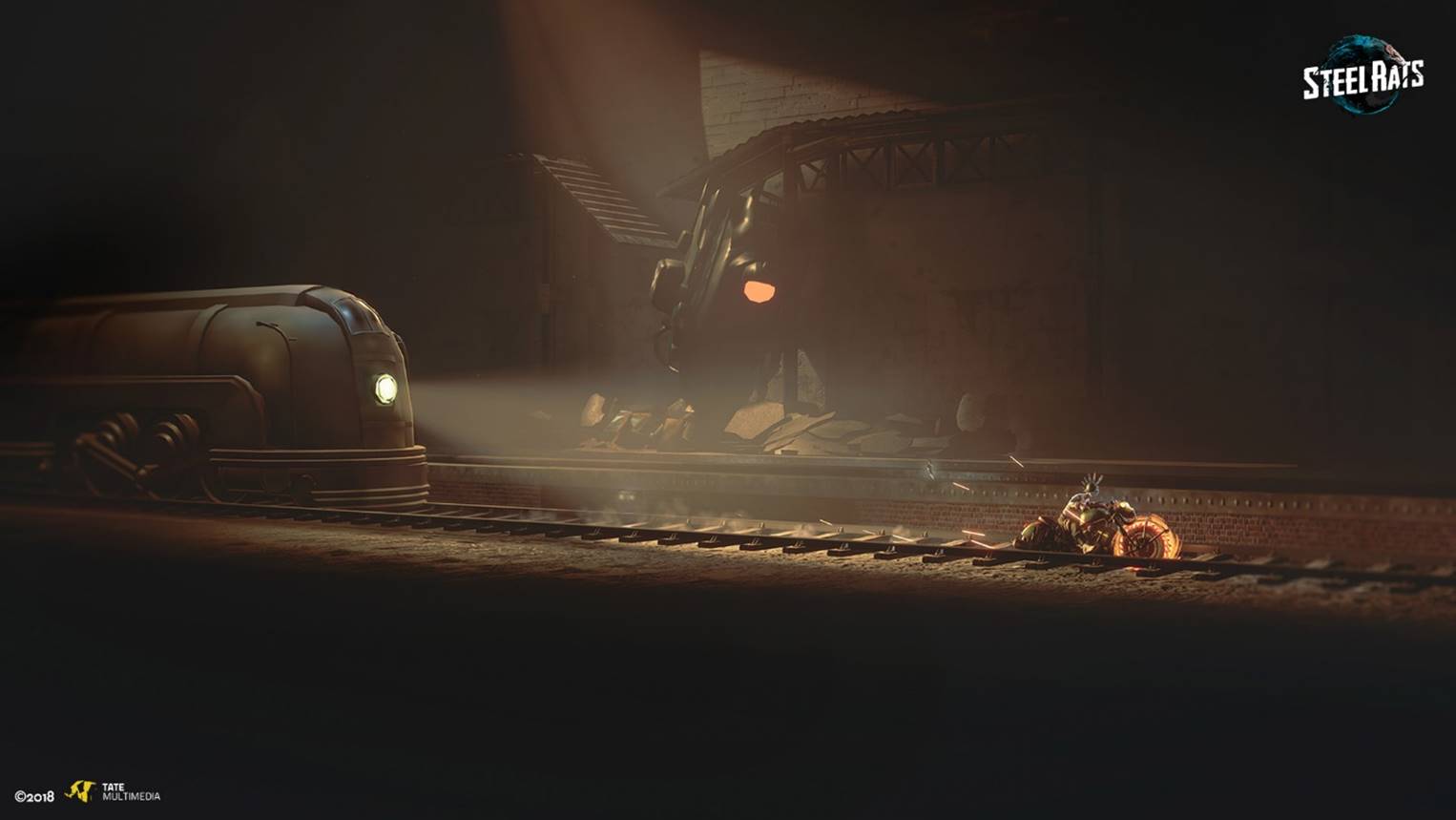 Race, shoot, stunt all for the price of one!

Now for something a bit different. Steel Rats blends genres in a way no game has before, infusing 2.5D stunt bike, racing action with precise platforming and intense vehicular combat.

Your motorcycle is your weapon in the fight against an invading horde of alien Junkbots. Combine up close melee combat and precise, deadly shooting with a ludicrous vehicular arsenal including wheel-mounted saw blades, harpoon guns, flame spewing exhausts, and handlebar mounted mini guns. We’re sure you’ll find some juicy ways of using these tools to wreak havoc on your enemies.

Start your engine and master the realistic physics based controls of your bike to perform stunts and skillfully destroy Junkbots with a barrage of special abilities and weaponry. The more creative the destruction the better, ride up walls, backflip of the side of buildings and unleash havoc mid-air whilst riding upside down.

Discover the secrets of Coastal City and reveal the mystery of the Junkbot invasion. Explore each level, find every collectible, unlock new areas and dominate the leaderboard.

Choose which of the four members of the Steel Rats you want to play as and switch them up any time you want. Each character has a unique ability and weapon equipped to their custom built ride, allowing you to unleash some serious damage on the Junkbot horde.

A hardened biker hailing from Boston. Proud leader of the Steel Rats, riding his armored bike straight into the fray.

Born in Brasil, she grew up on the streets of Coastal City. A bold racer, leaving her enemies in a wake of fire.

A long time performer of a travelling German stunt circus. A madman who likes to live (and ride) on the edge. 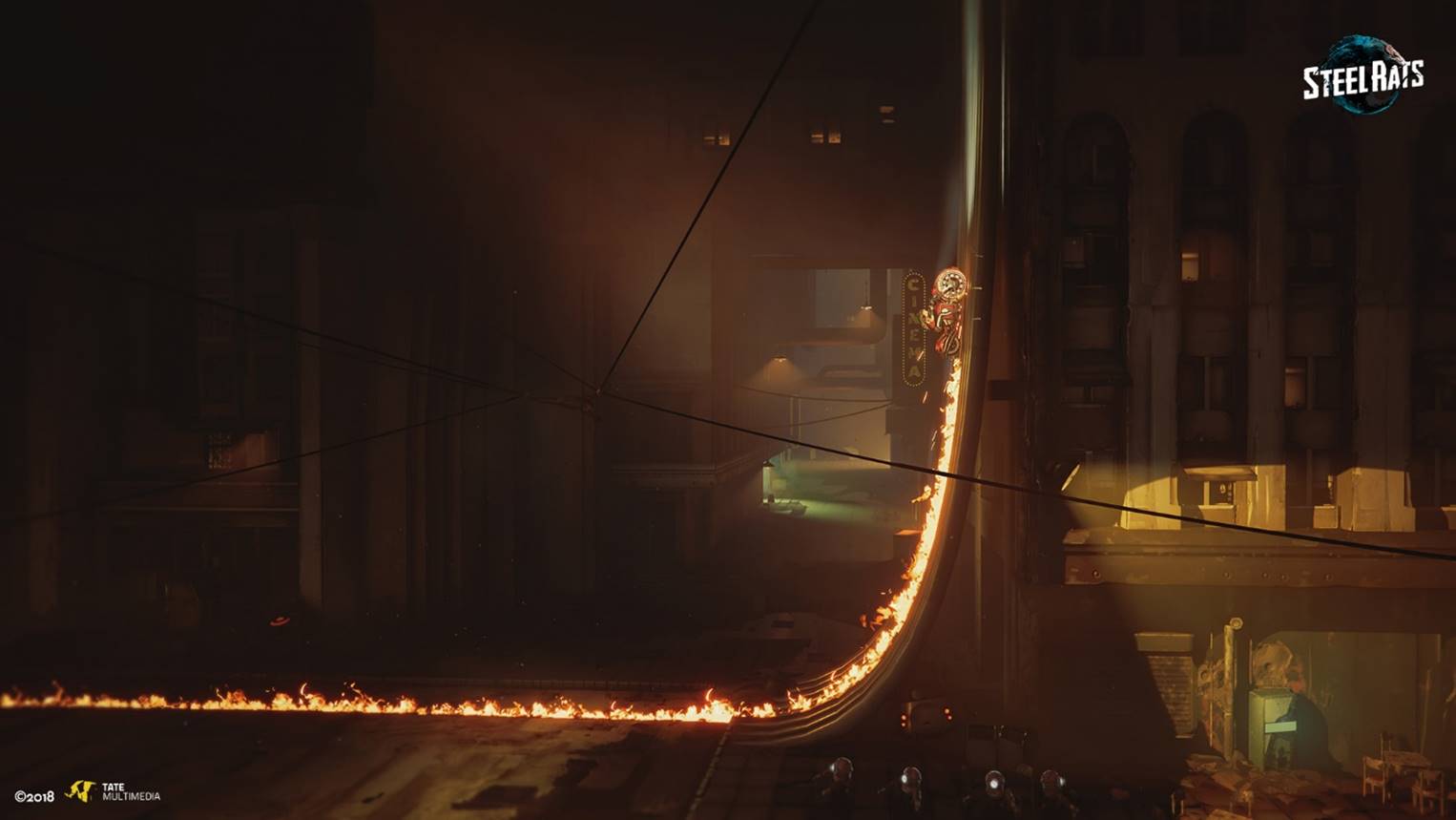 Tate Multimedia S.A. is an independent games developer and publisher based in Poland (Warsaw-HQ), with successful operations that have spanned across Europe, North America, Japan and China since the year 2000. The studio operates according to the “house of ideas” model on an everyday basis, which means no idea is off the table allowing developers to have the creative freedom to continually seek new, daring, and even risky projects, with a team of almost 40 creative professionals. Beside the already announced ‘Urban Trial Playground’, Tate Multimedia also announced another game for 2018: Steel Rats – a 2,5D platform combat racing game set in a retro futuristic environment, to be released on PC, PlayStation® 4, and Xbox One®.

About The Ride Again Workshop:

Ride Again Workshop is a group of multi-skilled enthusiasts who focus on prop making, concept art, graphic design and product creation. We engage in projects from the earliest stages of technical analysis and creative design through to manufacturing. We prototype models and build full scale projects from concept through to delivery. From our team you will get prop model, 2D/3D graphic design, press packs and more.

We hope to help you realize project of any scale, single or multiple item. Feel free to contact us at

Check out some gameplay footage that Iggy did for ThisBytesForYou