This is a review of the STRONKER 6-Outlet Home/Office Surge Protector which features 6 AC outlet ports and 8 USB charging ports.  Now these are what I call “charging station” devices which are designed for you to create a location in your home (usually office desk) where everything can plug in and charge from one location.  The Stronker Power Strip has 8 USB ports which are more than most charging stations which have 5.  It does however balance 4 of them for 1A output devices and 4 for 2.4A devices, so 4 phones or Bluetooth earbud/accessories and 4 Tablets can charge at the same time.  The 6 AC outlet ports have a built in surge protector and I like that there is a switch to power off the entire charging station. 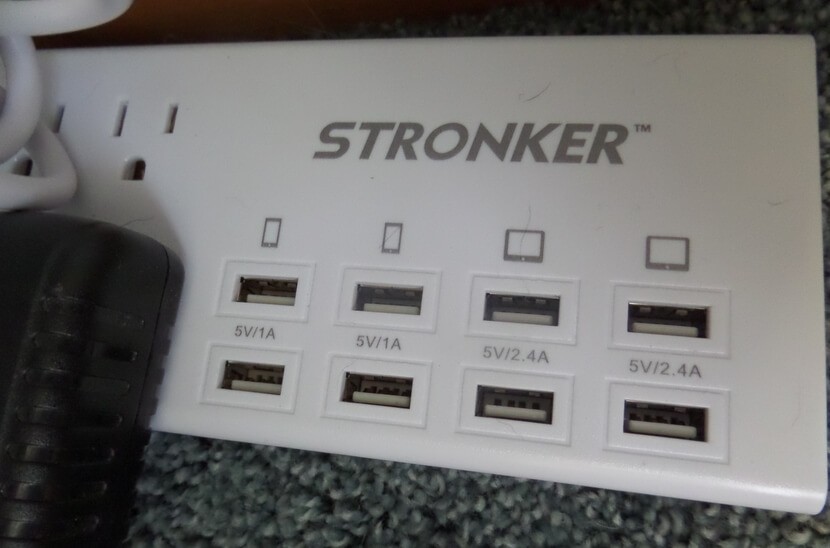 There are a lot of positives with the STRONKER 6-Outlet Home/Office Surge Protector from it’s 7′ long plug which allows you to plug it in most locations without needing an extension cord, to it’s inclusion of a velcro tie strap to help manage cables.  The inclusion of a mounting clip so that you could screw it in and mount it to a wooden surface or wall so that it rests with it’s back against a wall either horizontally or vertically is another nice touch if you don’t want to leave it sitting on the floor. 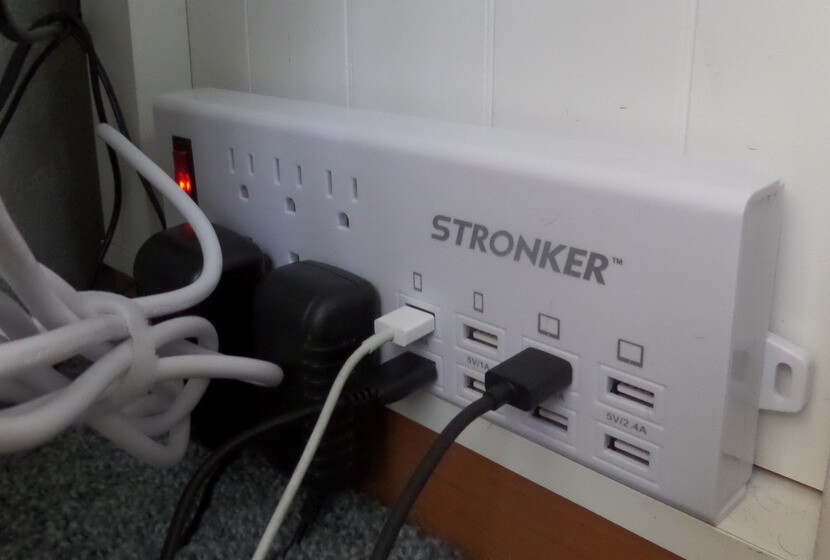 To do my review I replaced my existing power strip and 5 port USB charger, with the 1 Stronker Surge Protector.  This was my central setup in my living room and powered my PlayStation 4, LCD TV, PS4 Controller charging and all gadgets in the house charged on this station including 2 Kindle Fire HDX 7, 1 Kindle Fire HDX 8.9, HTC One Remix, 2 iPhone 5S, and various Bluetooth headsets, speakers and more.   I easily could charge 8 devices from this one location, I have 4 Bluetooth Headsets alone plus all those devices in the house. 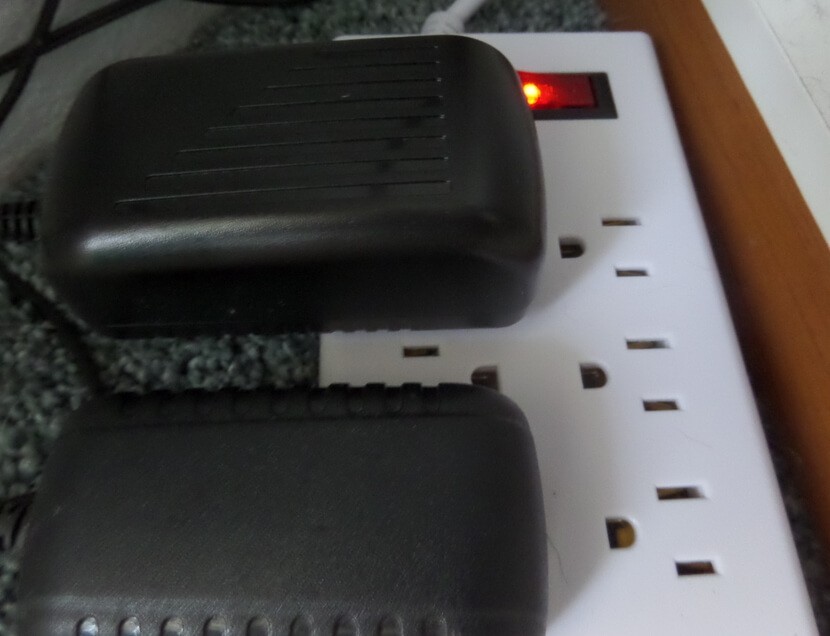 The only real issue with the Stronker power strip was the fact that all 6 AC outlet ports are so close together and for some odd reason they all face inward.  You see how the grounding hole in the 3 plug outlet all face inside the power strip?  This means that devices that are 3 prong all face toward each other.  Also because of this, this means that plugs that have bricks or large plug heads will conflict and interfere with each other. 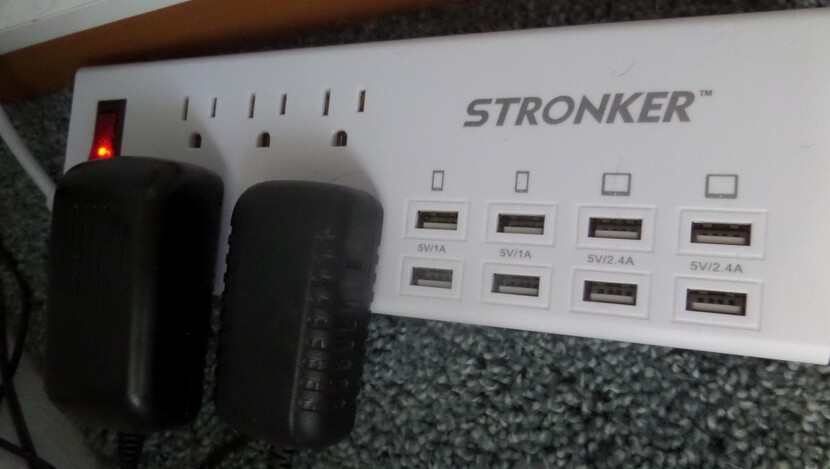 In the above image you see I had to actually plug in these adapters incorrectly, now they don’t have separate Negative/Positive plug size differences so I reversed them so that they were plugged in with the heads going away from the center of the power strip.  This is actually plugging them backwards and if you had plugs that had a larger prong (white) then you wouldn’t be able to plug them in backwards like this and simply they would conflict.  If plugged in correctly, 1 of those power adapters can block 4 AC ports on the Stronker power strip.  Had they simply reversed the direction the plugs were facing and made the 3rd hole pointing away instead of toward the center, then you could still viably get 4 plugs out of the 6 working if you have large power adapter heads. 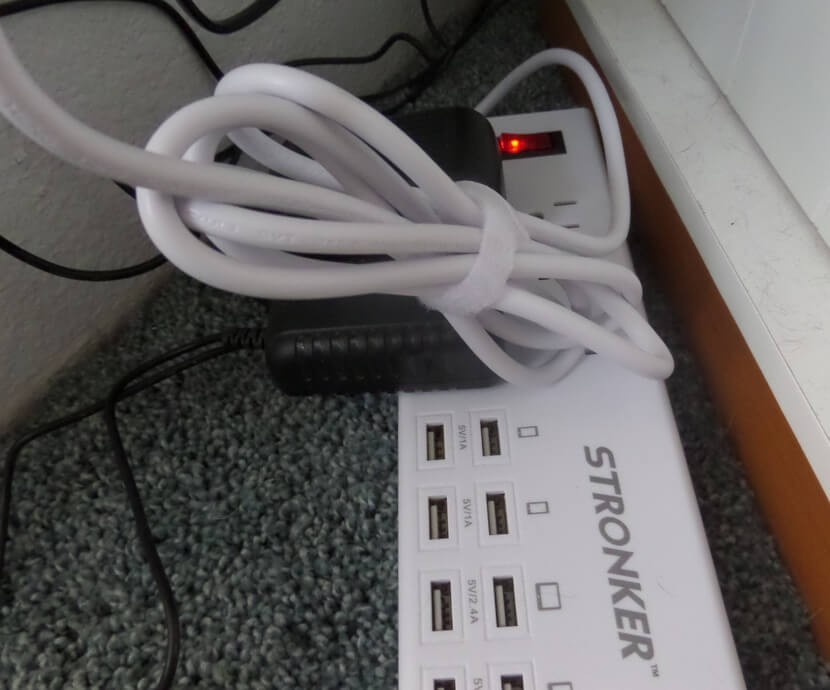 The USB charging ports are fine, I can understand they can’t make all 8 USB charging ports 2.4A as you would potentially blow a 15A circuit or trip it if you had 2.4A drawing devices in all ports, but I do think the design decision on the AC ports was flawed and unless you have small 2 prong plugs for everything you want to plug in, you will not get to use all 6 ports.

Note, I did have to buy longer 6′ USB cables, as when using a USB charger you typically leave them on a desk so you don’t need as long USB cables, but when using your power strip as your USB charger, typically you want this close to the floor, so you will need longer USB cables to charge your USB gadgets.

Disclaimer: Stronker provided us with the STRONKER 6-Outlet Home/Office Surge Protector so we could do a thorough and accurate review.  All opinions are 100% mine and mine alone.