It’s true that the joy of building your own computer is incomparable. However, if you’re investing $1000 in a computer and it’s going to be your first time building it, then might as well play it safe for now and choose among the best $1000 prebuilt gaming PC. Not only that you avoid the chances of messing up (which is really high) but you can save yourself time and hassle as a whole.

If you’re anything like me, you love the grind of building your own gaming pc. However, the beauty of building a PC can be ugly. Well, not can be, will be. Here’s the situation:

I built my very first gaming computer in 2013. It was a much simpler time back then. Gas was only $4.09/gal in Oklahoma. Milk? $3.75. Computer parts, however, stayed loyal to their pricing. I decided it was time. Time to venture in to the world of computer gaming.  Little did I know, just how difficult this venture would be. I started simple. A GTX 760 would suffice. Paired with that? An Intel i3 with the good ole’ stock cooler. Wires everywhere and my pride high, my first computer was completed. What had I done? See below:

Now, she wasn’t much, but she did what she could. I once saw almost 60fps on GTV 5 at high settings. However, the performance was short lived. Overwatch? Psh, she ran Overwatch on Epic settings at 1600×900 with ease. Over time, she served me well. From my editing, gaming, and the occasional inappropriate website (movie streaming sites you perv, I know what you thought I meant), the beat did the damn thing. It was time to put her down and move on to the next stage. I let her down easy. With care, the drives were wiped and the cords were wrapped. So long, Betty (just named my old PC Betty.)

Now! On to Riley (the name of my new PC). She’s strong, beautiful, and wicked awesome. However, she came with work. I double checked compatibility, everything was good. My budget was intact and I was ready to build and get the best gaming performance with PC that I could get. Here’s what I came up with: 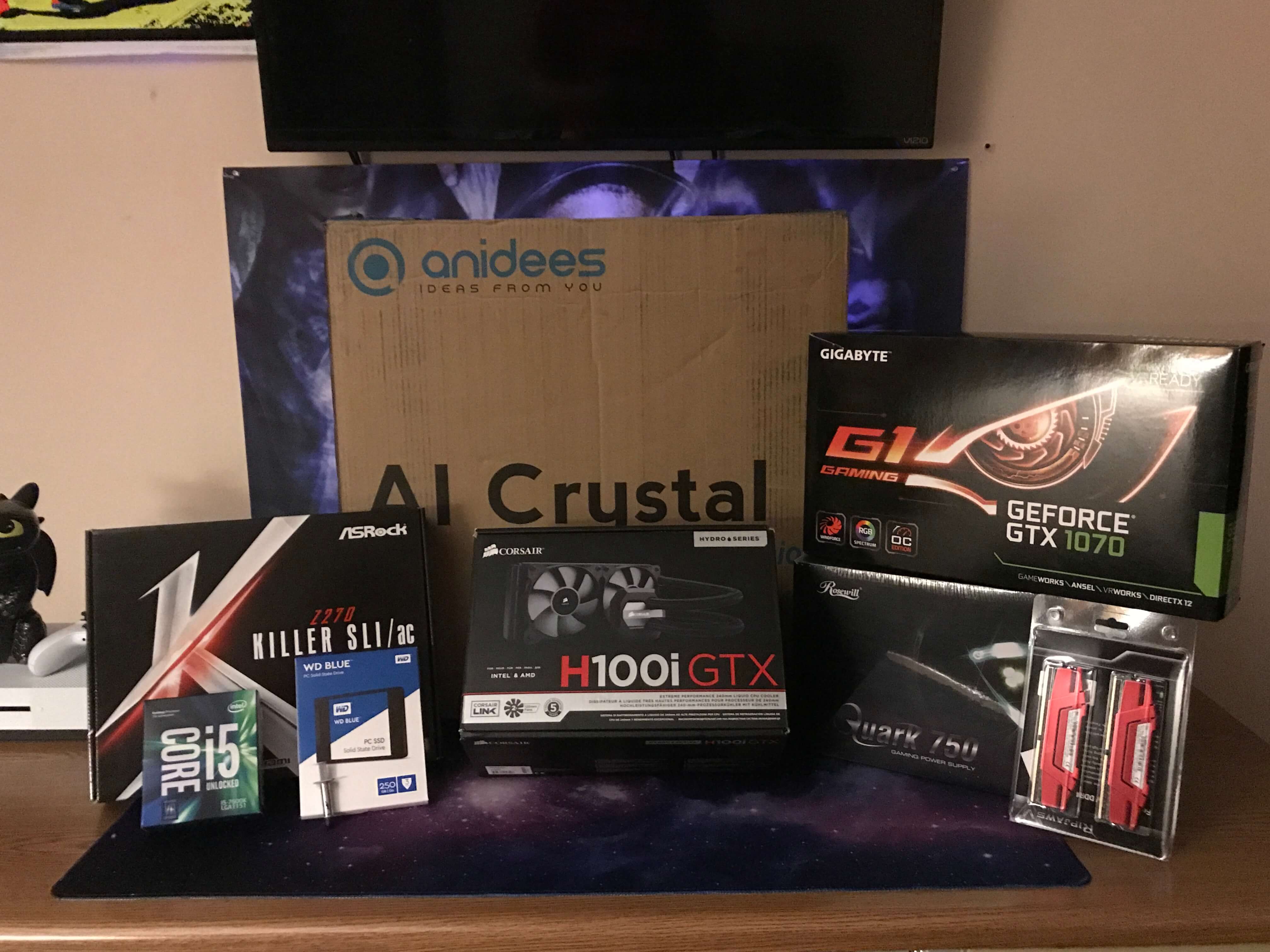 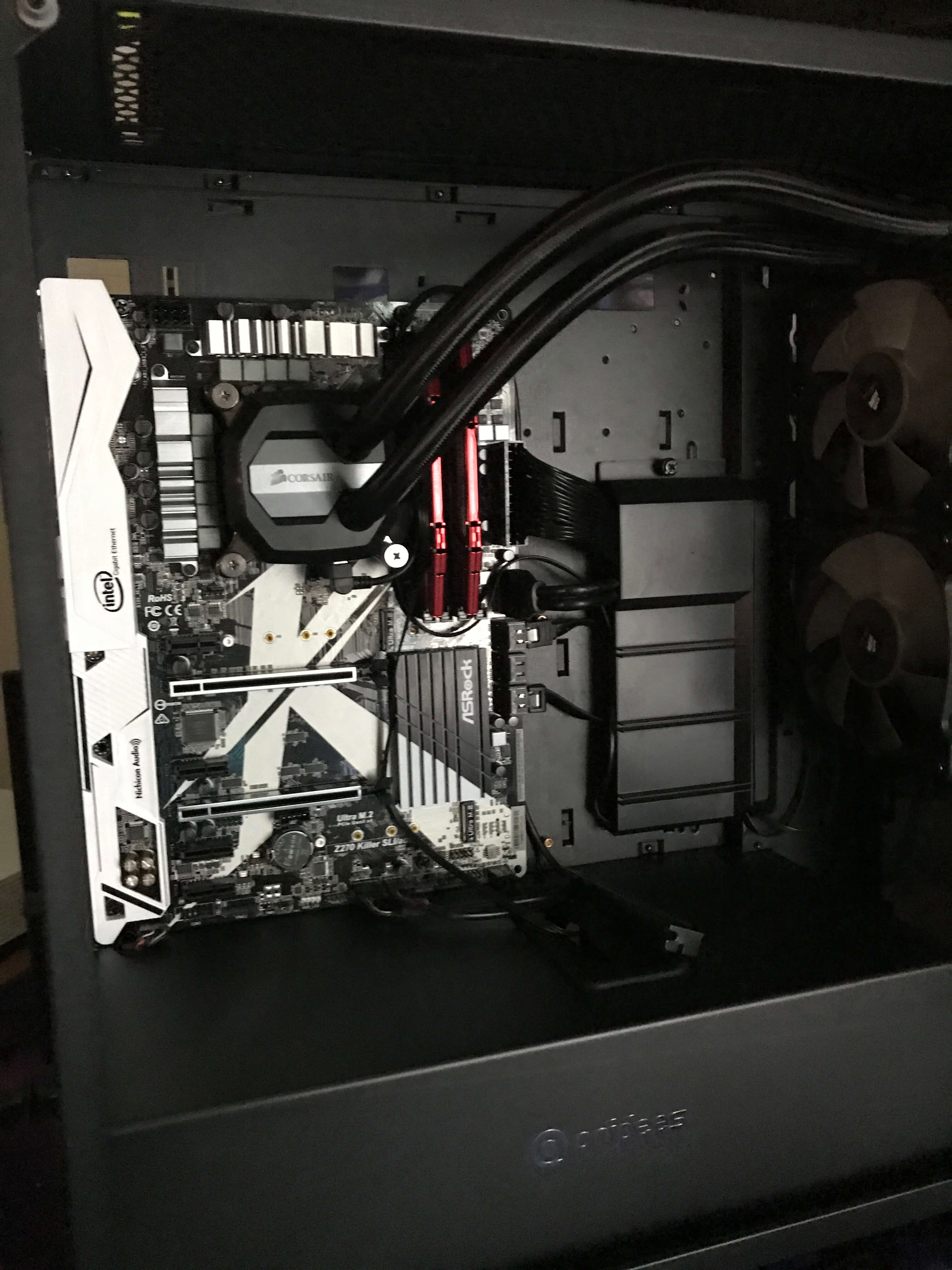 Yes, I know, there’s no graphics card. Leave me alone about it.

So, I got everything installed. She looked much more beautiful than my messy ex and I was ready to turn Riley on.

3.
2.
1.
…..Nothing.
IT DIDN’T TURN ON!
Now I may not be a holy man but what had I done to deserve this? I spent all my moolah to make this thing turn on when I pushed the button but when I powered her on, nada. I was distraught and frustrated. What would I do? TROUBLESHOOT?! I guess I had to. So I began. Reinstalled all movable parts, switched RAM slots, checked heatsink, removed CMOS battery. I tried it all, to no avail. It was at the moment that tears were forming and my muscle were tensing up that I tried one last thing.

Switching every. single. power. supply. cable. I was lucky enough to have a full modular power supply.  So there I was, switching cables when I heard a slight zap. What had I done?
Has everything in my life led me to this moment? Had I possibly just fried my motherboard after all hours of troubleshooting?

Apparently there was just one bad wire in my power supply causing everything to short. Riley was tough but I managed to turn her on after so long. No innuendos intended. I saw the ASRock splash screen appeared on my motherboard and I went crazy. I was so happy.

Happiness is served to be a short meal, homie because the computer turned off before Windows loading logo even appeared.

I cannot do this. Is my life pushed to that of a Six Flags?
All these ups and downs.
All these twists and turns.
All these single mothers with out of control kids that she yells at while eating her ice cream cone.

Okay maybe not the aforementioned but you get what I am saying. MY LIFE IS NOT A ROLLER COASTER. MUST THE GAMING PC GOD’S DO THIS?
A tear may have fallen that day but will you ever know? Of course not. I gave up for the night. I tried all I could to come up short. I felt like the 90’s Buffalo Bills. The next day I gave it one last chance before I gave up and returned parts. I looked myself in my mirror: “You WILL keep Riley on”.

I walked up to the computer desk, sat down, and began. All over again I troubleshooted.  Nothing was working. It was time to give up on Riley. She was beautiful, but damn, no breaks. It was the moment I got up that I realized I had forgotten to do one thing:

Forgive me my PC gods for cursing your name. I will never be the same after this. It was never Riley, it was my impatience and lack of detail when working with her. I installed Windows and everything worked. Besides running into some minor fan issues, my computer was up and running strongly. Our relationship was beautiful. It still is.
A beautiful 2K monitor paired with Battlefield 1 at a solid 75fps makes Riley my favorite to date.

You see guys… PC life is the hard knock life. You fall and rise.

In the end, Riley is worth it, she always was.