Did you remember that Dean went to Purgatory at the end of Season 7 of Supernatural?  I know I forgot this, but it quickly came back to me when the show opened with Dean scaring some campers and him looking like hell, blood everywhere.  It wasn’t exactly a shock to see him make it back, for one the show wouldn’t exist without him, but the Winchester boys have gone below and come back before. 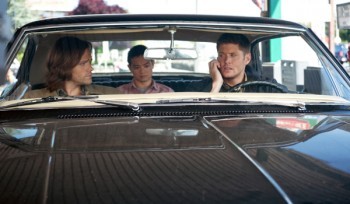 However, this time the show gives an uneasy feeling of Dean’s return because we see him find a grave, cut his arm so the glowing red “stuff”  in it can revive the bones, and then what appears to be a Leviathan thank; and HUG; Dean for helping him escape.  Not long after Sam gets in the Impala and meets Dean at an abandoned house.  Dean gives Sam grief for going off the hunter grid and they begin looking for Kevin, the kid turned prophet from last season. 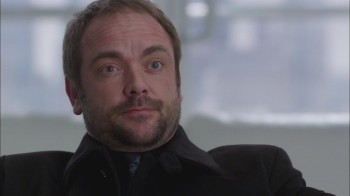 Without giving everything away, they find him and learn that another “word of God” tablet was shown to the kid and he deciphered some of it before hiding the powerful object from Crowley.   He reveals to Sam and Dean that there is a spell on that tablet which tells how to lock the demons in Hell, forever.  The idea is interesting and incredible all at the same time.

Rumors have been floating around that this is the final season of Supernatural.  On one hand I get it, the show has been around for a long time and, like many of them, is starting to struggle with show ideas.  Don’t get me wrong, I still love the show but with the last two seasons following on main path, well the cool new creatures being discovered every week is gone.  That was a huge appeal of this show in the beginning.

Of course, with the rumors about the show ending I was wondering how it would happen without knowing if the boys have to keep hunting the rest of their lives or finally have a chance to truly settle down; like it seemed Dean was able to a few seasons ago.  Kevin’s revelation could be the perfect answer to this.  If that is the case, then this will be an interesting season to see how they get from “the spell will get rid of all demons on Earth” to actually accomplishing this.