Not long ago, the idea of hanging a TV on the wall like a painting was the stuff of science-fiction stories. With the advent of plasma and LCD technologies, TVs became significantly thinner but were still hefty at three or four inches deep and heavy enough that the largest sizes could be quite unwieldy. The paradigm of depth is shifting for flat-screen televisions, as manufactures like Samsung and LG take advantage of nascent technologies to achieve minimal screen thickness that even a few years ago was unimaginable. The key component to these displays are OLEDs, or Organic Light Emitting Diodes. These differ from regular LEDS by producing their own illumination at the pixel-level, eliminating the need for the external backlights that comprise the majority of a flat-screen’s bulk.

LG wowed crowds at CES 2012 with the debut of their 55-inch OLED TV, the 55EM9600. Achieving a staggering 100,000,000:1 contrast ratio, the display provides the bright, punchy colors and deep blacks that OLEDs are known for at a previously unheard of screen size. At just 4 millimeters thick, the 55-inch unit weighs only 16.5 pounds. The miniscule depth, combined with a bezel just 1mm thick helped LG secure CNET’s “Best of Show” award. LG remained secretive on the remaining details of the display, which is due to hit the market late 2012.  By revolutionizing the thickness of televisions with its new television, LG continues to deliver exactly what consumers want: thinner televisions and better screen quality. 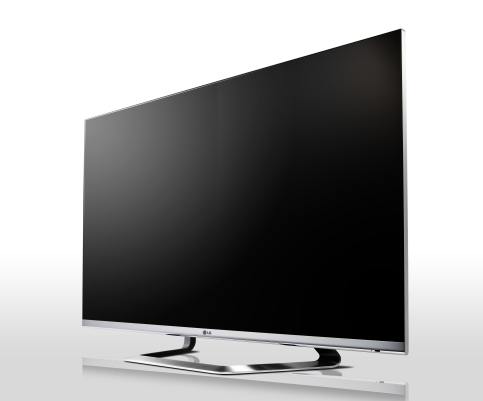 For those needing an ultra thin TV a little sooner, LG showed off their LM line of LED TVs, which borrows stylistic cues from the EM9600. Most noticeable is the super-thin bezel which, at 5mm thick, is currently the thinnest on the market. At the top of the line is the LM9600 series, featuring local dimming, full-array LEDs, while the more affordable LM6700 series uses an edge-lit display. All models will display video in 1080p, feature passive 3D and LG’s Magic Motion remote, and will be available in 47 and 55-inch sizes, with a 60-inch LM9600 also planned. The 6700 series will hit stores by March this year, and the 9600 in April. Prices have not been announced for any of the sets.

Rival South-Korean electronics giant Samsung fired back at LG’s offerings, debuting a 55-inch OLED TV of their own. Samsung uses their proprietary Super OLED technology, which controls color on the pixel-level, unlike traditional color filter-equipped OLED displays. However, no other details on the set were available.

Expanding on their available LED line-up, Samsung also showed off the new ES8000 series, which focuses heavily on “Smart” options. These models include the typical connected-TV apps like Netflix, YouTube and Facebook. The crowning feature is the inclusion of an integrated camera and microphone, enabling “Smart Interaction,” allowing viewers to control the TV or its applications via voice or motion-control. Displays are 3D 1080p with a 240hz refresh rate, wrapped in a sleek metallic design boasting a 0.2-inch thin bezel. Five sizes will be available between 46 and 65-inches. Prices were not announced, but the sets should start arriving as soon as February.

The rapidly developing OLED and LED technologies are allowing manufacturers to build TV sets that can be placed literally anywhere. Thinner than a magazine and wrapped in sleek materials, TVs can now complement a room’s design. It’s only a matter of time before they can be taken off the wall, folded up and stuck in a pocket.