I have been a fan of Elite since the Commodore 64 days and played Frontier Elite II on the Amiga computer, so I was an early backer on Kickstarter for Elite: Dangerous and have sent a lot of time in this game over the past two years owning the Horizons Season Pass and enjoying each update as it comes out.  Throughout all this time, I haven’t yet earned my way to one of the flagships in the game the Anaconda, Imperial Cutter or Federal Corvette.  I just don’t have the play hours to grind just for credits and rank to get those three big ships, well the last two require rank but not the Anaconda.  Though I am very close to getting an Anaconda and I could buy one if I were willing to sell my other ships but I can’t part with them, I find I like collecting the ships and using them for there specific purposes and engineering each one to customize and make them feel unique.

My Asp Explorer is just that, my Explorer and was the one I used to unlock Professor Palin and get 5000ly from the bubble and back.  The Asp Explorer is engineered to have a 44ly jump range with it’s Frame Shift Drive and this is with it still carrying a fair amount of equipment and some shields.  My Asp Explorer is my ship that I use to go find materials on the surface of planets like Nobium, Yttrium, Arsenic and Polonium. Because of it’s jump range I used it to do the rare runs needed to unlock every single Engineer currently in the game as well, I run it as a combat explorer in that it has 6 multi-cannons, 5 are engineered to Incindiary Rounds and 1 with Corrosive Shells, my AspX now when in combat can single any single ship and shut it down thermally, as even NPC’s I can fire and cause them to overheat so bad they can’t fire back at me and just sit there pointed at me with no weapons shooting out. I ran against a Viper Mk IV with PVP and even with my Size 3 shields I can shut it down because it can’t return much fire while overheating.

Here is one of my 2 hour streams traveling to unlock Prof. Palin

Now if they had heat sinks it would probably be tough, but I am also engineered where I can boost to over 400 m/s for a short period of time which gets me out of danger as well. There are some incredible sights to be had in Elite: Dangerous and these were taken in my Asp Explorer, if you just want to chill and listen to some music and earn credits just jumping system to system exploring the galaxy, the AspX is a fine ship. 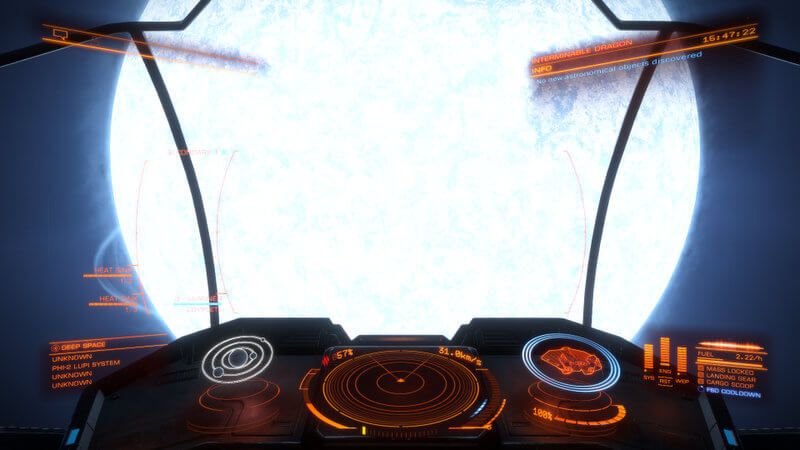 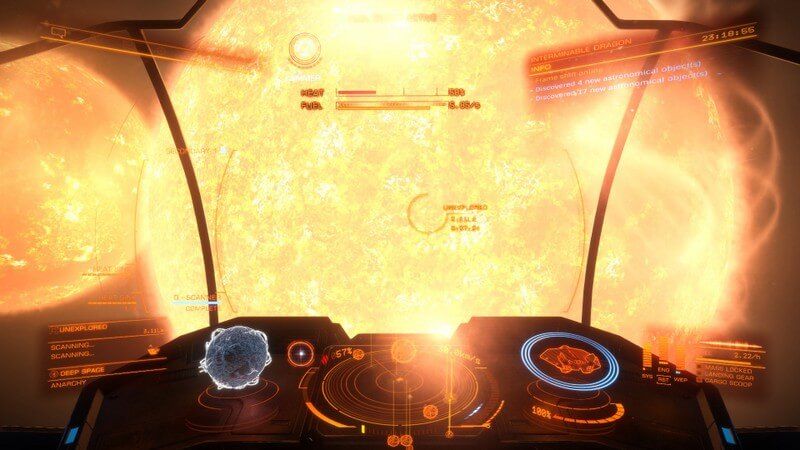 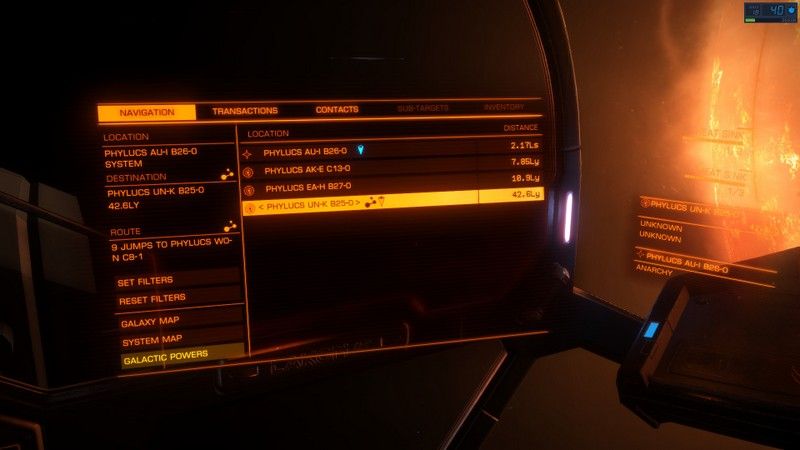 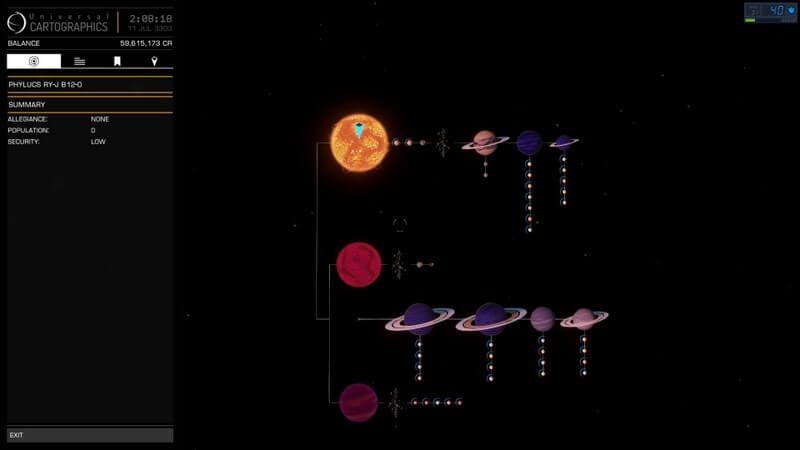 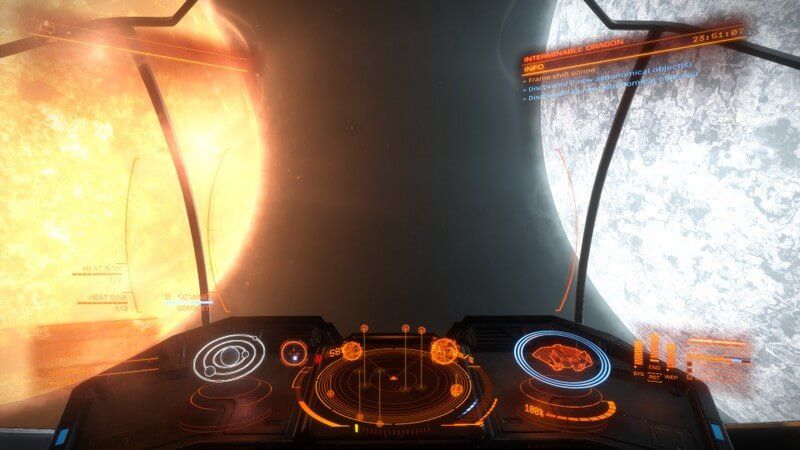 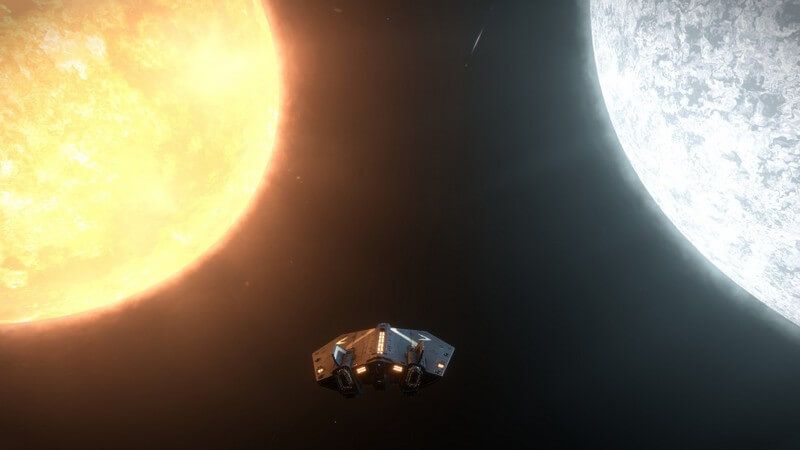 I even discovered some stars and systems and got my name on them as First Discovered, the Coalsack Nebula is close to the bubble and has some good earnings for scanning the systems there. 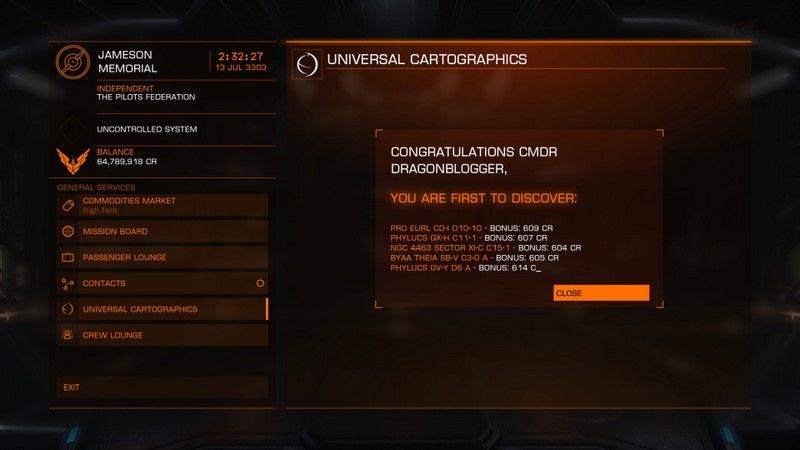 Tempest Dragon is my pride and joy I convert her to run passenger missions, cargo missions, do mining operations or simply go bounty hunting or compete in combat zones as needed with her.  Every single module is engineered to grade 4 or higher except the thrusters on this ship.  She has a 22ly jump range fully laden with 196 cargo and she has all engineered burst lasers with Scramble Spectrum and and 1 multi cannon with corrosive shell. 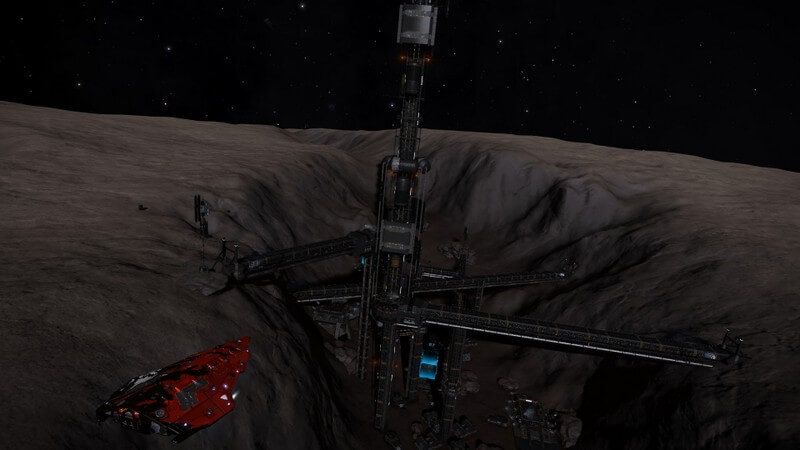 She can fly anywhere, park anywhere and runs great I also use her to scan systems that are in the bubble and not explored by me but I haven’t taken her more than 200ly away from starting system yet.  She is also the only ship I purchased a paint pack for and weapon fire colors and engine colors.  This ship has over 200 million CR in value with all parts and a nearly 13 mil rebuy. 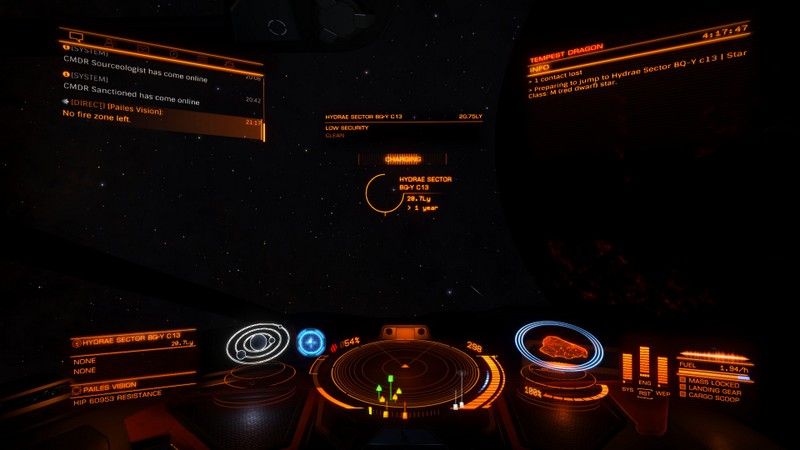 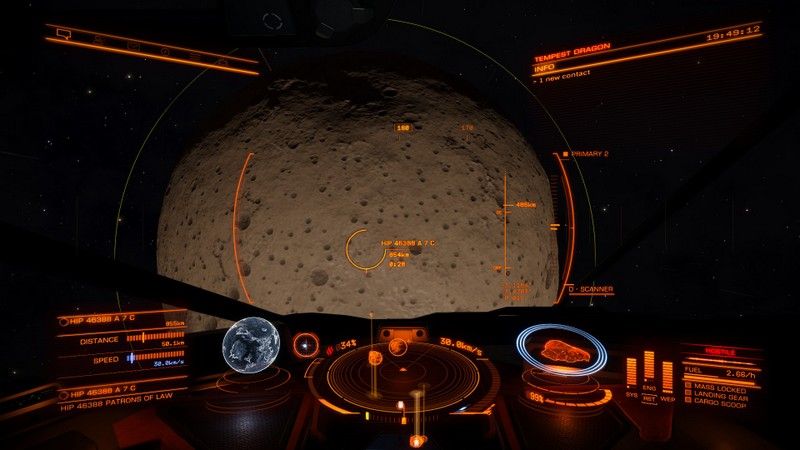 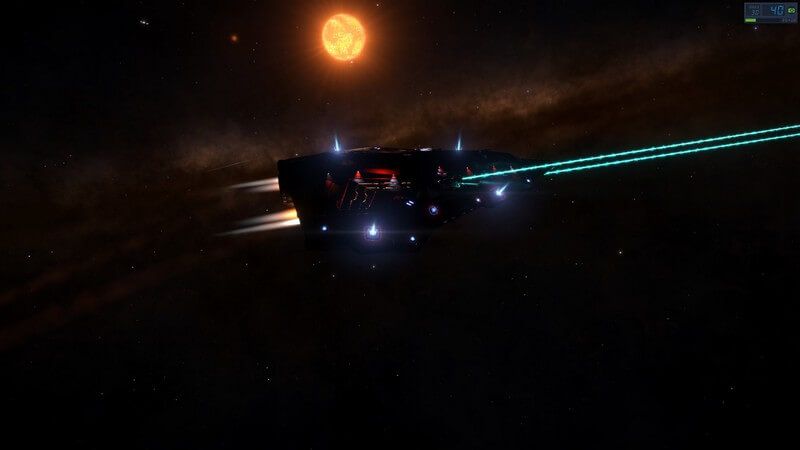 If I had a single favorite ship in the game out of the few I have played which include Sidewinder, Adder, Hauler, Viper Mk 3, Viper Mk 4, Eagle, Cobra Mk 3, Keelback, Type 6 Transport, Federal Dropship, Python and Type-9 I would say the Python is my favorite all around ship so far in the game.  It is just so perfect for multi-purpose and doesn’t have the hindrances of only landing in Large Pads.

I was grinding my way to an Anaconda because my son wants to crew up with me and be a fighter, the Keelback was too small and I didn’t have the rank for a Federal Gunship, so I bought a Type-9 figuring I could run huge cargo runs and grind my way to an Anaconda while earning some trade rank in the process.  This ship is a beast, it is heavy, slow, and can barely spin, it handles betterw with flight assist off in combat but I have all turrets with 2 size 1 beam lasers and the rest burst lasers with scramble spectrum.  I have weak shields (3A) and a Shield Cell Bank but mostly I rely on my fighter and my turrets to defend me, and if my shields start to go, I try to escape., 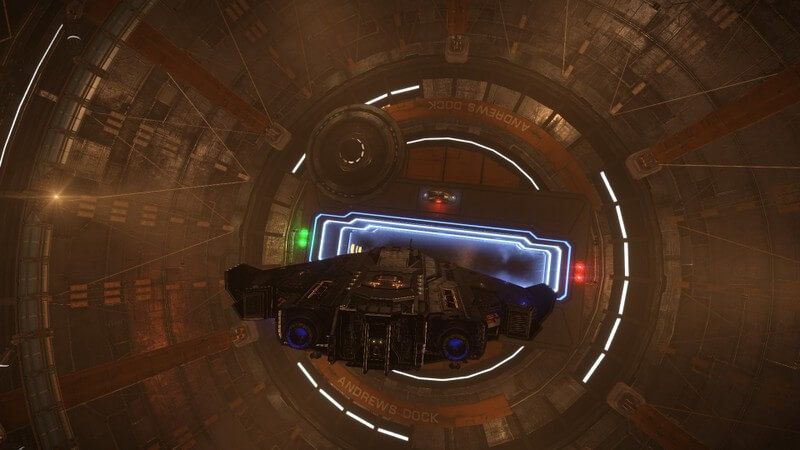 Occasionally I have been known to use a docking computer with my Python and Asp Explorer to save time so that I can grab a drink or check items on the EDDB.IO for trade routes and such, but the Type-9 is so risky and so large a docking computer will only get you killed.  In fact my 3rd jump with the ship heading into a Coriolis space port and my Type 9 got stuck in the entrance, an NPC Beluga Liner wedged up behind me and I was jammed and immediately incurred infractions and became wanted. 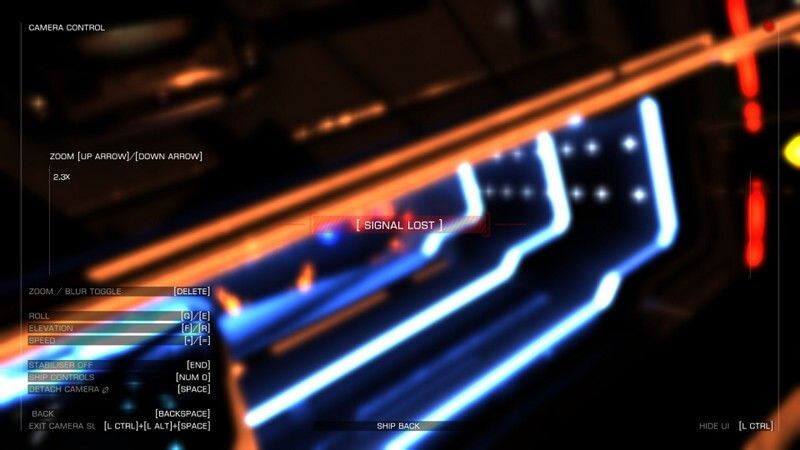 In less than 60 seconds the station shot me down, I had no time to dislodge myself and some other players said I should have logged off immediately when I got stuck but I didn’t think about it.  9 million credit rebuy and my lesson was learned.  Always aim very low in the docking station slot, your cockpit is on the lower part of your ship.

Now the fighter bay thing is quite fun with the Type-9 and deploying my son in a fighter to assist me when I get interdicted leads to some fun moments and exciting thrills. 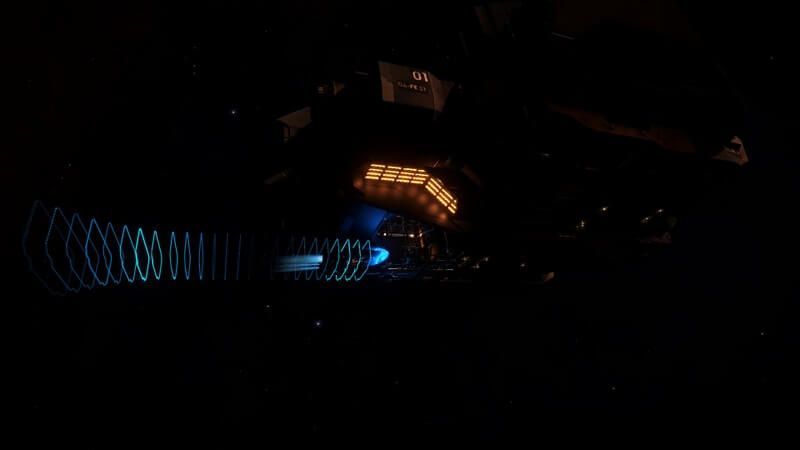 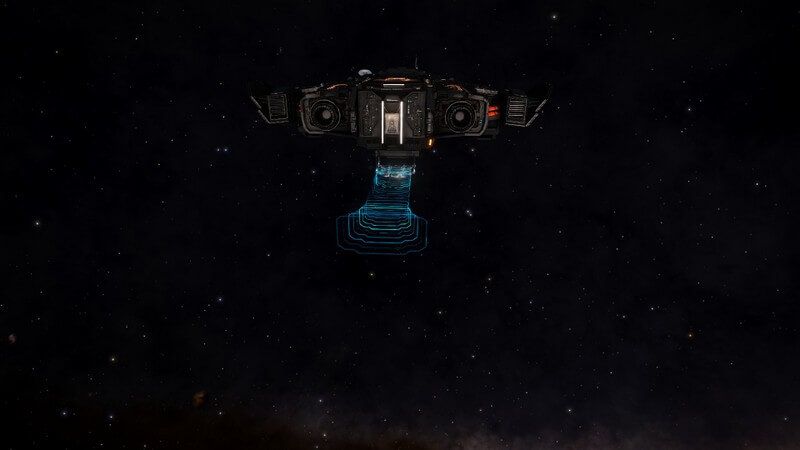 He even enjoys piloting himself back into the fighter hangar bay every time after combat. 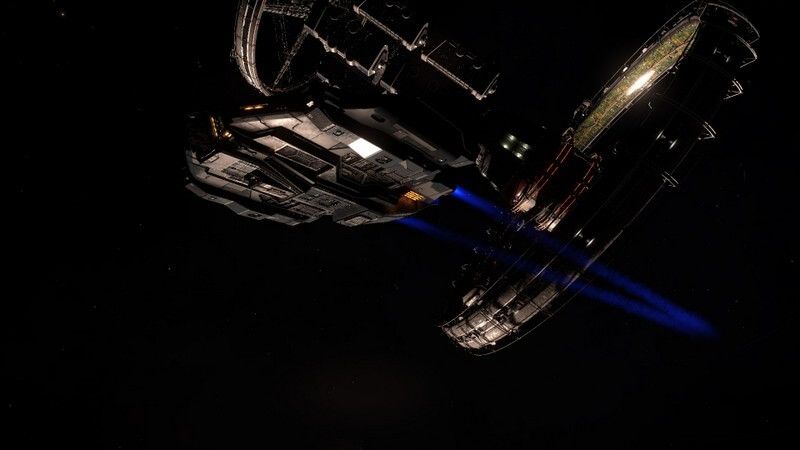 My Type-9 is slow, but has 408 cargo space and I use it to run large trades where my son can earn wing bounty and the extra % I get from being a higher rank in Power Play with Alliance means I can boost credits fairly quickly but not quick enough, I need to find a more profitable trade route than 750,000 credits for a one way jump still.  I like the blue engines on the Type-9 and something is just fun about flying it’s bulkiness, but I had 2 major incidents, one was with a planet with 1.39G and the gravity just yanked me down toward the surface so fast and I couldn’t thruster enough to not smash into the ground and suffer 80% hull damage (but no explosion).

The other was my mistake in jumping into a DA White Dwarf Star System thinking I may try to get an FSD Boost and Overdrive my Frame Shift Drive to get an extra 50% ly jump distance.  This ended in spectacular failure.  I was yanked out of supercruise almost immediately, caught in the plasma stream and unable to even turn or boost away, my systems melted and were all at 0% within seconds and my canopy blew out.  Rebooting and my systems would fry within seconds of the 1-2% health recovery, plus no matter what I did, I couldn’t keep my Type-9 facing away from the DA White Dwarf so it can jump, it just had no maneuverability. 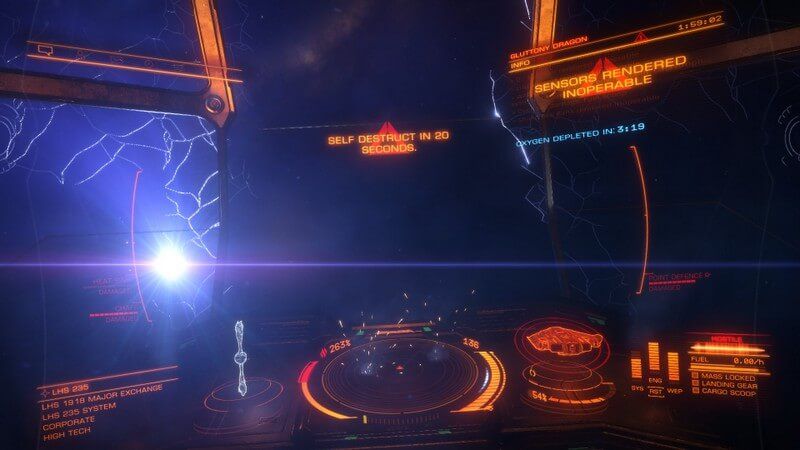 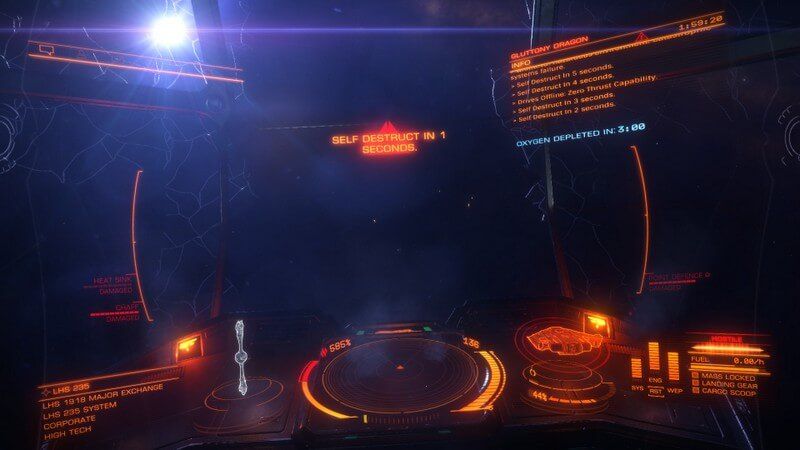 In the end I self destructed leaving my guts behind and 408 tons of cargo spewed out into the vicinity of a DA White Dwarf, but it was a lesson learned and one of the few panic moments that I had in the game when not in combat.  Elite: Dangerous is a game where you make your own adventures and journey, there is community campaigns, Thargoids are coming but I treat it like a true RP and role play into my character, each system has a government and I pick a side, raise rank and support the causes.  I tend to only do missions for democratic factions and rarely ever do missions for anarchists, dictators and communist governments as a matter of principle.  My pilot has been known to run a spy mission, perform some illegal smuggling and even run an assassination here and there if he thinks the cause is just (and the money is good).

This is one of my tales from Elite: Dangerous a game of 400 billion systems to explore, and a galaxy of possibilities.