Developed by Valve, the creators of the immensly popular Steam, this FPS has the most addictive gameplay for an online game. You can choose to be one of the classes from a total of 9 classes, each class has it’s own special skills. It is the most played game in Steam next to Counter-strike, the most insane thing about this is the fact that it is completely free to play, all you need to do is install steam. The game is also available for your Mac, with Linux support underway. 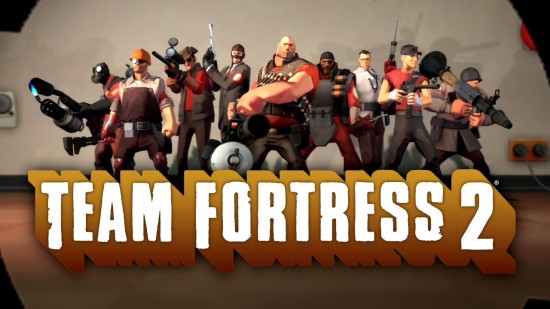 The only way to play the game is through Steam, an software created by Valve that makes it super easy for you to buy and play games. After installing Steam, navigate to Team Fortress 2’s official page and click play game. This will open up Steam and it will download the game from the server nearest to you. The game is 10.146 GB, so it will take a while to download, heck it is worth it. Steam automatically downloads it in the background, and also continues automatically after a shutdown.

It has an really good collection of maps, weapons, hats with a lot of weapons and maps made by the community through Steam Workshop. Unlike EA, Valve loves mods and you can play with any mod you like. There are 9 classes, each having it’s on pros and cons and there are also different game modes such as King of Hill, Control Point, Payload race, Intelligence capture etc, if you are a beginner, stick with Control Points, they are a lot easier to play and easy to understand. I will show you about the different classes and what they are good at.

The fastest character of Team Fortress 2 with an Scatter Gun that can kill almost all classes with two shots. The Scout is like a cat, it is recommended for fast moving players with good reflexes, you will need to learn to dodge bazookas and sentry guns!

The soldier has an bazooka that is capable of taking out targets that are long away, he is capable of rocket jumping and thereby scaling places unreachable to other classes, having an average speed, he has upgradable bazookas that make him an killing machine.

The Pyro has an awesome flamethrower that sets the enemy on fire, lethal at close ranges. Pyro is useful for storming into a area filled with unsuspecting players and setting them on fire. The Pyro is also the best class for detecting clocked spy by setting them on fire. It is one of the more powerful classes, that can turn the tide of the game.

This guy is a long range attacker, he fires grenades and sticky bombs(they rock), he is an invaluable assest in taking down a group of enemy’s or bringing down a control point, also he has great melee weapons.

The enormous guy with the best health of all classes, and an enormous  minigun. The minigun weighs one hundred fifty kilograms and fires two hundred dollar, custom-tooled cartridges at ten thousand rounds per minute. Now that’s a gun you want, uber an heavy and the sentry’s are all washed away!

The engineer is capable of building sentrys, dispensers, teleporters. The spy is the engineer’s greatest enemy, he is capable of destroying everything you have using his sapper, so watch out! A level 3 sentry at strategic locations can easily take out enemys before they know that they are being fired upon.

The medic can heal injured team mates with his medigun, deploy an ubercharge, which causes you to be invulnerable to damage for a short time. For killing enemies at a close distance, you have an syringe gun and bonesaw as an melee weapon.

A long range shooter, who can kill enemy’s in a single shot to the head, for advanced players who have no lag(:P). He has an Sub-machine gun to tackle close range threats. He is not to be messed with, expert snipers are hard to kill, and you will end up getting dominated by them.

He is the invisible, cloaking guy, who picks on lone engineers and sentrys. He can disguise as an team mate and backstab you or shoot you in the head. He has the least health of all classes, an meagre 90. The pyro is his worst enemy as he can detect cloaked spys easily, this is the class for those who like stealth.

The game is insanely customisable, there are a lot of community weapons and maps. The game itself can also be modded, there are several custom HUD’s for the game and also scripts for training to rocket jump/sticky jump in offline mode. Also Valve adds new weapons, hats and several other stuff to the game from the Steam Workshop.

You can trade stuff with other Team Fortress 2 players using Steam, it allows you to exchange weapons among friends. Please note that you need to be a premium member to trade, buy something from the Mann Co.Store and you get an Team Fortress and Steam premium account, buying through steam is  safe and secure.

An awesome game that can be played for free, it has better graphics that counter-strike, and has an enormous userbase. It works well on older computers with an integrated graphics card. This game has an addictive multiplayer and that makes this game so successful. So what are you waiting for try Team Fortress 2 and post a comment on how awesome it is!