Today on the test bench, we have a very flashy and sleek looking RAM for review. Today we are discussing the TeamGroup T-Force Vulcan DDR4 RAM. The Vulcan is the name of the product and T-Force is a new lineup from TeamGroup. T-Force Series by TeamGroup consists of DDR4 memory modules and SSDs and are focused towards the gaming and overclocking enthusiast market.
The sample we received from their T-Force Lineup is the Vulcan DDR4 16GB 3000MHz CL16 RAM. The Vulcan RAM is the only low profile RAM in the T-Force line-up and features an asymmetrical aluminum heat spreader. The aggressive look of the RAM really stands out. 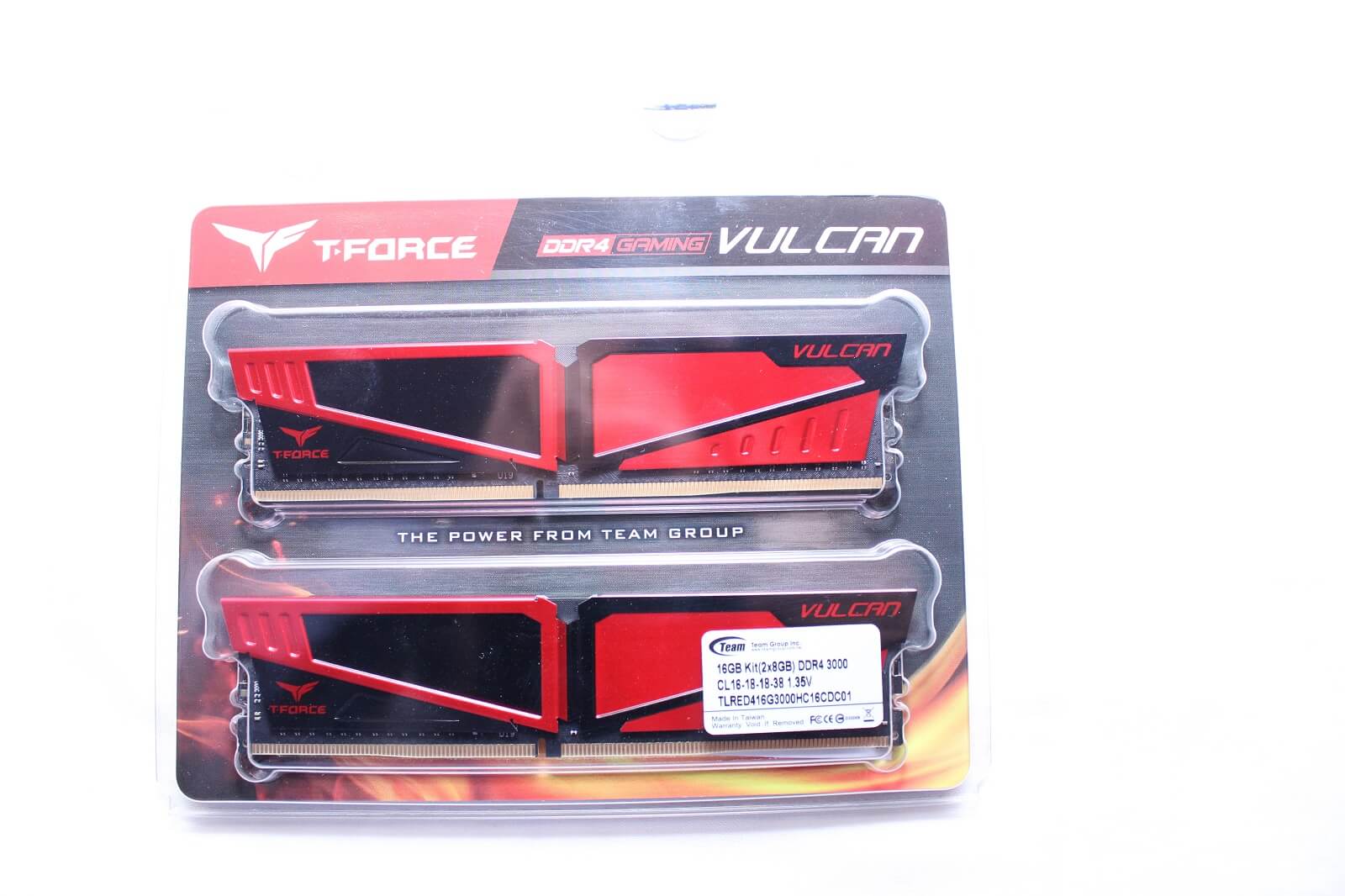 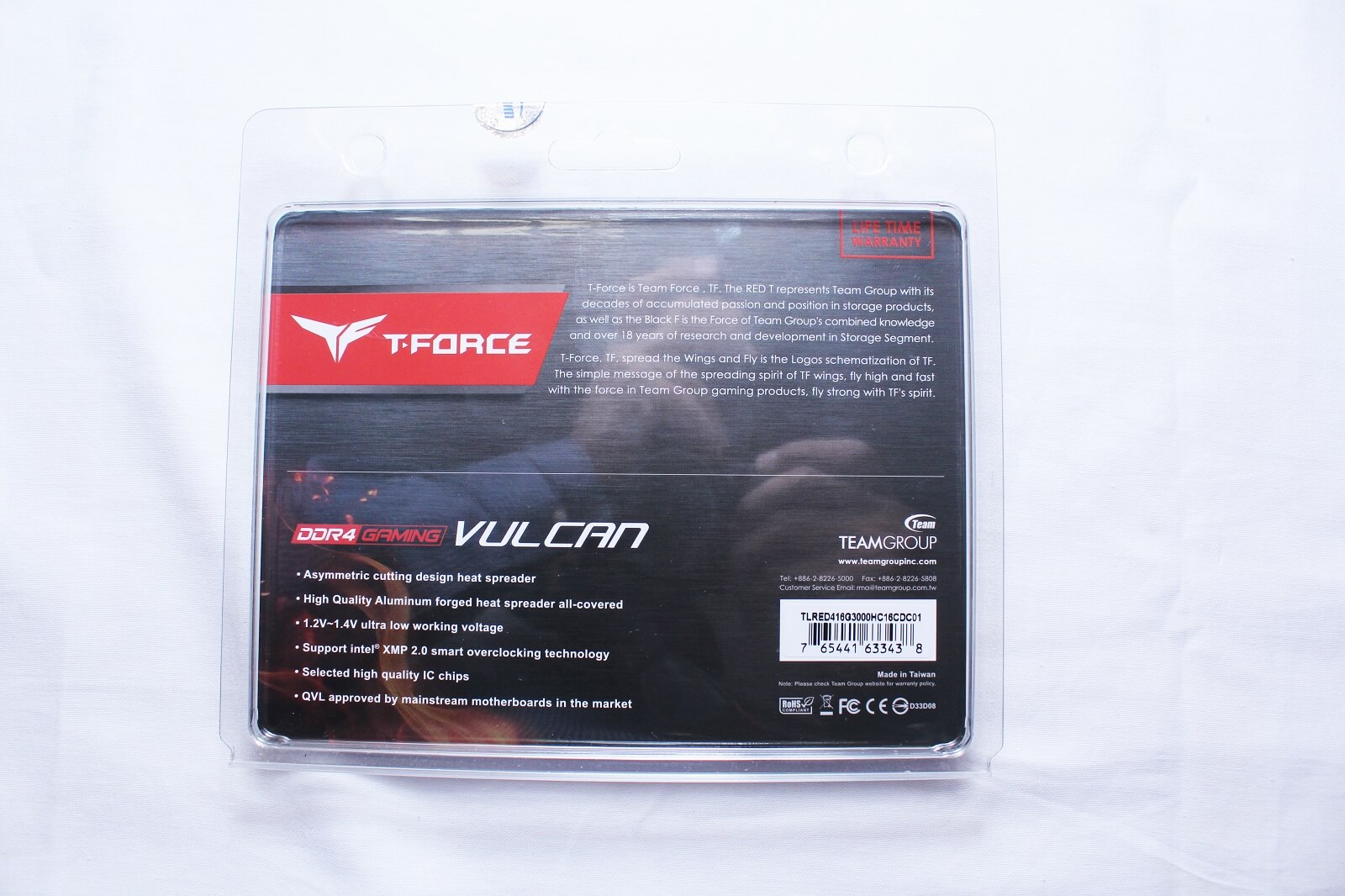 Nothing fancy on the back. Just an introduction of the T-Force and some features of the Vulcan RAM. 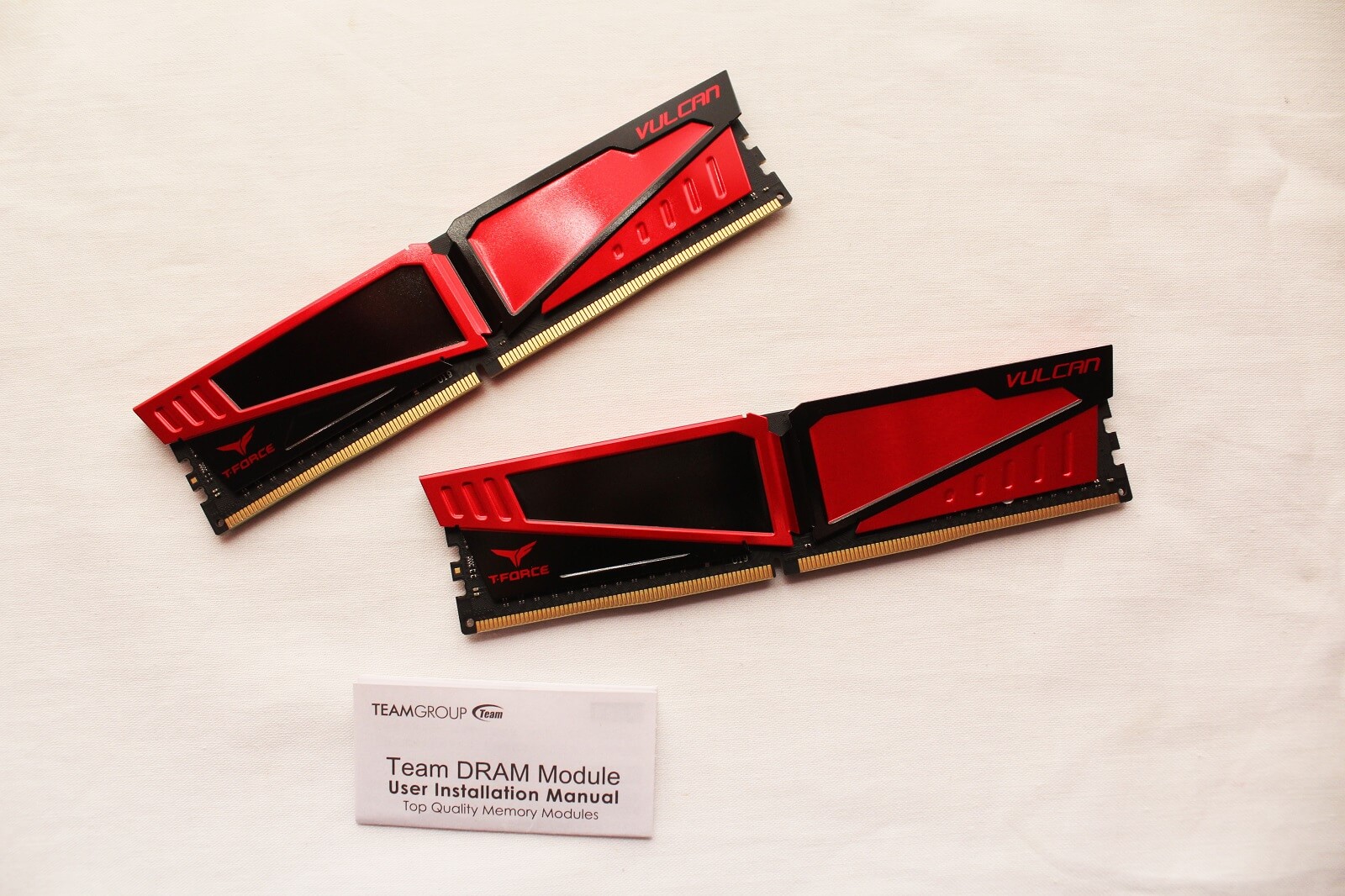 Once you take the RAM out of the box, you will come across a warranty policy booklet along with the RAM. The T-Force Vulcan comes with a life-time warranty. So with TeamGroup’s back, your RAM is going to outlast your numbers of system upgrades. 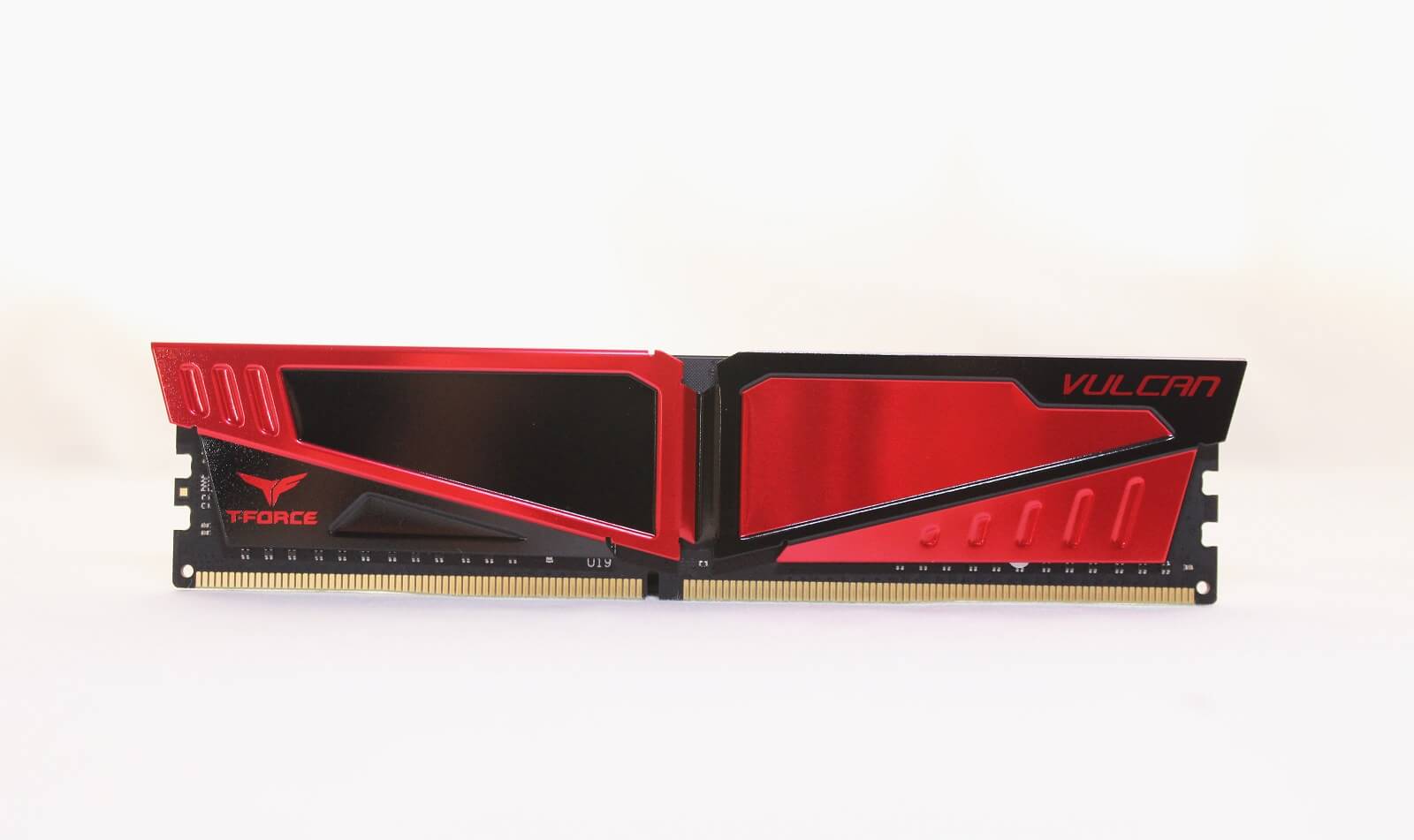 When you take out the RAM, and feel the Aluminum heat spreader and look at the design, you know you’re holding art in your hand. The asymmetric design is a pleasing view with inverted color separated from between. And on one side we have Vulcan and on other side T-Force logo in a beautiful red-black accent. Also, yes, this is a low-profile RAM, so you won’t have any trouble with most of the standard sized CPU coolers in the market. 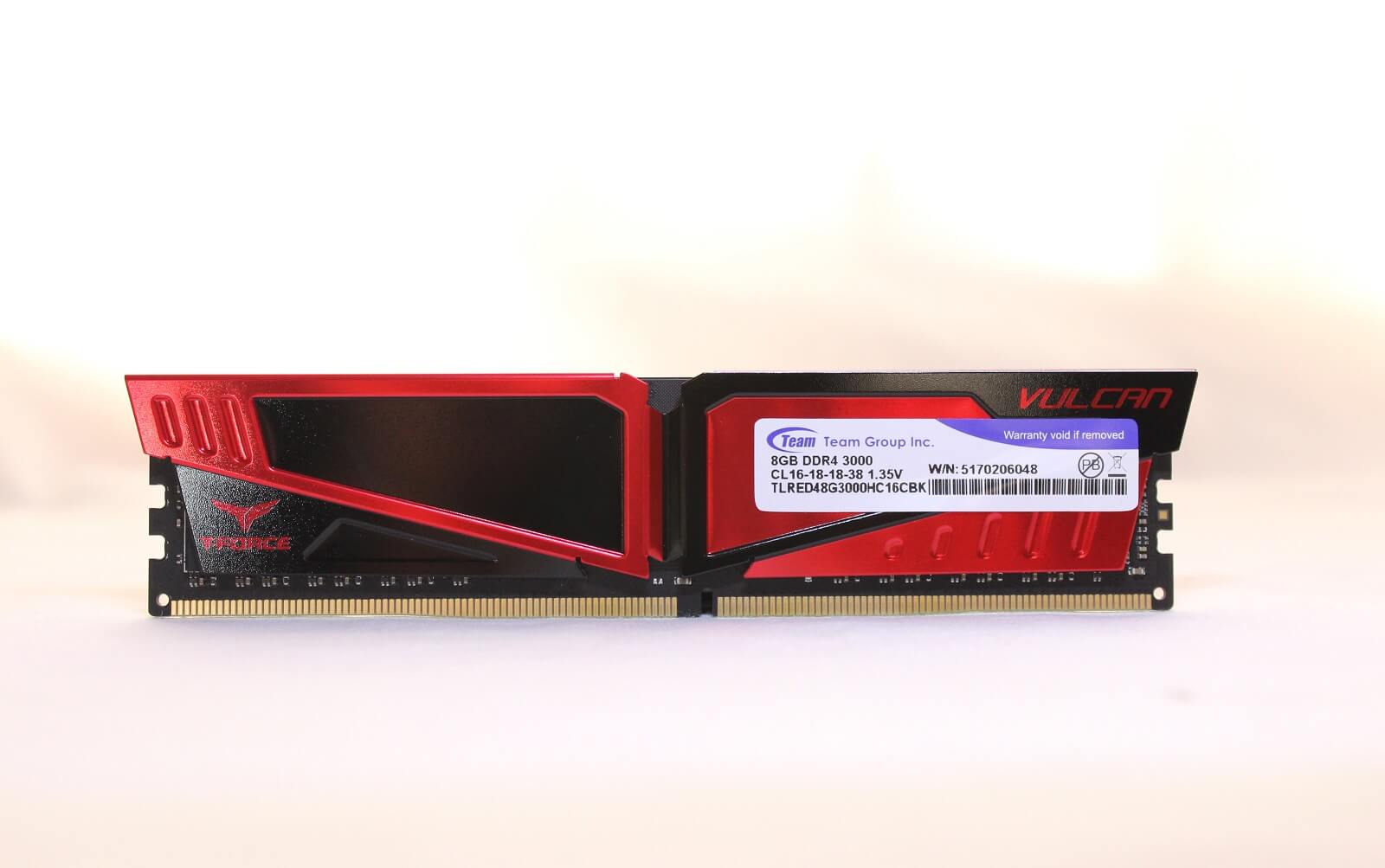 Same design on the back, but just with the information sticker attached. On the information label, we can see the capacity per stick, MHz, CL timing, voltage, W/N and the model number. 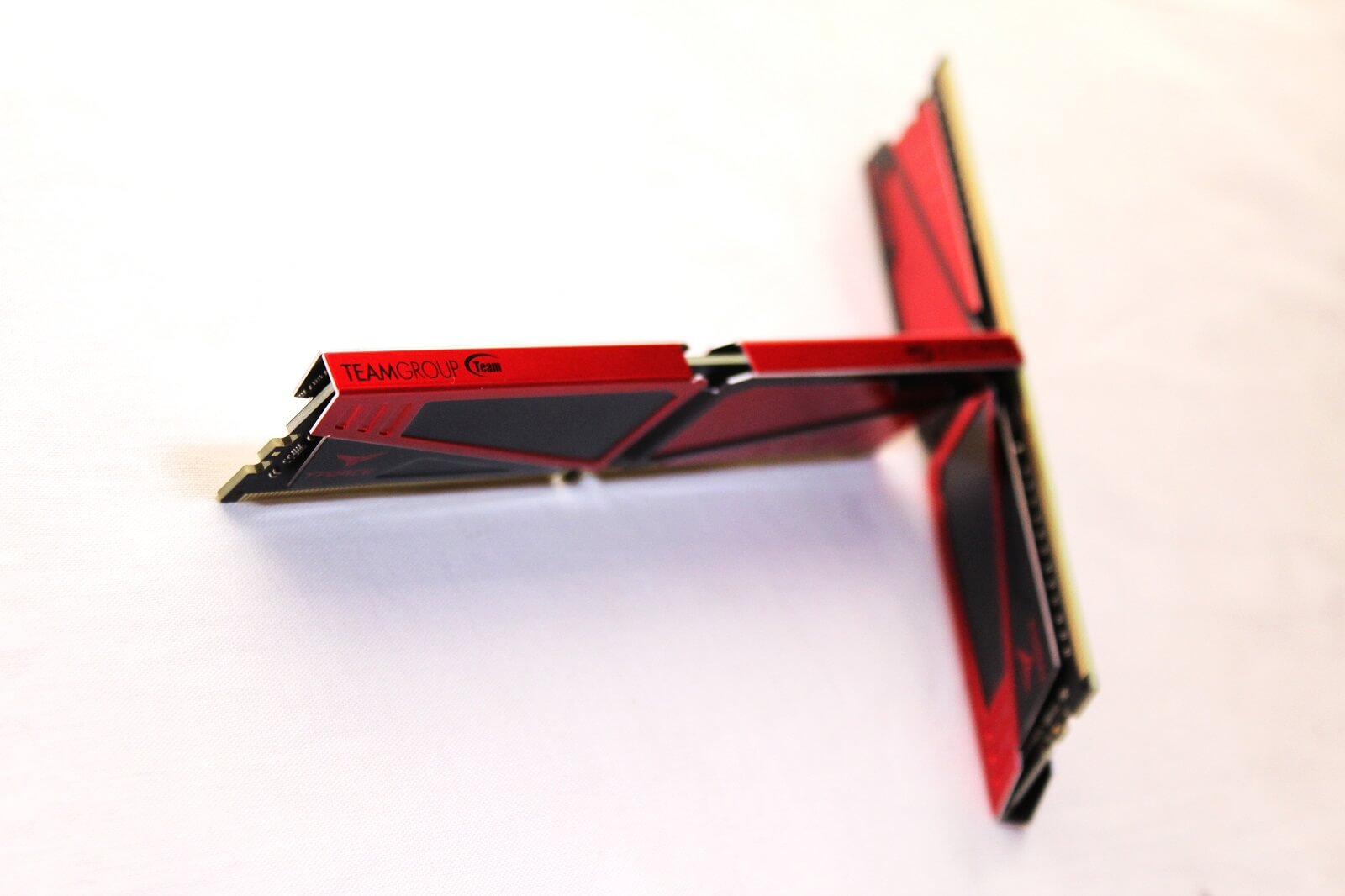 And on the top, we have TeamGroup and their logo on both ends. Also, if you notice, there’s a silver line on both sides on half of the top. These lines represent a cut on the top, they are not a single piece, and that silver line is not graphics. So yes, you can pull the head spreader from the top and end up bending the heat spreader. This is a huge off for the people who have many occasions where they have to handle the RAM physically. But for overclockers, this might be a good thing as they won’t really need any tool to remove the heat spreader from the RAM so they can install their cooling solutions on the RAM. Just pry it off, and you’re good, but then, it means they won’t be able to re-install the heat spreader back because it would be too bent. I would rather see a heat spreader with screws which makes it easier for using in later occasions.

Some more pictures for eye candy: 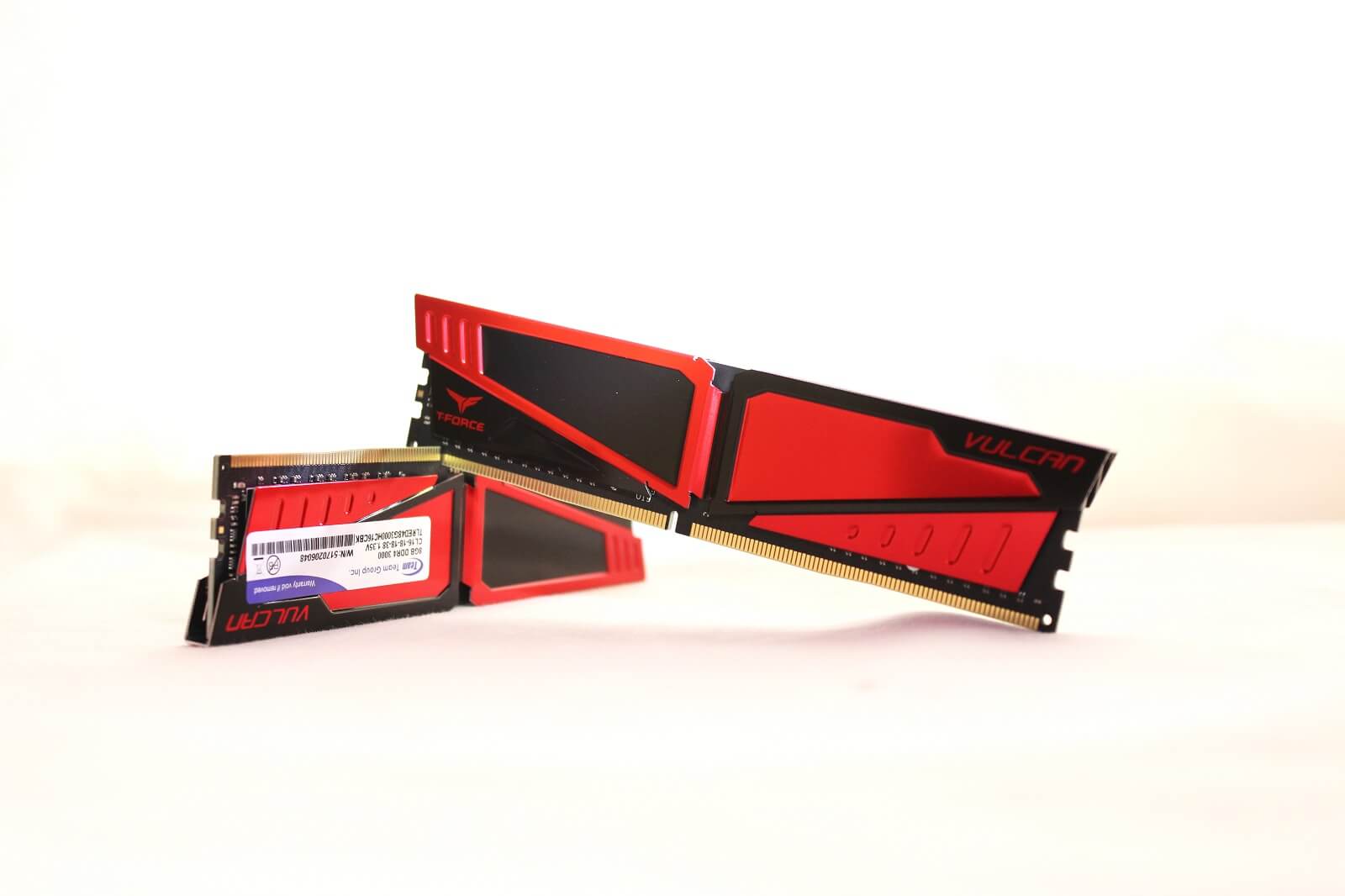 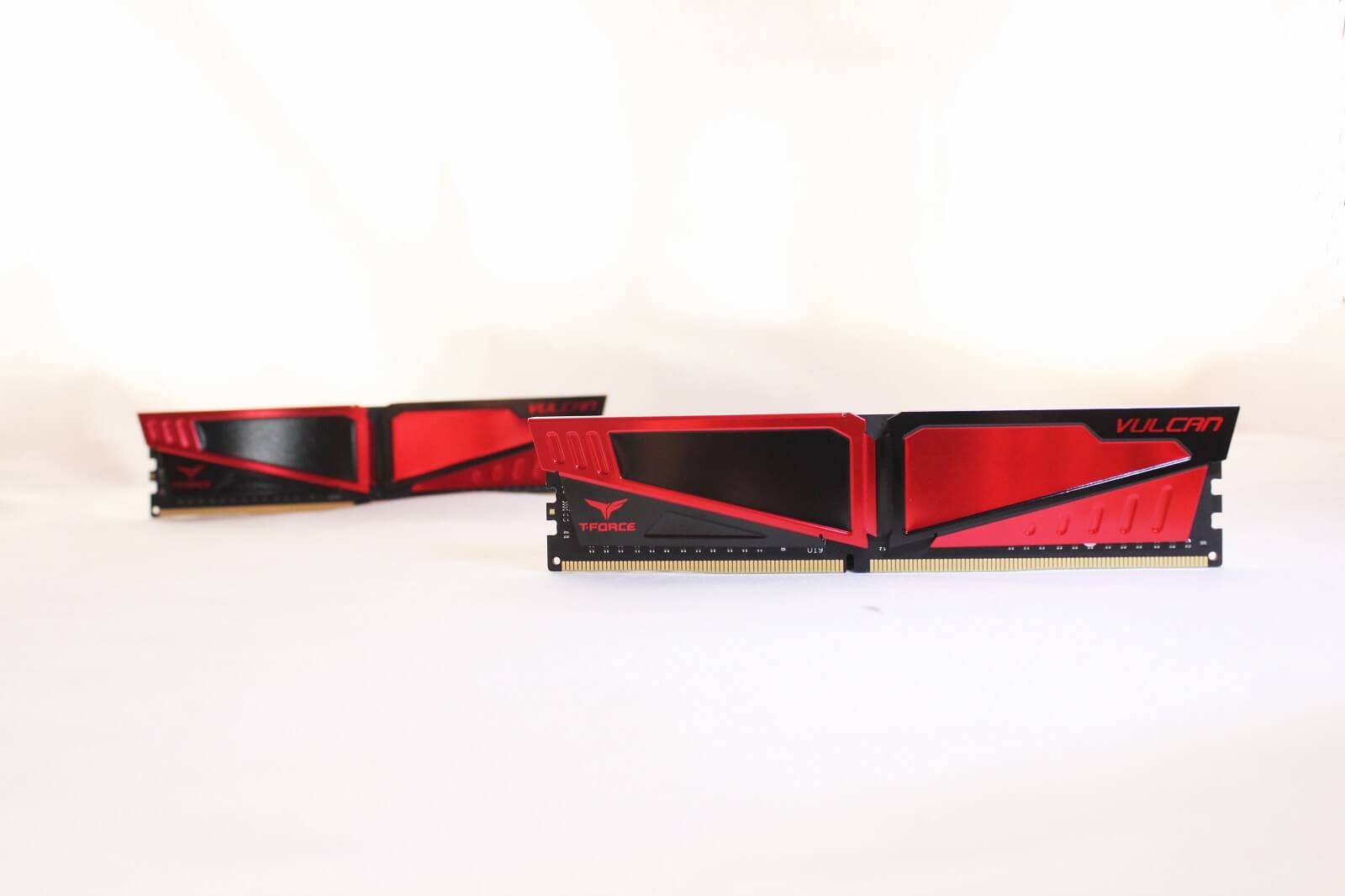 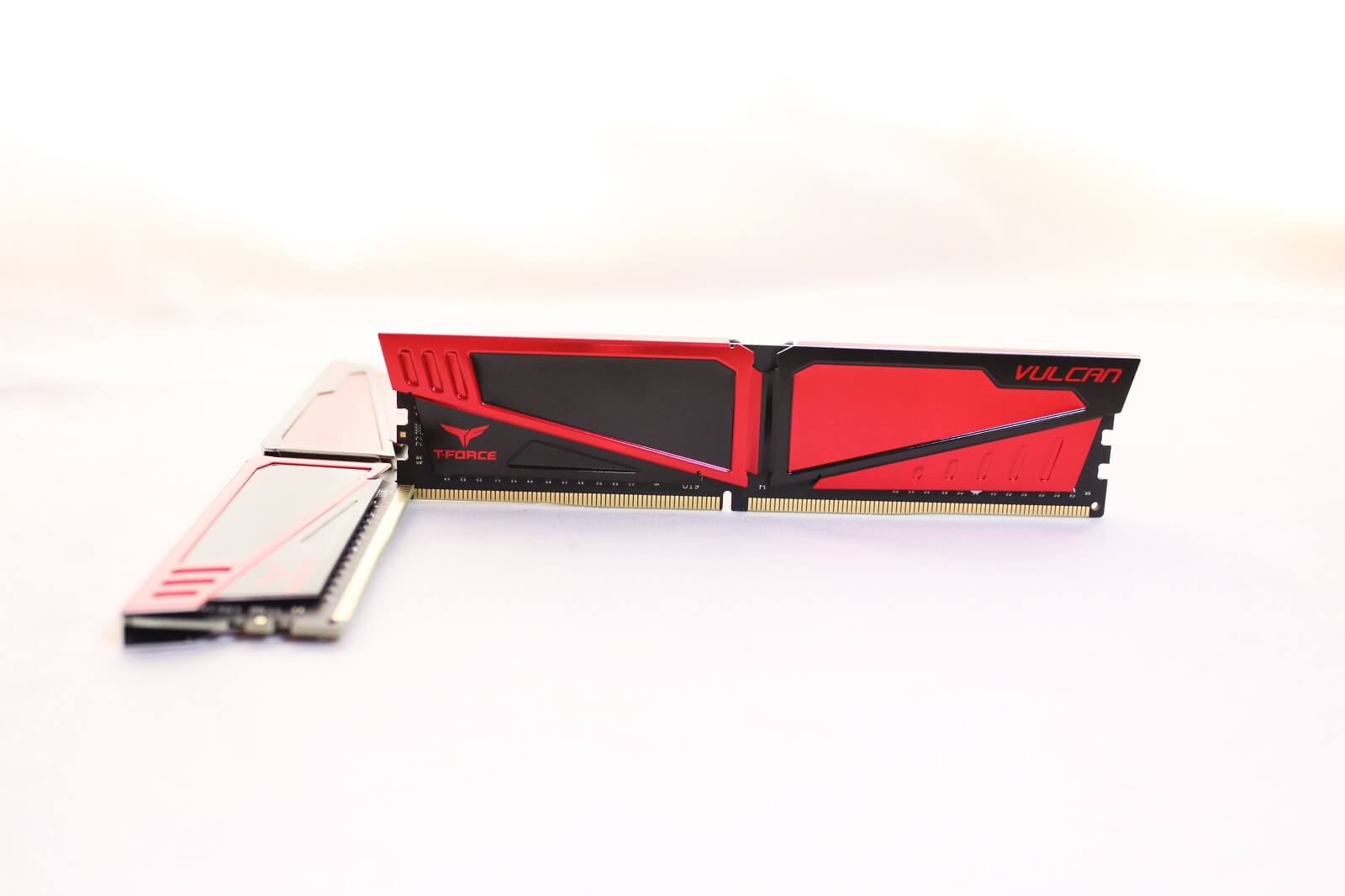 So first, the RAM will be tested with various benchmark softwares on the stock speed of 3000MHz at CL16 at 1.35 volts. These softwares include Aida64 Extreme Edition, MaxxMem, SuperPi 1.5, WinRAR Benchmark and PassMmark PerformanceTest 8. Then the RAM will be tested for overclocking capability. And if we can push the MHz higher, then after achieving the sweet spot of lowest voltage and CL timing, stress tests will be ran, and then the same benchmark software would be ran again. 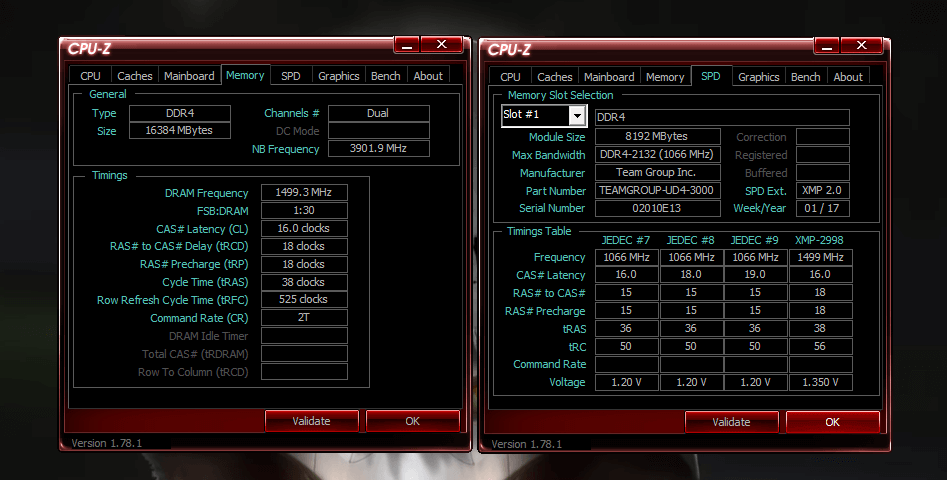 The system booted without any issues once we installed the RAM. Also, we were running on the rated speed directly as we had XMP profile enabled. Then we ran some stress testing to ensure that the RAM is working fine.

In the Aida64 Cache and Memory Benchmark, the Vulcan fall behind the almost same spec Apacer Blade RAM. But the lead is not too wide, it’s only behind by a few MB/s.

And as was expected, the latency is also a little higher than the competitor in the chart.

In the MaxxMEM benchmak, the T-Force Vulcan was able to take the lead in the writing speed, but it fall behind the the other Apacer Blade in other two sectors.

While the difference in the latency reading in the Aida64 benchmark is 1.5ns, here iti’s 1.4ns.

In PerformanceTest 8, the T-Force Vulcan falls behind about 350MB/s.

But in WinRAR benchmark, we see the Vulcan T-Force lacking behind with a difference margin of 300KB/s. 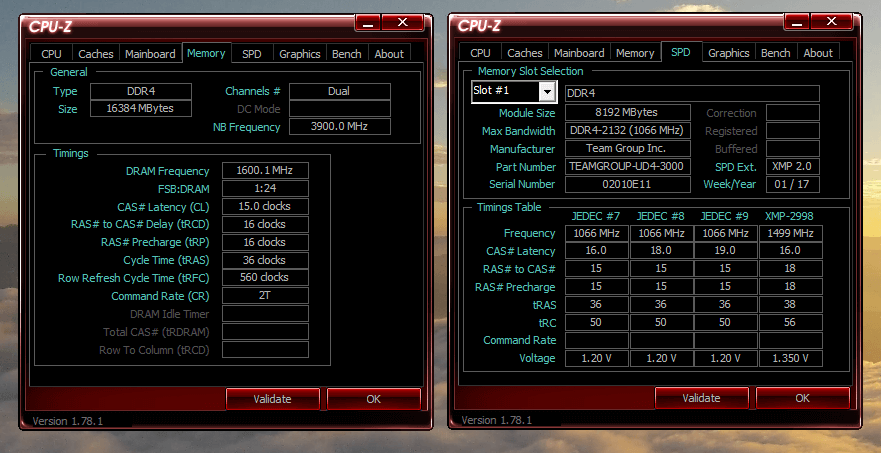 This RAM played some games with my mind, but I was able to settle at a stable 3200MHz overclock at 1.4v on 15-16-16-38-2CR timings. And by games, I meant when I was testing the RAM for overclocking capability, and I started decreasing the voltage, I was able to boot at 1.23v at 3200MHz and was able to use the system without any issues for a few minutes (no stress test was run). What’s odder about this situation was that I couldn’t even get the RAM to work at 3333MHz at 1.45v. So the decreasing voltage headroom for 3200MHz just didn’t felt right. Assuming something’s wrong, I stopped the overclocking test right there. This has probably to do with the model of the motherboard, nothing’s wrong with the RAM.

Then the next day, when I decided to give it another go and started with stress testing, I started seeing BSODs very early till 1.32v. Then a little higher up, the XTU would crash the system till 1.36v. A little higher and I would get hardware failure errors in the Aida64 Stress test. And finally, after stress testing the RAM at 3200MHz at 15-16-16-38-2T at 1.4v, I was certain that this is the sweet spot for overclocking.

Once that was achieved, I tried 3333MHz again, but the system wouldn’t boot even at 1.45v, so I stopped there. A higher overclock might be still possible with the RAM if I were to play with the base clock of my CPU. And of course, overclocking headroom varies from stick to stick even if they’re from the same batch, so you might get different performance from your purchase.

Same scenario in MaxxMEM benchmark results. T-Force Vulcan was able to beat the Blade at stock, but still falling short to beat the overclocked Blade RAM in sectors other than writing speed.

Surprisingly, the Blade came out in top in the MaxxMEM latency benchmark, but the difference isn’t too wide.

Whereas we saw the Vulcan falling behind in this benchmark by 1 second, once overclocked, the T-Force Vulcan came out in the top also by 1 second.

While the T-Force Vulcan was able to shorten the lead in the overclocked battleground in the WinRAR benchmark test.

The TeamGroup T-Force Vulcan is for sure a wonderful RAM with great performance and aesthetic value. It gave the RAM with same specification a head to head battle without falling too much behind in the tests. The low-profile design makes it compatible with most of the CPU coolers in the market today. And it would fit perfectly with the MSI’s and Gigabyte’s Gaming, AsRock’s Fatality, and Asus’ Maximus series motherboard. But the top of the heat spreader is a gamble that might not end up well in situations like RAM handling and CPU cooler installation where the RAM heat spreader can be damaged.

Coming down to overclocking, there’s not much headroom as we’re already running at a very high frequency of 3000MHz at 1.35v. Compared to our previous RAM review which was running at the same frequency and voltage but different timings and was also able to achieve a stable overclock of 3200MHz just by increasing 0.2v, the T-Force Vulcan seems a little weaker in the overclocking sector. But once overclocked, the performance increase could be seen in the tests clearly.

In the end, it all boils down to the price of the product, and the TeamGroup T-Force Vulcan (same kit) is available on Newegg for $119.99. At this price range, this is one of the cheapest memory modules available in the market as of today, other than their own Delta and Dark RAM, which is even cheaper. At this price point and the performance, I would like to rate the TeamGroup T-Force Vulcan 4.5/stars and give it our Best Value award.