Another day, another mouse to test and another review. This time, we’ve got the Sagitta Spectrum H6L 5000DPI Gaming Mouse from one of my favorite company, Tesoro. Once again, they’ve gone with their tradition of opting for a name of something legendary and this time it’s the legendary arrow used by Hercules to kill Aquila; also known as arrow of stars.

Sagitta is one of their latest addition in the mouse category they’ve released after the company went through a refresh. So how does that affect the product quality, let’s check out below.

Ultra ergonomic and incredibly comfortable gaming mouse designed for most genres of games such as FPS, MOBA and RTS. Include states of the art infrared sensor, antimicrobial soft-touch finish and customizable 16.8m RGB color lighting. 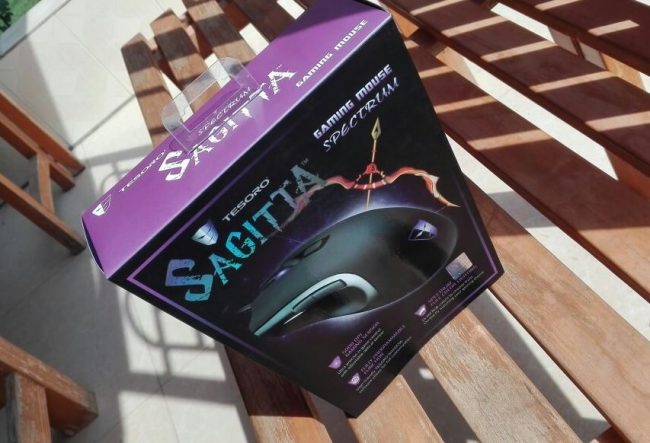 So we get the Tesoro Sagitta in an inverted Trapezium box, colored in their traditional theme purple color. We also have the legendary Sagitta arrow on the front along with three the picture of the mouse and three features of the mouse. 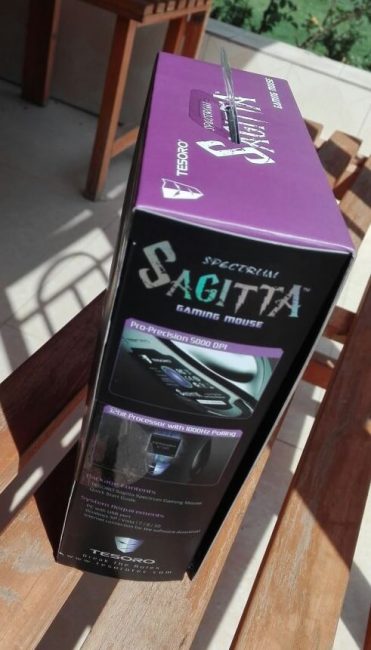 On the left side of the box, we have a picture of the 32bit processor and the 5000DPI sensor along with the package content and system requirements. 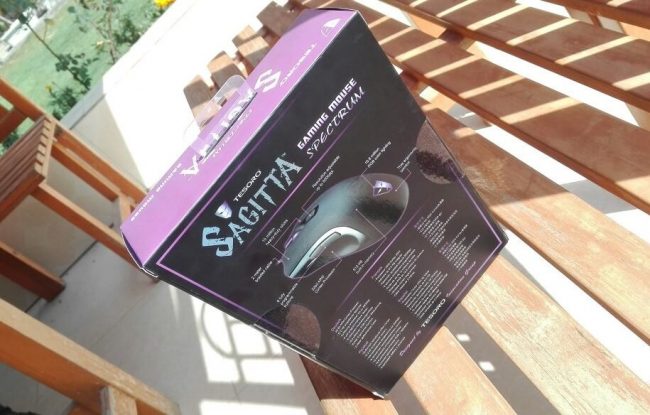 On the back of the box, we have a picture of Sagitta with its body part labeled with pointers. And at the bottom, we have the specifications of the mouse in 6 different languages. 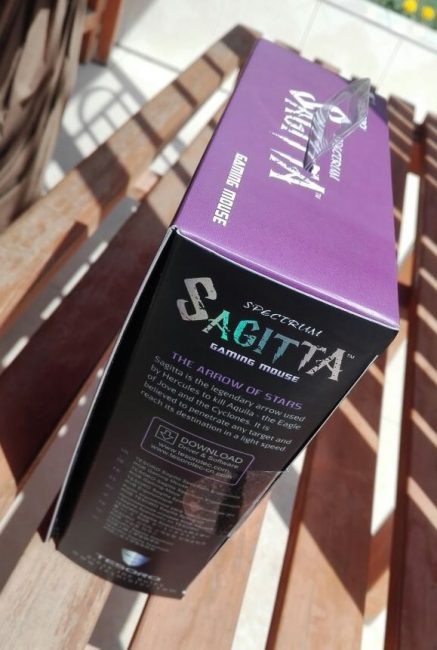 And finally, on the right side of the box, we have a description of the Sagitta, the arrow of stars, and the name of the mouse written in different languages. Also, there’s a mention of where you can download the software from. 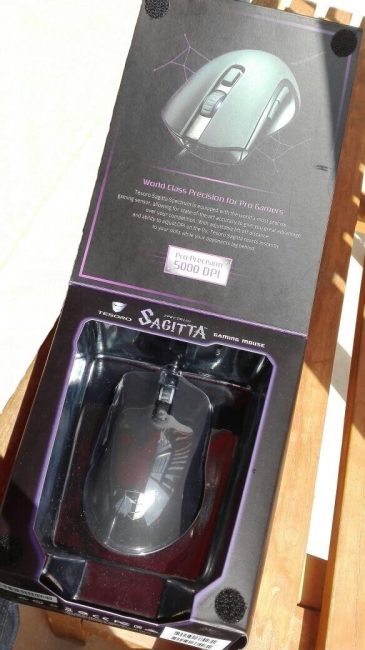 Flipping open the front reveals the mouse inside a plastic container and we also get to see a description of the sensor used in the mouse. 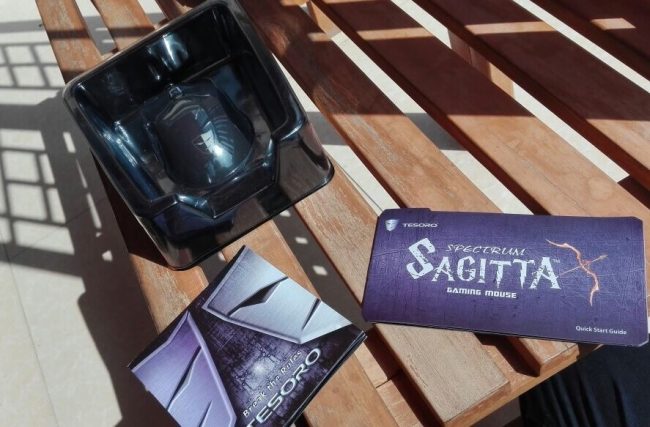 Along with the mouse, we get a quick starter manual and the product catalog of the brand. 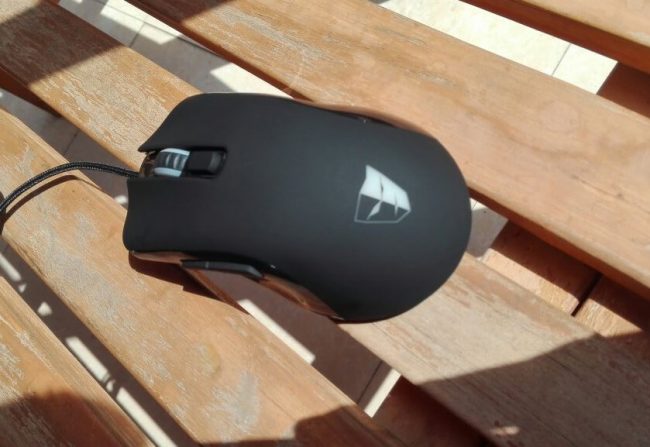 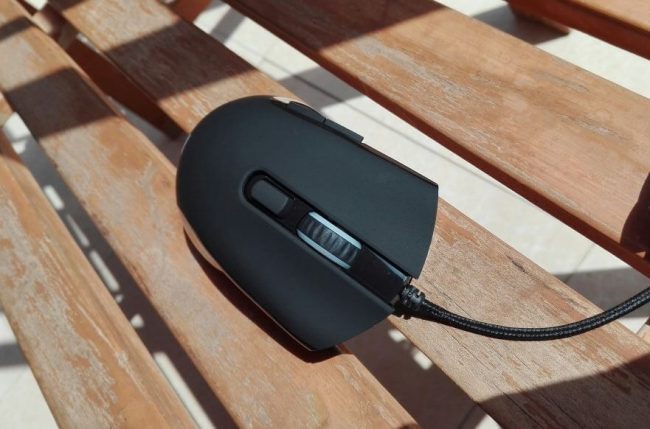 From the front view, we have a better view of the smooth finish of the body, along with the scroll which also has a black and white contrast. There’s also an extra button on the top with a rubberized finish that is used as DPI changer but can be redefined to anything from the software. 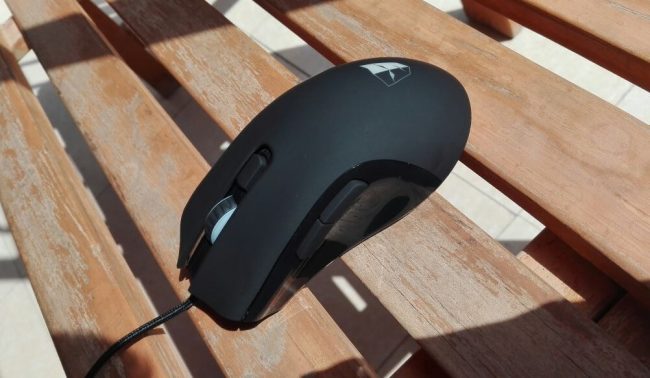 From this view, we can see that the mouse has a gloss finish on the left side for thumb support while the glossy finish also works as a camouflage for the inward push on the mouse for the camera. This is something I think shouldn’t be there for people in warm areas, more on that in build quality section. Other than the gloss finish, we have two extra buttons that are used at forward or backward out of the box but can be redefined as per your need from the software. 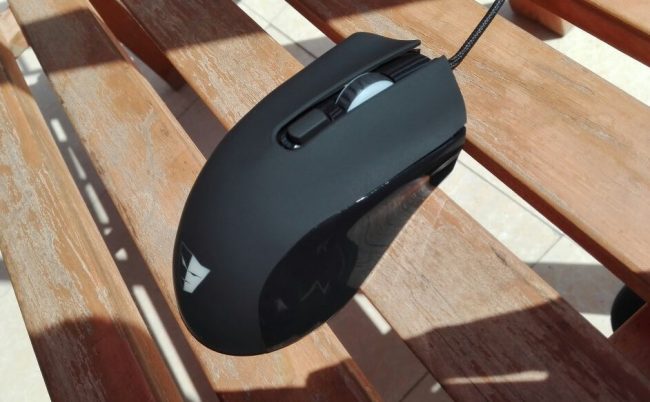 Like any of the mouse, there’s nothing on the right side of the mouse for better grip, but what’s noticeable is the gloss finish and the outward push on the body at the bottom area. 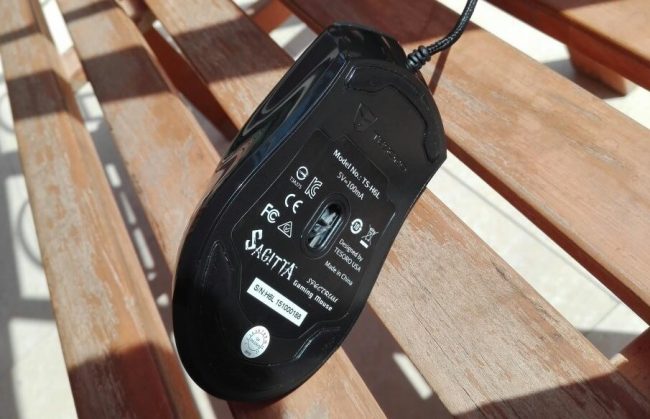 At the base of the mouse, we have two long rubber feet, one at the top and one at the bottom, in their usual places. Then we have the logo of the company carved into the body along with the model number of the mouse and the manufacturing location.

The Tesoro Sagitta feels a little bit too solid, the reason being that they’ve gone with a sturdy plastic design on the left and right side of the mouse where you place your thumb, ring and pinky finger and the body in between has a matte finish. The gloss finish on the either sides of the mouse and the outside push on the bottom right side of the body makes the mouse a little less comfortable for me but is best balanced by the inward push on the left side. The design on the right side isn’t something you’ll call comfy because your pinky finger doesn’t fit inside the contour and is placed above the wave which makes it feel like you’re applying too much pressure with your pinky finger. And secondly, once your hands become sweaty, you’ll have to readjust or even clean the sides of the mouse because of the of the gloss finish, which makes it less comfortable for long gaming sessions. A better way would’ve been making the left side of the mouse having a rubberized finish for even better thumb support and having the bottom right side of the mouse pushed inward rather than outward. That might’ve affected the looks but, people don’t usually buy a mouse for the looks. This all concerning that my hands seem like a teenagers’ and my grip being a claw. Though to some people, the design might be appealing for those who like big mouse or even a flat left side.

Tesoro Sagitta uses Infrared sensor that features up to 5000DPI. When using the mouse, I haven’t noticed any misshape or movement issues, infect the mouse is very accurate and precise. I like the movement of Tesoro Sagitta more than the previous mouse I reviewed, or maybe I just didn’t have the DPI set correctly on that mouse. By default, the mouse acceleration is set on five which you can consider as 0 acceleration, so there’s no disturbance in the ending point of the movement. Sagitta is also using Omron White 10million heavy-duty switches which feel really good and premium. The scroll button feels good as well and it’s not out of control in any way.

The Tesoro Sagitta Spectrum software can be downloaded from their website, and the software is pretty neat and all the options are organized very well. Though there’s one thing that makes looking at the software somewhat bothersome, that’s the tabs and background seems a little pixelated. Anyways, off to the options. 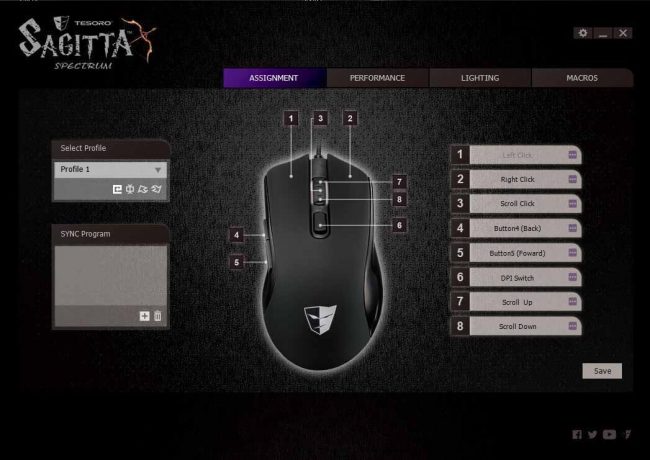 So once you launch the software, you’re taken to the Assignment tab where you can assign the six buttons (8 including scroll up & scroll down) different functions than default like macros for example. You also have a profile tab in this section, and you can store up to 5 different profiles with various settings thanks to the 512Kb onboard memory. We can also sync the profiles to programs, just like the Tesoro Excalibur Spectrum. 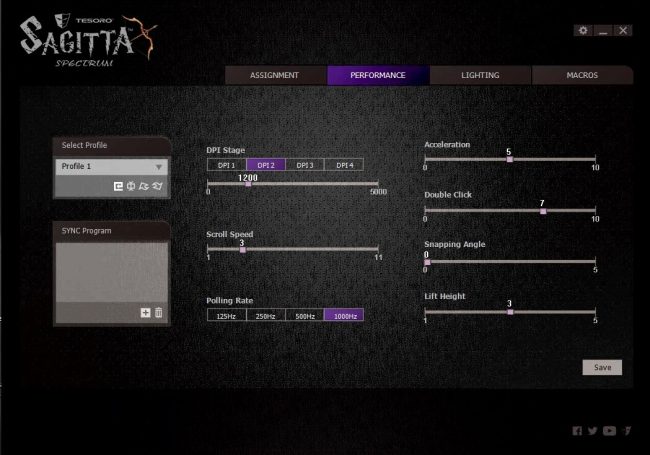 In the performance tab, we have the sensor settings where you can set up to 4 different levels of DPIs to be used in one profile. You can also change the polling rate from 125-1000MHz. By default, the acceleration of the mouse is set on five which should be considered as zero. Going above or below impacts the DPI in +ve and -ve acceleration. You can also adjust the scroll and double click speed, angle snapping and lift height from this tab, while the lift height isn’t very high even at max. The DPI settings are changed at the moment you click on the DPI stages while the other settings from this tab take place once you save the setting. 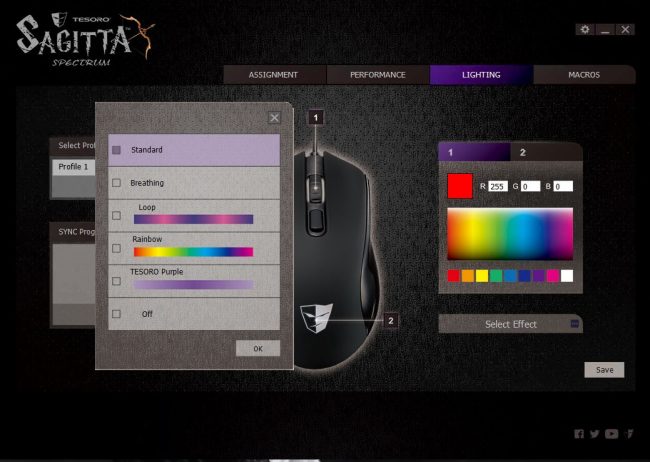 Coming to the lighting tab, we have two zones on the mouse which glows up. One is the scroll wheel while other being the Logo. The Sagitta is set on standard effect out of the box, but there’s 5 other effects along with the option of keeping the LEDs off. Also the LEDs are RGB, so you have the option of selecting any color from the 16.8 pool, and you can have separate colors on both zones. There’s one issue with the pre-defined colors though that they aren’t pure red or blue or green. The Actual green or red would have a reading of 255 while other brackets being zero, so you have to manual select the perfect color otherwise you’re getting a different look than what you would be expecting. 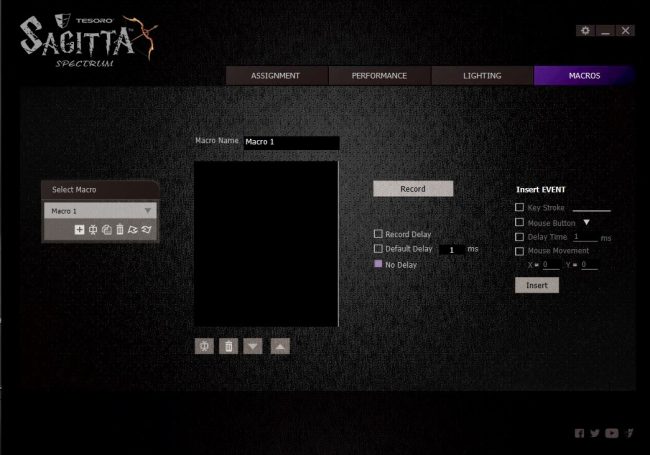 Then there’s the macro tab. The macro recording is really easy on the Sagitta, just create a macro, press on the record, input the commands on your keyboard and press stop. You also have the option of recording the original delay, defined delay and no delay, but you can’t edit the delay speed once recorded. Though you can input any key stroke or mouse function anywhere separately with custom delay. Also, like in most of the cases, the recording doesn’t include the mouse interactions, they have to be inserted separately. 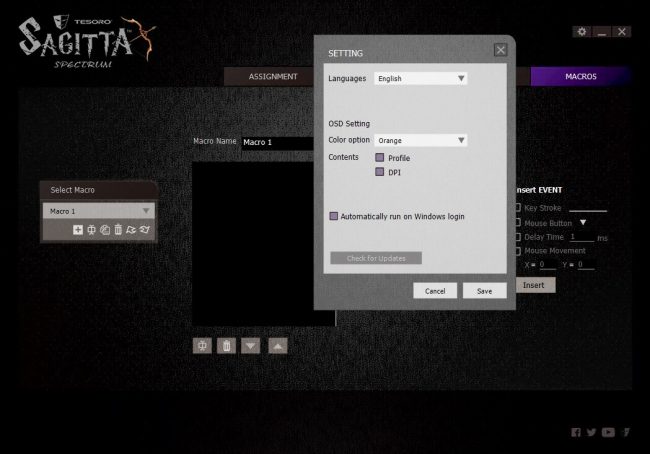 And finally the settings of the software itself which can be accessed by clicking on the gear beside the minimize button on top right. From here you can change the language of the software, set it to run on windows login and change the color of on-screen notifications when the profile or DPI has been changed.

So I’ve used the mouse for about 2 weeks now and my experience can be said somewhere between the good and the bad, not too bad though. My only concern with the mouse was the design on the right side which made it a little less comfortable and the gloss finish on the either sides which becomes sweaty and have to be cleaned.

Other than that, I’m really satisfied with the mouse on the performance sector. The Sagitta has great accuracy and precision and some great options to customize your experience. The Omron switches feels awesome and soft as well while the extra buttons come handy in-game for functions like toggling to items in your inventory or performing macros. The software for Tesoro Sagitta was very easy to use and well oriented on the options and position despite the factor that the software is somewhat pixelated that makes it look unprofessional.

Finally, the concluding factor, the price. Tesoro Sagitta has an MSRP of $59.99 which seems to be the right price for a 5000DPI mouse but considering the design which of course is a -ve factor vs the performance which was the +vs factor of the mouse, the price could’ve been lower. Considering all that, I would like to rate the Tesoro Sagitta 4/5 stars.

Thanks to Tesoro for sending the sample of Sagitta. All opinions are mine and mine alone.