I own 3 Fire tablets in my house including the Fire 7 and an older Kindle Fire HDX 10.1, it has been a while since the Fire HD 10 has been updated and Amazon finally redesigned the HD 10 with some notable improvements that make it worth recommending this model as the best model if you want the larger screen size again.  These include the fact that the screen is now a full 10.1” high definition touchscreen with a resolution of 1920 x 1200 resolution at 224 ppi.  This gives you full 1080p video playback and it includes an IPS (in-plane switching) technology and advanced polarizing filter with a fully laminated display. 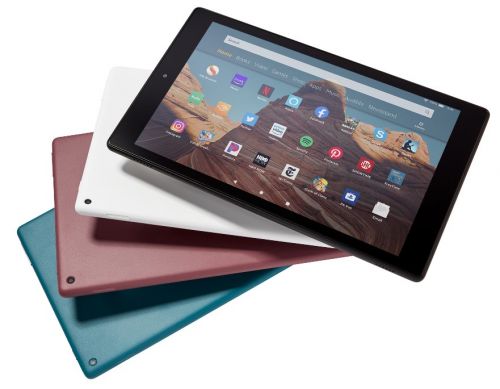 But it isn’t just the higher quality screen, you also get an advertised 30% boost in performance thanks to the 2.0Ghz octa-core processor and 2GB of RAM.  Though I would still prefer to see 3GB of RAM at least it definitely is a step up.  The Fire HD 10 comes with your choice of 32GB or 64GB built in and you can expand it up to 512GB with a MicroSD card but they also give you unlimited cloud storage for Amazon digital content as well.    You get 5 colors to choose from as displayed in the above image, these 5 colors are: Black, White, Twilight Blue and Plum.  There is no case included but you can find a variety of cases on Amazon as well.

The tablet features Dolby Atmos, dual stereo speakers and built-in microphone, it still sports a 3.5mm audio jack and boasts that you can get up to 12 hours of use time that involves reading, web browsing, watching content and listening to music.  Note it does not advertise that battery life if using your tablet for gaming.  Probably the other thing most notable is that the Fire HD 10 finally now switched over to using USB Type-C for power input, and it includes a Type-A to Type-C cable so you can connect it to connect to a PC/Macintosh computer.

With the much easier to use and much faster Type-C USB you get claims that the Fire HD 10 can fully charge in 4 hours using the USB-C cable and 9W power adapter included in the box.  But if you buy the separate 15W power adapter you can get a full charge in 3 hours.  The Fire HD 10 also includes a 2 MP front and rear facing camera’s both capable of 720p video but tablet camera’s are still mostly inferior to phone cameras.

Dual-band, enhanced Wi-Fi promises better signal and more stable Wi-Fi compared to previous models and Amazon boasts that they have over 570,000 apps and games, with over 450,000 Audible titles, and millions of songs. Plus the fire offers Picture-in-Picture viewing with Red Bull TV, Twitch, NBC News and more.  Which is really cool for streamers who want to use a tablet to monitor a Twitch stream while doing something else on the tablet.

The also comes with Alexa of course for hands free interaction, but it also includes an Alexa Hands-Free Mode on/off toggle so you can disable it if you don’t want your tablet listening and waiting to hear if the trigger activation word will come.  Plus if you have kids the Fire HD tablets have FreeTime which is free on every Fire tablet and is a great way to set limits, restrictions and make sure your kids have appropriate game and content access with screen limits. 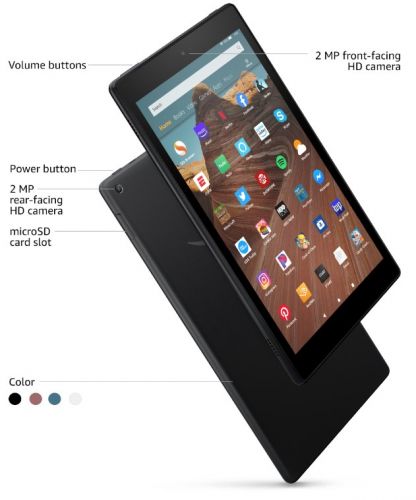 I still like that the tablet has physical volume buttons kept a 3.5mm audio jack honestly. Pick up the Fire HD 10 tablet now and start enjoying the tremendous library of content from Amazon now.