For fans of the Syfy show “The Expanse,” there is a board game that has been made just for you. A game that is quite challenging and one that is specifically made for the show that makes great use of the show’s license. The Expanse board game is a card-based system that up to four players can enjoy. The game basically has players in charge of their own fleet and has them taking on the roles of one of the competing factions, The United Nations, The Outer Planets Alliance, The Protogen Corporation or The Mars Congressional Republic. The game takes place during the first two seasons of the show.

Players will find themselves competing against each other by taking turns using points to allow one to use various actions in the game. Different events in the game can help you move fleets as well as gain influence over your fleets as well as being able to use certain abilities. The card-based system is where you will be using your action points. The cards themselves feature various characters on the show as well as different fleets and areas of the show that can be used to give players an advantage over each other. 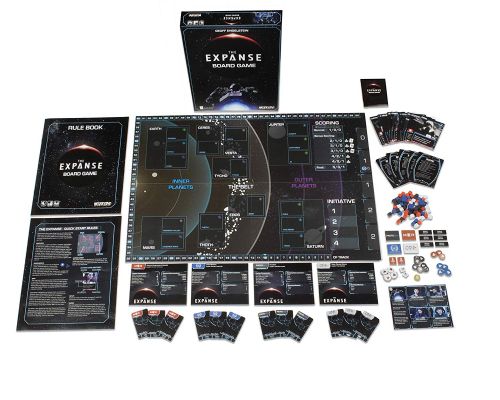 The game is played much in the same way as the board game “Twilight Struggle” however, The Expanse Board Game is a lot shorter of a game to play. Expanse will have you using politics and the aforementioned influence to take over various areas as this game is strictly a game of conquest and which of the player controlled factions can take over and dominate between each other. Games typically last on average of 60 minutes and set up should only take about 20 minutes for those that don’t have any experience in playing the game. Players can win the game after six rounds in which all remaining actions points are accounted for as well as exactly how much influence each player has in the game. Once all the numbers are tallied up whoever has in total the most actions points and influence is declared the winner. The game does not allow players to pick whatever faction they choose as in per the rules the choices are different depending on how many players are playing. In two player games, players are required to play as only Earth or Mars and not allowed to choose the other factions due to them each having their own characteristics that make better use in a full four-player game.

The game comes at a very reasonable price currently on Amazon at only $35.95. I believe this game would be good for anyone to play, however, the game would be better suited for those that are fans of the show due to there being so many locations, characters and more that fans of the show would immediately relate to. Wizkids has stated the game is for everyone due to the mechanics of the game being apparently very easy to learn.