One of the fun things about electronics is that sometimes they can be used in ways not thought of by the designer, like the old Commodore 64 which many years later was used as a server. Another would be using a VCR to record a computer program in a series of black and white flashes and using it in place of a dataset recorder. (Another C-64 thing). But who would have ever thought that that old TOMTOM GPS unit you were about to throw away, could be repurposed into an MP3 player and video player.
Well, it can and then some. I have to start by saying dragonblogger.com is not suggesting you hack any of your devices as some of that activity will void your warranty and if it breaks, we and I, are not to be held liable for any damages. Having said that, let’s look at what I did.

I was at a Goodwill Pound store. The kind where they have huge boxes full of all kinds of things, and you get them by the pound. I saw in the bottom of a box, a GPS device. I honestly at the time did not know what it was, or even if it worked but it was only going to cost me a dollar so I had nothing to lose. 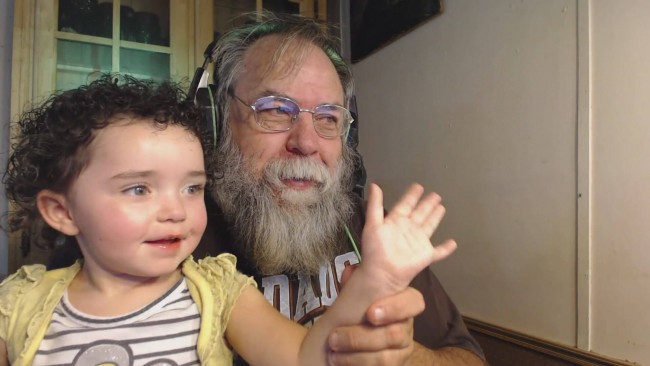 I looked it up and learned it was a TOMTOM one. I found the software, installed it on my PC and after a bit, had it up and almost running. I said earlier that I was not familiar with GPS devices and did not know that in order to use this one, I had to buy a few maps and service first. I sadly could not afford it and to be honest I don’t get to travel much any longer.
I was about to toss it when I got an idea, could I turn this into some kind of Linux computer or something else. After a bit of searching online, I found a website that supposedly had software that would turn the TOMTOM One into a video player. It cost money and also was no longer available. Still I searched.
I chanced upon a site that offered a free MP3/video player (TomPlayer). The site was a bit old, but it was free. So, I gave it a try. It took me a while to figure out how to connect the TOMTOM device to the computer and get it ready to accept reprograming, but once I did, it was easy. I downloaded the software, and installed. I noticed the interface changed. No longer was it a GPS device, now it was all video and movies.

I found two folders on the device that were labeled video and audio. I loaded a few MP3 files into audio and they played just great. I added a movie to the video part, and it froze solid. No matter what, it did not play at all. I was crushed but oh well, nothing ventured, nothing gained.

I used the MP3 player to listen to a few audio books but noticed one flaw if you will, there was no way to stop the story and pick it up later when I wanted to without starting all over. And the video part threw me off as well. I simply could not figure out why it did not work. 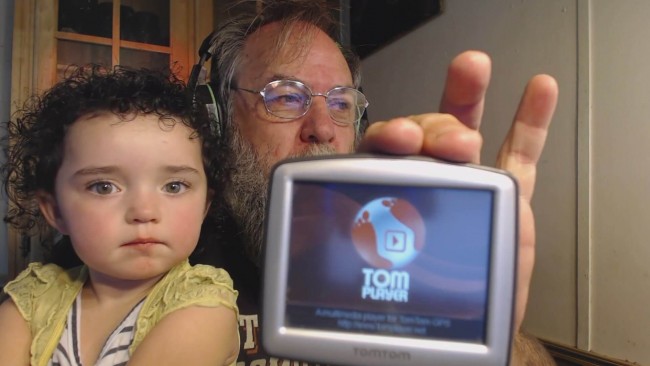 Well, I have had this siting for nearly 2 years in my desk and just recently picked it back up. I did some reading on the web site, and something struck me and said this is important. I realized the screen is small. Much smaller that my 60 inch High Def TV. It would follow that maybe the video needed to be shrunk a bit.

Well, I opened up a video conversion program I previously reviewed, and shrunk the video down to 320×240. I converted it to an AVI and used an XviD codec. I even changed it to a single audio output, since there is only one speaker on the back. I was amazed when the video started playing and playing well. I will admit, that it is a bit choppy, but Aside from shrinking the size, I also used another program and optimized it for web use. My granddaughter loves it. I love it too as it helps to occupy her time while driving, and she is only 3 yrs. old.

There is a small thing to keep in mind, and that is once the Tomplayer software is installed, it is no longer a GPS device. If you must use it again as a GPS device you have to reinstall the GPS software. Also there is a storage limit. It has about 900-940 Megs free. You can try deleting some of the left over GPS graphics and help files just be careful. If you delete the wrong stuff, you have to reinstall the original GPS files and then the Tomplayer software all over again. At best, you will recover a few hundred k worth of space which in all honesty is not much.

The web site explains in great detail the features of the Tomplayer. There are even some really nice looking audio player skins available. Just don’t add too many or you use up valuable storage space. I have a few and use just one. I do recommend a stylus though as the buttons for all the controls are kind of small and hard to select with a fat finger. (My fingers are fat, not yours). Also, to play more than one video back to back, select them before pressing play. Saves a lot of time when on a long drive.

Over all, I love this little toy. It would be nice to have a bit more space to store stuff in, and I am not entirely sure if this will work on all TOMTOM GPS devices. I do know that for at least the TOMTOM ONE, it works great.