Have you wondered about what browsers and OSes Dragonblogger.com’s visitors use? Which Windows version is the most popular? 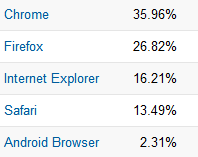 Here are the stats for Windows versions:

Microsoft Windows: The most popular OS of all, and for quite some time now, Windows has had mixed feedback in the past decade, with Windows XP shadowing all OSes for most part of it. Vista was a major disappointment, but Windows 7 more than made up for it. Still, XP remains a very popular choice, installed on over 25% of computers. (http://www.w3schools.com/browsers/browsers_os.asp)

The imminent commercial launch and popularity of Windows 8 will probably decide whether Windows will still be able to hold the OS advantage in the face of the ever-increasingly popular iOS and Android based tablets.

Apple Macintosh: Even after all these years, Mac has remained a relatively minor player in the OS market in terms of sheer volume, despite being at the second place.

Apple iOS: Arguably the most rapidly rising OS in terms of popularity, iOS in combination with iPads and iPhones has always been at the crest of the Tablet PC revolution. Although it is nowhere near Windows so far as overall OS popularity is concerned, iOS has clearly dominated the tablet OS segment.

Google Chrome: Currently the most popular browser across all devices and OSes, Google Chrome is often dubbed the lightest and fastest web browser. The Chrome Web Store is rapidly gaining new developers and extensions, and will probably have as much if not more variety in terms of extensions. Integrating Google Search and Translation features in addition to using the Google Cloud to sync data across multiple devices has probably helped it rocket to the top. The latest stable release (20) and beta (21) versions can be downloaded here:

Mozilla Firefox: Over the past decade, Firefox has gone from replacing to IE as the most popular browser to being replaced by Chrome itself. While percentage-wise it hasn’t been affected much, Mozilla Firefox has a relatively larger developer base for extensions and add-ons which have ensured its popularity. This advantage is no longer significant as compared to Google Chrome. You can download the latest Firefox release here:

Internet Explorer (IE): Owing its popularity entirely to the dominant Windows OS, Internet Explorer has recently undergone a drastic revolution, making it faster, lighter (more resource efficient) and much more stylish with several handy tools and options. Its past sluggishness, however, might be discouraging users from switching back or upgrading their IE browsers, thus severely diluting the vibrant development in recent years. Currently, the latest stable release is IE 9 and IE 10 is in development (expected to be release this year). You can download the latest IE version here:

Apple Safari: Almost entirely used only with Mac OS, Safari has nearly half the popularity as Mac. Apple Safari is quite fast, though almost all Windows users prefer either Firefox or Chrome. The conspicuous lack of enough add-ons, extensions and other options might be largely responsible for its limited popularity. While Chrome has eaten away at the shares of both IE and Firefox, Safari’s usage stats have remained largely unchanged. You can download the latest release of Apple Safari here: