What do you envision of Robots? Emotionless? Cold-hearted? A Cyborg Assassin like Terminator? Cyber-enhanced soldiers like Major in Ghost in the Shell? Or highly inquisitive but full of cuteness like WALL-E ? Matt Dixon believes Robots can also have complex feelings and emotions like humans do. He has been developing the Transmission series – where he tries  to examine feelings and emotion that might be difficult to express in other ways – since 2006. Till now, he has completed over 200 images, across Seven volumes of art books. Together with Adam West from Cross Cut Games, Matt Dixion presents his illustration artwork through a charming but pack of creativity board game – Transmission. 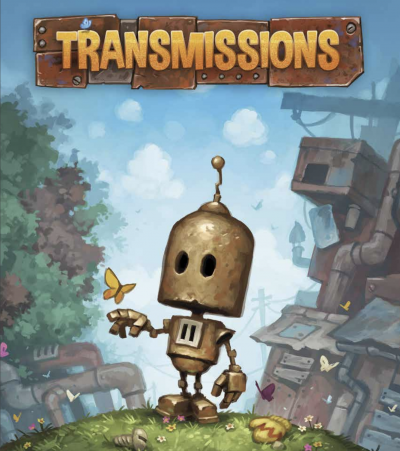 The game play is also straightforward as well. Each player will take turns by moving one of the Robots, and then perform one action. As indicated above, if the moving Robot belongs to the player, who assigns some ideas to that Robot on the player’s board, the Robot can also use the ideas as well.

Transmission presents a very innovative rondel movement, a mechanism to make movement clockwise, and there will be different actions at each location. At the start of every turn, players will take 3 out of 7 Transmission Cards. If they play a Robot card, they have to move that Robot for this turn. If they play a Location card, then they can move a Robot from one of the locations. The moving distance depends on the Robot. Some can move up to two spaces, while one can move up to 6 spaces. The active player will activate the location where the Robot finishes the movement. Then, he or she will refill their hand up to three cards again. How simple it is!

Another feature that I really like from Transmission is the abundant ways to earn victory points. In my opinion, the easiest and most obvious way will be building pipes. Not only will they earn the score by just building them, they will also earn the score for the longest pipe route. The concept of building the pipe makes the games more engaging, since it acts as a mini game for the players. Besides building pipes, players can also earn more points from the items they buy in the Town. Some items can give more points if they are purchased as a set. Last but not least, the most beautiful and surprising way to score points, the presence of birds and butterflies on the ideas, items and pipes. The additional victory points will be the multiplication of the birds and butterflies.

There is no doubt that Transmission  will be the most successful crowdfunding project that Adam West and Cross Cut Games manage. There are so many positive vibes in the games: from multiple ways to score victory points, multiple actions, to the minimum amount of sabotaging or cutthroat. Of course, the credit will also go to Matt Dixion for the vivid illustration and drawings of the Robots. This will be a good addition to family games, or a more casual, laid back game group. It might not be your cup of tea if you are into a traditional Euro style game. 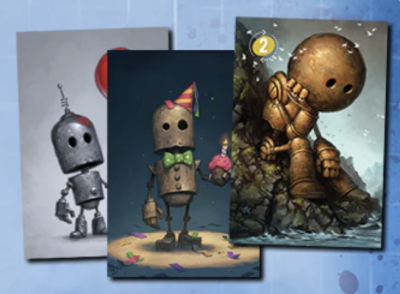 a tranquil but very expressive illustration

Transmission will be available till Friday May 7th, 2021 at 10:59PM. Here is the link to the campaign.

You can find other Cross Cut Games like Wizards of the Wild or the Deadline board game too.