Tropico 4 brilliantly succeeds in combining intricate economical elements with subtle political decisions, to create one of the best city sims on the market. The latest installment that is now available for PC and XBOX 360 owners is the best proof that being a dictator in Tropico 4 is better than in real life.

There is more than meets the eye about being a dictator in a Caribbean republic, and those willing to experiment this flamboyant universe delivered by Kalypso are in for a big surprise. Tropico 4 is much more than a casual city simulator, adding an exciting political layer on an otherwise excellent strategy game. Amazing graphics and alluring sound effects sugarcoat a demanding gameplay, that has enough depth to make it the best choice for players who can appreciate a top quality title.

Tropico is a fictional state, but one who shares many similarities with real countries from Central and South America, enough to add a special flavor to the game. It comes as no surprise that the designated leaders for your emerging democracy, are prominent figures who shaped the course of history in the last decades. You can either choose one of these characters as El Presidente or create your own custom leader, to fit your most rigorous standards.

Either way, you’ll be stuck with a character who’s  pluses and minuses are well balanced and their impact on the actual gameplay weights heavily. A charismatic leader will be more successful in detaining his position and win elections, even if his gambling problems and alcohol appetite are hurting the treasury badly. On the other hand a self made man or a president with an agricultural background will win the hearts of farmers and workers, but will always be derided by intellectuals.

A tough nut to crack 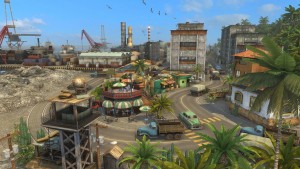 Like any respectable city simulator, this title focuses on developing a prosperous economy and the main tool for achieving this is trading. Raw materials such as tobacco, coffee, lumber or iron are good enough to bring profit in the early stages, but these goods can only carry you that far and exports must be gradually refined. Constructing cigar and furniture factories or jewelry shops to process minerals extracted from the lucrative mines is paramount, to keep a constant flow of cash during late game.

Bankruptcy is lurking at every corner, but is harder to avoid in the first months of your reign, because crops need a long time to grow, so it will take a while before the first harvest. Meanwhile you can’t divert too many funds to industry because the people will starve in the absence of farms, so sooner your later the initial funds will run out. This is in fact the point where Tropico 4  starts to shine and the elements that set it apart from regular city simulators kick in.

Besides the obvious ways of generating profit, such as exports and tax collection, El Presidente has a few other methods of keeping his head above the water and the country floating. The World Bank will lend you additional money, but this debt has to be repaid and if you spend too much of it, the financial organism will impose sanctions and restrains. There are new buildings to erect and new superpowers to interact with, so rising back to power is  going to be a challenge even for an all-powerful  ruler.

Multinational organizations will try to bribe you, by offering significant amounts of money that go straight to your Swiss Bank account. In turn you have to sign a contract that will enslave the citizens to some extent and allow monopoly on some crops, for as long as a decade. For those familiar with the historical controversy surrounding these kind of companies the game will be even more appealing, and the predicaments of making tough decisions will be a constant torment.

Basically, the answer to keep citizens happy is reducing taxes, increasing wages and making sure they have proper housing and access to education and religion. It doesn’t seem like much, but when you are constantly harassed by rebels and face imminent invasion, all these tasks become more than a nuisance. While rebels can be easily dealt with by a disciplined military corps, and even coups are annihilated by an effective secret service, full scale invasions conducted by the new superpowers are bound to bring an untimely end to your reign.

The Almanac is a precious tool that helps you monitor the way people perceive you as a leader, with the attitude each faction has towards you and what would they need, to like you even more. You can praise a particular group, institute a tax reduction, grant extra food or make some promises before preparing elections. If all these methods of improving your image fail, then there is always the option of rigging the elections and stay in power even when the whole country loathes you.

2011 was not a good year for real life dictators, but in Tropico 4 everything is peachy so this is one of the few games that deserves 5 stars our of 5. Take a look behind the fruity curtain in this trailer: