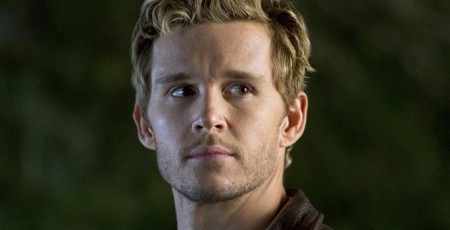 Reminder that this post will contain spoilers of this episode.

We Start the episode seeing Eric and Jason together. While I do find most of the sex and nudity for this show a bit over the top and not needed, I didn’t mind at all where this was leading.

Jason finds Eric and tells him that he can’t get him out of his head.  They have some playful banter and a bit of pushing and shoving and next thing you know they are making out.   As soon as Eric goes down on his man, Jason wakes up from his fantasy sitting in a church of all places.

Jason now meets up with Sookie and Alcide.   Bellefleur and Sam and the others are trying to figure out how to continue their search for the H-Vamps. Sookie suggests that they find out where the H-Vamps were last so they can learn more about what is going on. She mentions the dead body she found last episode and takes them to it. They search the body and find her Id  and see she is from St. Alice, Louisiana which only a couple towns over.

They all head over to St. Alice and find that it’s deserted. There is lots of graffiti everywhere with messages like “FEMA help” and “SOS.” Sookie discovers a pit filled with dead bodies.They realize the whole town has been killed.

They head to the house that belonged to the dead body to see if they can find clues as to how long the infected vamps were there. After finding some pizza out on the table, Jason takes a bite and says they were in town about two days ago. Andy vows that he will never let Holly out of his sights again if he finds her. A man is nothing without a family.

Sookie finds the diary of one of the captured girls.  She feels guilty for reading until it references falling in love with a vampire. As she reads it, there is a  flash back to Sookie and Bill’s first time going to Fangtasia together.  Alcide can tell the girls story is making her sad, reminding her of her past and tries to comfort her.

Driving back to Bon Temps, Alcide suggests they just keep driving and run away for good.  Sookie says leaving would not help anyone and she is dedicated to saving her town.

The arrive back and Sookie tells Alcide to go take a shower then Sookie sneaks out and goes over to Bill’s.  When he opens the door she asks “Can you still sense my fear?”

Sam is talking to a crowd of people, telling them that they need to be of service to one another to take their minds off the recent attack. He convinces them to go clean up his restaurant.  Lettie Mae uses this motivation to go and check in on Lafayette. Lettie Mae asks for help summoning Tara back, but Lafayette insists she’s dead and there’s no saving her.

She returns home and is cooking dinner.  Lettie Mae burns herself while cooking.  At first it was a small burn but she put her hand flat on the pan to burn herself more severely. She runs to the church basement and wakes up Willa for some vampire blood. After she drinks it she has another vision about Tara.  Tara is tied to a cross with a snake wrapped around her. I guess this is how we will continue to see her through the season even though she is dead.

Adilyn wants to go stay with Rocky and Wade. Andy makes her promise she’ll be back an hour before dark. He reminds her that Jessica can not be invited in at night.  Jessica at this point is in Andy’s attic and still unaware she has already been invited in last episode.

At Sam’s bar the people are cleaning up the mess caused by attack from the beginning of the first episode.  Vince tries to turn the town people against Sam by telling them that their mayor is a dog (shapeshifter).  He convinces them that Sam can’t be trusted, they all begin grabbing utensils and furniture around the bar that can be used as weapons. Adilyn who read the mind of 1 woman takes Wade and sneaks out to warn police station they will come there for weapons.  Just as they are about to secure the weapons, Vince and company come in and ask for weapons.

Kenya is reminded that she’s taken a lot of crap and been let down by Andy time and time again. She has a change of heart and joins the crowd and starts sharing the weapons.  As Kenya goes to restrain Adilyn, she fires off with a spell which triggers Jessica as she can tell Adilyn is in danger, but she can’t leave as it is still day light.  The town people manage to restrain her and Wade and lock them in a cell.

Jessica is trying to call Adilyn and Sookie from her cell phone since she can’t leave the house.  Andy returns home to find Jessica and no Adilyn. Jessica tells him Adilyn is in danger and asks him to help her search for her once the sun sets.

Vince and Kenya train the people of Bon Temps to shoot.  The crazy is setting in hard for these people. 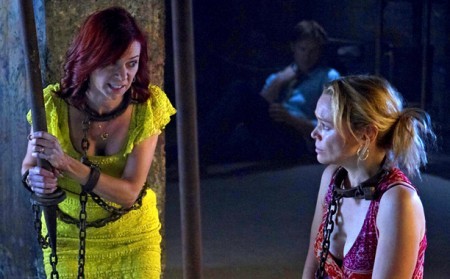 There is drama at the H-Vamps’ Fangtasia camp because one of them ate and killed one of the humans without permission. They are to sick to hunt all the time and needed the ones they have to share so they can eat every hour. Betty is named the new reaper, the person who selects which of the prisoner humans they’ll eat next. When she goes downstairs to pick  who is the next meal, Arlene tells Holly that she recognizes Betty because she used to teach their kids.

They get her attention and Arlene offers an impassioned speech about having the opportunity to free a couple of good people in her final days. Betty feels conflicted but says she will “figure something out.”

Her plan is to become the sleep monitor. That is the person assigned to watching over the H-Vamps while they try and rest. After receiving approval for this position, Betty goes downstairs to help get the ladies out.  As she is very sick and weak she asks if she can feed first. The marks need to be on Arlene’s leg so they have a way of covering this up if the other H-Vamps find out. Arlene agrees, but as Betty is feeding she suddenly blows up. Now they have to find a new way to escape.  Since no one is noe there to wake up the infected vamps I wonder if they (the vamps) will all die leaving them trapped in the basement chained up.

Pam is now in France looking  for Eric. She finally finds him in room where he’s refusing to drink any blood. You can see the infected marks on his chest poking out from his shirt.

Can’t wait to see what happens next. What did you think of the episode?

Photos are from imdb.com