Falling Skies is an all new, original series on TNT produced by Steven Spielberg. The show starsNoah Wyle (ER TV Series), Moon Bloodgood (Terminator Salvation), Drew Roy (Secretariat), Colin Cunningham (The Sixth Day (2000)), Steven Weber (Leaving Las Vegas), and Will Patton (Armageddon (1998)). In this episode, Mason and the resistance group, the 2nd Massachusetts set out to attempt to rescue his son Ben from the alien invaders.

The resistance is back, and in this episode, Mason (Wyle) gathers a team of fighters to attempt the rescue of his son Ben who, among others, has been captured by the alien invaders, and is forced into salve labor. In this episode, we learn a bit more about the harnesses worn by the captives–along with learning about the doctor with a safe method for the removal. We’re now deep into the third episode, and there still isn’t a clear reason as to why the aliens are on Earth in the first place. 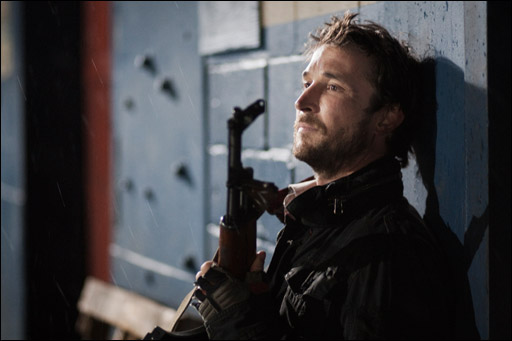 Michael Harris (Weber), a new doctor that has joined the 2nd Massachusetts offers his understanding of the harnesses and the alien biology, with a keen method for removal. Apparently, it’s as simple as adding a blowtorch to “unhinge” the linking appendages. What it does, is it slowly severs the chemical, or biological, bond of the aliens and their hosts. It’s theorized that the harness injects a chemical into its host, and embeds itself into the nervous system–so if it’s suddenly removed, the host dies.

These details inspire new hope in Mason–and in the other parents of missing children–because once he is able to rescue the other hostages and his son, there is the chance that they will be able to survive. Spielberg always wants to include and allow for the “human” and emotional element, for attachments to the characters he creates–a constant reminder to instill a bit of “humanity” into the show.

Also, Michael gives us a little more background as to what happened to Mason’s wife–pertaining to how she was killed. This doesn’t only facilitate trust between the two, but offers some closure for Mason. Now, this is what I appreciated about this episode–more of an insight on the series’s plot and it’s project development, giving more of a clear-cut plan on just how the 2nd Massachusetts planned on recruiting more people into their resistance. That, and just how they’ll survive and drive the alien infestation back to where they came from. It’s as if we, the viewers, are intentionally being left in the dark as to the true intentions behind the alien invasion. 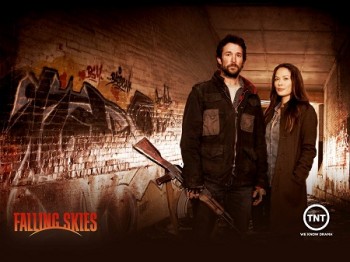 Armed with a small band of rescue operatives, Mason now descends on the area where the hostages were being kept for labor by the Skitters–along with Mech guards. His son, Ben is there, along with the other children. However, plans to rescue him–and possibly the other hostages–are thwarted when one of the men recognizes one of his own–then dashing off to rescue him–causing a battle to ensue. Mechs and Skitters attacked the resistance, knocking Mason unconscious–forcing him to miss the opportunity to get his son back.

Meanwhile, back at the resistance camp, Pope (Cunningham), captured in episode 2, did not like the prison food he was being offered. So now, he will be the for the 2nd Massachusetts; which I thought, was a pointless side addition to the show; however, it did serve to show how the individuals are trying to find improvements to enhance their quality of life with what they have. We viewers also got a bit of hand-to-hand combat action in this episode, from the explosive rescue attempt, and when Mason went one-on-one with a Skitter, which, I might add, offered impressive CGI–the Skitter climbing the walls and ceiling–pouncing on Wyle’s character, and getting in a few good “punches,” just before being bashed across its alien face, and receiving shot gun blasts to two of its legs–then being dragged, hopelessly alive to the resistance base, thereby giving the episode its due title–“Prisoner of War.” Which reminded me of a scene from the 1996 film Independence Day, when Will Smith’s character dragged an alien corpse through a checkpoint, and used it to enter the base at Area 51.

Yes, they still carried about during the day without a worry of being pounced upon by the invaders, and there were some hints at a romance between Wyle’s character and Anne. But I will, however, applaud the “Prisoner of War” episode for being a bit more engaging in the story this time around. Although I still have my apprehensions for this being “the” hit TV series of the summer. Alas, I still remain a sucker for all things CGI and shiny. Let’s see just how long “Falling Skies” can hold my attention, shall we?