[easyazon_image asin=”1595827374″ alt=”Falling Skies” src=”http://ecx.images-amazon.com/images/I/510xWFXzqiL.jpg” align=”right” width=”275″ height=”416″]Falling Skies is an all new, original series on TNT produced by Steven Spielberg. The show starsNoah Wyle (ER TV Series), Moon Bloodgood (Terminator Salvation), Drew Roy (Secretariat), Colin Cunningham (The Sixth Day (2000)), Steven Weber (Leaving Las Vegas), and Will Patton (Armageddon (1998)). In this episode, Mason and his crew from the 2nd Mass is sent on a mission to retrieve motorcycles, with Pope in tow. Will they succeed? What about the skitter they captured in episode 3? Curious? Read on.

In Dr. Anne’s attempt at trying to “read” the Skitter ‘reactions’ in order to reveal something about why they were there—which is still is a mystery–didn’t tell her their plans anyway. Mason is still trying to locate Ben, who was abducted when the aliens invaded Earth, but first, they need to procure modes for transportation, because that old hooptie they’ve been riding in isn’t enough. Pope (Cunningham) tipped the 2nd Mass on just where they could find some motorcycles, that could be used when Mason makes the rescue attempt, again, at finding his son Ben. Pope, Mason, and members of the resistance head out to find the motorcycles—while Dr. Harris and Anne debate on the best way to interview or gather more intelligence from the prisoner. 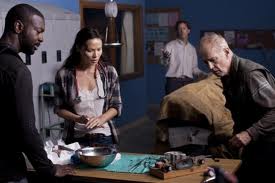 On their way to the motorcycle storehouse, Pope “smells” Skitters—who are sleeping, hanging upside down from an overpass. Now, even though the resistance can travel throughout the day in broad daylight, making all kinds of noises as they go—why didn’t the Skitters “hear” them from a mile away? Mason and Pope practically conducted an entire conversation just below them. Pope wanted to kill the Skitters right then, right there–and Mason, wanted to stick to the mission. These must have been the most tone deaf aliens I ever seen. Mason has become the most annoying character on the show.

We all know that the only reason he is with the resistance and that is to rescue his son. So he has to do these “tasks” for supplies in order for them to cooperate with his “rescue mission.” Honestly, I am waiting for him to say “screw this! I’m going to find my son!” But he won’t. Because that will probably make for a better episode. What really disturbed me in this episode, was the introduction of prayer. One of the female characters in this episode was saying a prayer for the missing, when Captain Weaver looked over at her, and asked her, well told her “you still believe?” I hope that was the end of that. Back to Pope and the resistance, Pope and Dai (Peter Shinkoda) had to gather fuel for the motorcycles and the predictable happened—Pope knocks Dai across the back…steals a motorcycle and gas can and head to the bridge where the Skitters were still sleeping (yawn). 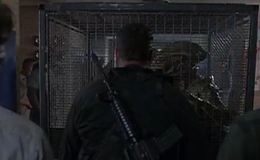 Back to the resistance headquarters, Mike (Martin Roach), who in “The Prisoner of War” episode, ruined the mission to find Mason’s son Ben—is at the bedside of his son when he wakes. After not recognizing his father—he looks over to the caged Skitter then asked his father “who are you?” Was it telepathic communication being used by the captured? Anyway, Mike rushes over, demanding some type of communication from the Skitter (even showing the pictures of Earth and a sheet of math homework). When that failed, he shoves his gun in the back of the throat of the Skitter, and it goes down for the count. So far, I got that the slightest hint into finding out how the aliens communicate—lies in a static radio. However, what was interesting, it is observed the Skitter communicating somehow to Mike’s son—because after the Skitter fell, Mike’s son rises from the operating table after his father, Mike left the room, and then reapplied the harness! But what we learn in this episode, is that the Skitters have telepathic control of the captured children. The harness is the key for the communication. 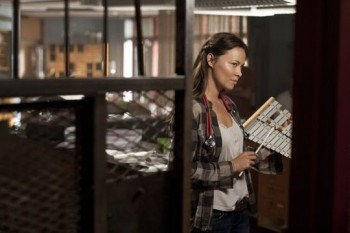 There is a lot that I do like about [easyazon-link asin=”1595827374″]TNT’s Falling Skies[/easyazon-link]; the CGI, the central characters, and the creative design of the Mechs and Skitters. However, I am annoyed that these “survivors” are allowed three square meals daily—annoyed that they are so clean! I am in total conflict over the entire show visual production—no sweat, no blood, and no conflict. Come on, the show is about survivors! This is supposed to be about a world where their livelihoods are destroyed. Death. Destruction. Happiness, and healthy-livin. Which makes it totally unbelievable that they are in a fight for their lives.

Every scenario is intact. There is not an opportunity to at least allow for the viewer to pick sides. Everyone performs as if they are following some form of law, where there isn’t an animosity among the survivors, they just get along all too well. Pope is there. Tethered and humbled. But he is there. I want to see a fight. I want to see a true struggle and not just Mason referring to his abducted son and his favorite Harry Potter read.

I am not too certain that the writers have the script just right yet. The special effects are there, the environment is there, and the premise is there. I believe that they are trying to run too many scenario’s all at once; and fumble to bring it together in the end. The focus need to get back to the shows initial premise: alien invasion—resistance—survival.