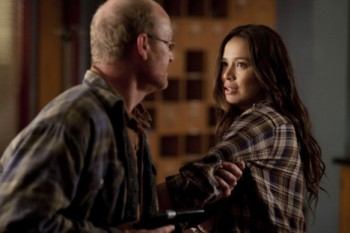 Woah. This episode teetered on being one of the BEST for this first season of [easyazon-link asin=”1595827374″]Falling Skies[/easyazon-link]. We are now getting into resistance drama and interaction between the humans and aliens and; we now have a bit more clarity on what may be the reason behind the alien invasion: they want our kids. Let us review what happened in this season’s near finale, part one, ‘Sanctuary.’

Be careful, Dr. Anne (Bloodgood)! It seems that you have been on the defensive as of late; first with the imprisoned skitter and now your own human counterparts are attacking you. Time to gear up, girlfriend–tuck your 9mm tight because it seems that before the season is over, you will need it. Not only was Dr. Anne jacked for antibiotics and painkillers to sell and or trade, she was robbed of her confidence in trusting the people she is charged to care for in the 2nd Massachusetts. No worries, her friend and comrade, Margaret (Carter) is going to show her how to use a gun. A friend in need, perhaps? 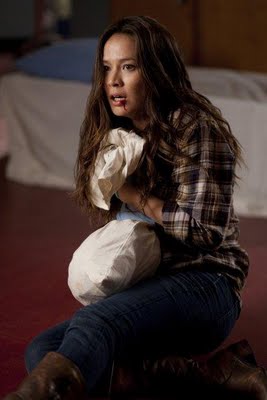 Meanwhile, Mason (Wyle) and Weaver (Patton) set out after the rouge family, whom are chased into an alley. They run into Lt. Clayton of the 7th Mass—who helps to retrieve the missing meds from Dr. Anne’s exam room— Lt. Clayton is also a bearer of bad news: the 7th Mass was hit by a massive skitter/Mech attack and he’s there to warn them that the 2nd Mass is next. From the moment I heard this news, I knew that there was something suspicious about the alleged attack on the 7th Mass. For one, why Lt. Clayton was the only person to come to warn the 2nd Mass? Never matter, something is definitely up—and not surprisingly—my suspicions were correct.

Mason’s son Ben is back to being himself, somewhat, and Hal is suspicious of the new, more mature Ben. Not only is Ben pushing over 100 pushups—while listening in on his conversations with their younger brother, Matt, he learns that Ben considers the skitters as caring-—more like a family than an alien menace the rest of the 2nd Mass portrays them as. “It was as if they knew what you needed, before you knew what you needed.” As if the skitters were thinking “with them.”  He even admitted that he sort of “missed” being with them. Suffering from skitter induced Stockholm Syndrome, or is this a different Ben? Hal seems to think so. During lunch one of the adults in the 2nd Mass referred to Ben as a “razorback,” and more of the adults are becoming strangely uncomfortable being around the rescued kids.

Queue the mech and skitter attack. More like one mech and one skitter. Either way, this attack persuaded Mason to go along with Lt. Clayton’s (Czerny) plan on sending the kids ahead of the attack. 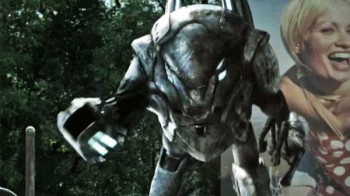 After the “attack” on the 2nd Mass, Lt. Clayton emphasizes the importance of sending the children of the 2nd Mass to a safe haven until the alleged alien attack is over. Mason and Weaver were hesitant to this idea in the beginning, but after the attack, Mason gave the go ahead, and had Mike to accompany the kids to safety. Bad idea, maybe?

Meanwhile, the kids arrive at the 7th Mass safe house, although I could tell immediately tell that something was not quite right. When the kids were directed to go and rest. Lt. Clayton went to visit one of the kids who were eager to see his parents. He was then guided to a clearing, where a young girl was their waiting, as well as a mech and skitter. When the boy was knocked unconscious, the girl asked Lt. Clayton if there were going to be “more kids” as promised? He agreed, of course, and headed back to the 7th Mass hideout– and what do we viewers find here? Pope, handcuffed, battered, and bruised. It seems that Pope was the one that gave information to the 7th Mass as to where they would be able to find more kids! I always knew he’d be a bastard!

Not only did we learn that the skitters were using the captured children as slaves, but now as communication devices? Sweet! There were a few laughable misses in this episode, but it has lead viewers into a most curious season finale!

Pope, what have you done?