Less than a week ago I received my invite to Spotify and within 2 hours of testing the service I purchased the premium package for $9.99 per month.  This is my review of Spotify Premium and why I truly believe it will help revolutionize the way we store, share and listen to music. 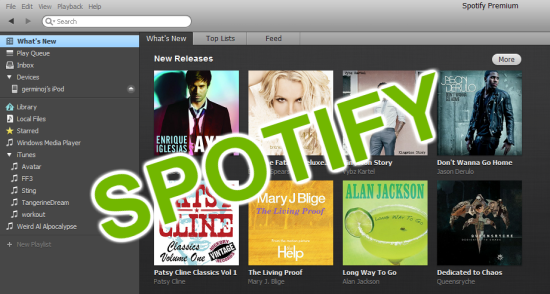 Spotify is a music streaming service that also functions as a multi platform cloud where you can share and store music from your local libraries as well as purchase music to add to your digital libraries.  Spotify gives you access to millions of songs online and you can play them immediately without any strings attached with the free service.

(Note, the free service is still in invite only and you can scroll down to the bottom of this post to enter the contest to get an invite).

Spotify is probably the best application to help combat the issue of music torrenting because you simply subscribe and have unlimited access to all the music you want for a low monthly fee.  The library includes just about everything I could find including all the latest top charts and old classics like I was able to find just about everything from the Blue Oyster Cult on the Spotify catalog.

Spotify allows you to seamlessly build playlists that comprise of both your locally owned and online files in the same playlist.  Combine this with the ability to mark a playlist as offline with the premium service and you can build your playlists on your PC and listen to them anytime on  your Android or iPhone. 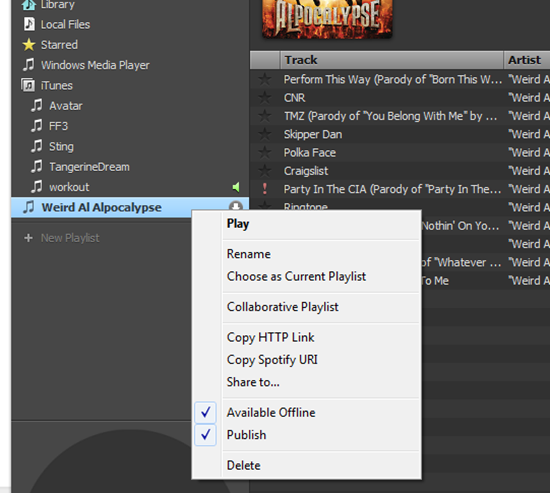 Spotify lets you store a total of 3,333 files in offline mode before you have to release some to add more to offline mode.  This means at any time you can “borrow” 3,333 files from the online Spotify catalog and get access to them from a device that has no Wi-Fi or Internet connection provided you made sure the client loaded up Spotify to sync prior to going off the grid.

When using Spotify you simply search for an artist, album, song or anything and you will get results that display.  In my test search for this review I searched for “Weird Al” and was provided with a list of results that included my local and online files.

There is a little musical note icon on the right hand column which indicates if a file is from your local library.

When you see search results you can drill into any Artist, or Album and immediately pull up all matches for that artist or album.  You can also select entire albums, or tracks and add them to a custom playlist including the ability to then mark that playlist as offline mode.

Spotify is a streaming application so by default it expects your device to have wi-fi capability and support the Spotify app.  This means Spotify is ideally suited for iPhone, iPod Touch, Android and other smart phones and the PC itself.

Spotify does support traditional MP3 devices including the iPod Nano and non-Internet enabled iPod’s however it has some restrictions and caveats.

The first is that it requires you to “wipe” or factory restore your iPod in order to use the Spotify service with it.  This really means you can’t use your iTunes and Spotify for the same iPod device.

The second is that you can only sync playlists and files that are local in your library and/or that you have “purchased” from Spotify.  You can’t sync any offline playlists to your iPod Nano because it won’t actually put the files on your Nano.  This is to prevent song piracy and copied songs from being stripped of your Nano and re-downloaded into iTunes or some other media management program.  Offline playlists only work through a Spotify application.

Despite this limitation Spotify is a great choice for syncing to your iPod because it is lightning fast compared to iTunes when it searches your local library.  Though if you store both pictures, video’s and other files on your iPod then Spotify isn’t the service for this functionality.

I tend to find new music by people recommendations or even recommendations from the music service I am using.  I like that Pandora will try to play “similar” music based on your lists and help you find new content.  Spotify allows friends to share playlists giving them access to listen to each others files and recommendations instantly which is fantastic, but there could be more of a recommendation feature based on your previous listening patterns as well.  I think this is a feature that Spotify can use going forward.

Spotify will abruptly stop a song or start it when you click the pause button, this is a minor annoyance but I got used to the Winamp default which fades the volume quickly so that it is less abrupt on the ears.

Right now in order to use Spotify on your mobile device you have to purchase the Premium plan for $9.99 per month.  The $4.99 plan is for unlimited ad-free music on your PC.  Spotify should offer a happy medium package at $4.99 for maybe 500 plays per month or something from any device.  This limited use is ideal for people who only listen to music a few hours a day a couple of times a week but don’t really feel they will get their money’s worth with the $10 per month plan.  Also since all music has to be played through the Spotify app there should be no reason why they can’t track and restrict the number of plays per month.  They already track the number of plays to report to the record labels and companies.

Spotify only has an iPhone app which works on the iPad but they should have a dedicated iPad applications so you can read the search results more clearly and blow them up without the blur that occurs when putting iPhone applications in 2X mode.

The contest to giveaway a Spotify account is closed, I have no more invites to giveaway but if I gain more I will open up the contest again.

Content Creator/Owner of https://t.co/iWP6afuOc9 for Tech, Game, Entertainment and streamer at https://t.co/594fXMdMIA
MIEMIE Dog Booties - Will My Dogs Wear Them? #BostonTerriers https://t.co/ASSNFE108C - 4 hours ago